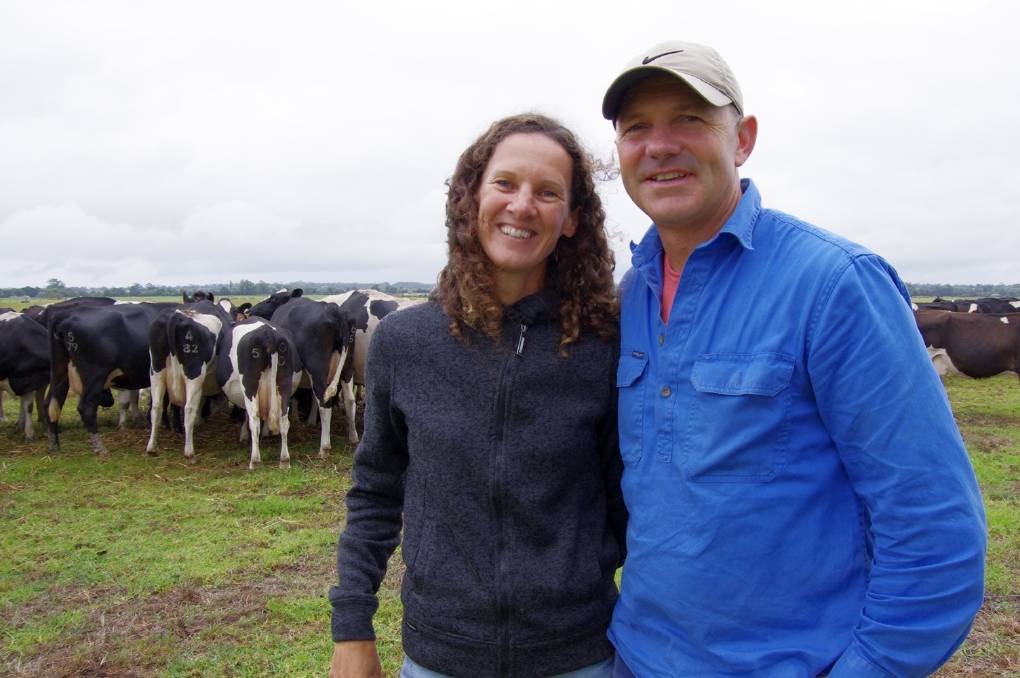 Narelle and David Macalister transitioned to OAD milking after evaluating their business and lifestyle. Three years later it is a decision with which they are still happy.

Practitioners of once-a-day milking and others interested in the logistics of implementing it attended an information workshop at Orbost, Victoria, earlier this year.

Practitioners of once-a-day milking and others interested in the logistics of implementing it attended an information workshop at Orbost, Victoria, earlier this year.

David and Narelle Macalister, who hosted the workshop, are in their third season of full season once-a-day (OAD) milking. Stu Griffin, a veterinarian and sharefarmer, in his first full season of OAD milking also spoke.

About 30 dairy farm businesses in Gippsland have changed to OAD milking and the interest from other farmers was the catalyst for GippsDairy to organise an information day, the organisation's Louise Sundermann said.

She recommended those who were interested to talk to farmers already using OAD and to access online resources. "DairyNZ has some good resources," Ms Sundermann said.

Devondale-Murray Goulburn's involvement in the workshop was precipitated by a number of dairy farmers who inquired about OAD milking, MG field officer Marion French said.

"Clients have the desire to know more about how the system works and how to transition to OAD milking. Their motivation to go to the dairy twice a day was challenging," Ms French said. "A major concern was in-calf rates."

Feeding is pasture based. Silage and hay are cut every year and in the 2015-16 year, the self-replacing herd received 0.45 tonnes/pellets/cow - half the amount fed before they switched to OAD milking.

For them, the choice of moving to OAD milking was clear. "We made the decision to milk cows OAD or not milk at all," Mr Macalister said.

Production fell about 25 per cent on volume in the first year. Mr Macalister estimated heifers lost 30 per cent production in their first season. At the spring peak, cows now average 19 litres.

"As they drop back to 18 litres, I start feeding pellets," Mr Macalister said.

"Sometimes I feed silage twice a day because of the season, but there's no hard-and-fast rule about this. I think there's better grazing by the cows, now."

Milk solids dropped from 400 kilograms/cow when they were milking twice-a-day (TAD) to 320kg/cow in last season's full OAD milking. He estimated that would lift to 340kg/cow this season.

"In-calf rates have improved, so we no longer have any carry-over cows," Mr Macalister said.

"When we were milking TAD, 20-25 per cent of the herd was empty at 10 weeks and we had 50 per cent conception with artificial insemination (AI).

They do not use a synchronisation program. Future plans included reducing replacements from 25 per cent to 15 or 20 per cent of the herd and selling the excess at point of calving.

"It was something we'd talked about but couldn't work out how to do without separate herds," Dr Griffin said. "Installing an auto-draft gate in the 26-double-up herringbone helped manage it."

Other motivations were an expected improved fertility and in-calf rate.

"The overall herd empty rate was 11-15 per cent; heifers were up to 25 per cent empty as first calvers," Dr Griffin said.

"The empty rate has dropped to seven per cent."

While making the decision to transition, the milk price dropped.

"So we did a budget and put our business case to our discussion group," Dr Griffin said. "There are six farmers doing OAD milking in our 10-farm group.

"So we've been exposed to it for a few years and we needed to work out how it would work for us - supporting three families, including the labour unit's family, us, mum and dad.

"Talking about it helped us make the decision to move the entire herd across to OAD."

In 2016-17 season, the entire spring-calving herd of 418 cows was milked TAD for the first few days after calving, then OAD.

"You pay more attention to those cows," Dr Griffin said.

"We cull for mastitis in repeat offenders and older cows," Dr Griffin said. "As heifers come into the system, higher cell count cows will be first out the door."

They plan to milk two herds OAD from next season, both in the morning.

"The second herd will be milked after school drop off," Dr Griffin said.

This decision was mostly due to the size of the dairy.

"We have never considered milking 540 cows twice-a-day through our shed, we would have had to invest in a rotary dairy," he said. "A single, longer milking is much more palatable."

Upgrades in the next season included track and pipe work and seeding an additional 40 hectares bought next-door.

"We might need to upgrade our chiller unit in the next couple of years," Dr Griffin said.

Pasture management also needed to change. About 30 per cent of the farm is sown to chicory for summer-autumn grazing.

"That's based on a TAD milking system, where the cows went on to chicory for overnight," Dr Griffin said.

"Now we'll have to reconfigure how we manage that. Under OAD, cows have to be moved in the afternoon to their chicory allocation. Maybe we'll sow some of the paddocks to one-third chicory.

"I can't wait for virtual fencing to become commercially available and affordable."

"And we'll be keeping a close eye on the herd to work out which cows are suitable for OAD," Dr Griffin said.

"We thought that to have a reasonable lifestyle, we needed another option," Mr Macalister said. "I can spend time with the kids when they get home from school and I get to watch them at junior sport on Saturday morning."

His evolution from traditional TAD to OAD milking was stepped across three years. In the meantime, he researched the information available and spoke to other dairyfarmers.

"We did it for a few months at a stretch every year for three years," he said. "Then Richard Humphris recommended we go the whole hog."

The couple transitioned from two milkings/day to three milkings in two days (milking every 16 hours) to full-season OAD.

"There was very little change in cell count. In our first full season, we found we didn't have cell count issues we were expecting.

"We've found you have to manage cell count the same as you'd do with a traditional milking."

Three cows showed cell counts at one million-plus. "We choppered them straight away, same as we would have with two-a-day milkers," Mr Macalister said.

"The hardest thing was time management during the transition period. Getting up and getting the cows in for a 2am or 4am milk or going out to the dairy after the kids were in bed was challenging. But production loss was very minimal."

The dairy is a 20-swingover herringbone. "It lends itself really well to OAD milking," Mr Macalister said. "Working alone, you can get 120-140 cows through per hour. And there's opportunity to look around and check cows and equipment."

"Electricity and water are about two-thirds of TAD milking," he said. "The reduced grain intake also saves money.

"I think the cows finish the season in better condition, so they're stronger at calving and recovery."

After calving in spring, for the first three to four days fresh cows were milked twice-a-day in a separate herd until their milk was ready to go into the vat.

The feed regime remained unchanged, with 1kg/day grain supplements."Maintaining the feeding schedule is very important to cows," Mr Macalister said. "In the first full season, a lot of cows put a lot of condition on; but that has adjusted.

"We have more than 70 heifers coming into the herd in two years."

It is a necessary increase in production numbers - the couple recently bought the farm next door and were looking to build their herd.

"Next year will be the first heifers coming into the herd, from cows performing well as OAD milkers," Mr Macalister said.

"I can keep working through the afternoon without getting distracted or delayed by afternoon milking and I have the mental energy for projects," Mr Macalister said.

"Laneways and other equipment are better maintained.

"We make our own silage and hay, so OAD has enabled me to make that decision to wait until the ideal time of day to harvest - the alternative was to push afternoon milking back.

"Maintenance problems can normally be sorted because they happen early in the day, you can get on it yourself or call someone and you don't have to leave it for afternoon milking.

"Or in summer, I milk, feed silage and then we - as a family - go to the beach for the day. In the autumn, I'm able to spend time at the kids' sports - after school and Saturday - and not have to rely on a relief milker who probably has the same family responsibilities.

"Calving is still long days but it's more manageable.

"And I could improve on pasture management - shifting the tape twice a day rather than have cows push through it."

David Macalister's last word on OAD milking: "After 9am, I'm a beef farmer."

Dr Griffin said OAD required farmers to improve their milking skills."You need to milk a cow out fully, so things like Cups On Cups Off are critical skills to gain," he said. "The other thing - you want to milk them out fully to gain full production from them. Otherwise, you can get suppressed production."Cups coming off early may be a technique used to speed up milking time, particularly using TAD, but it can affect production and cow health."D