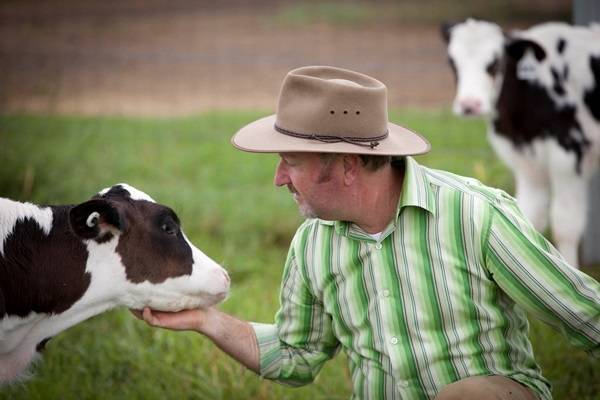 Moving with the times: Greg Dennis is about to start supplying the local market with his own milk. Photo: Paul Harris

As both Coles and Woolworths announce major changes in how they source milk that are designed to show they support farmers, there is another quiet revolution under way in the dairy industry as farmers like Mr Dennis strike out on their own.

"If you are trying to negotiate a price with big processors these days, there's no negotiation. You have to take what they offer you," he says.

"It got to a point for us where we couldn't see a very dysfunctional system changing for the better."

The Dennis family had supplied milk to processors for decades but became disillusioned when processor Parmalat sought to slash the price it paid them by 25 per cent last year to a level Mr Dennis said would be unsustainable.

Convinced that a farmer could not win in negotiations with processors, Mr Dennis decided to join them, but do things differently. The fourth-generation farmer has spent $1 million installing a milk processing plant on his farm at Tamrookum, in the Scenic Rim region about 90 kilometres south of Brisbane, and buying a truck to distribute the milk to shops.

His Scenic Rim 4Real Milk launches in six weeks. He says more than 40 shops within 100 kilometres, including independent grocers, service stations and cafes, have agreed to stock it so far.

The farm produces about 6000 litres of milk a day, from a herd of 240 cows, and to make the venture work, Mr Dennis says he needs to truck about 100 litres a day to each of 60 shops.

Part of his business plan involves tapping into nostalgia for the days when milk came from local dairy farmers and his product range includes creamy, non-homogenised milk in silver-capped 750 millilitre glass bottles.

"Most people would agree that milk tastes better from glass and it's probably better for your health," he says.

He will pitch his milk as a premium brand but also wants to keep it affordable, offering two-litre plastic containers of homogenised or non-homogenised milk for $3.80 to $4 and one litre containers for $2.10.

It's a strategy that has a lot in common with the Farmers' Own brand concept being explored by Woolworths.

The supermarket announced in recent weeks that it would buy milk direct from a small group of farmers in the Manning Valley of NSW.

It will market it as fresh and local, and sell it at a higher price than discounted private label milk, which has sold for $2 for two litres since the discount war with Coles began in January 2011.

Farmers have generally been positive about the supermarkets' move to sideline the multinational processors but Mr Dennis is sceptical.

"Coles and Woolworths started and supported this $1 per litre price war and now they're trying to pose as farmers' saviour from something that they created," he says.