Jenny and Stuart Bland have officially won gold in their war on mastitis for the second year in a row. Here's how they did it. 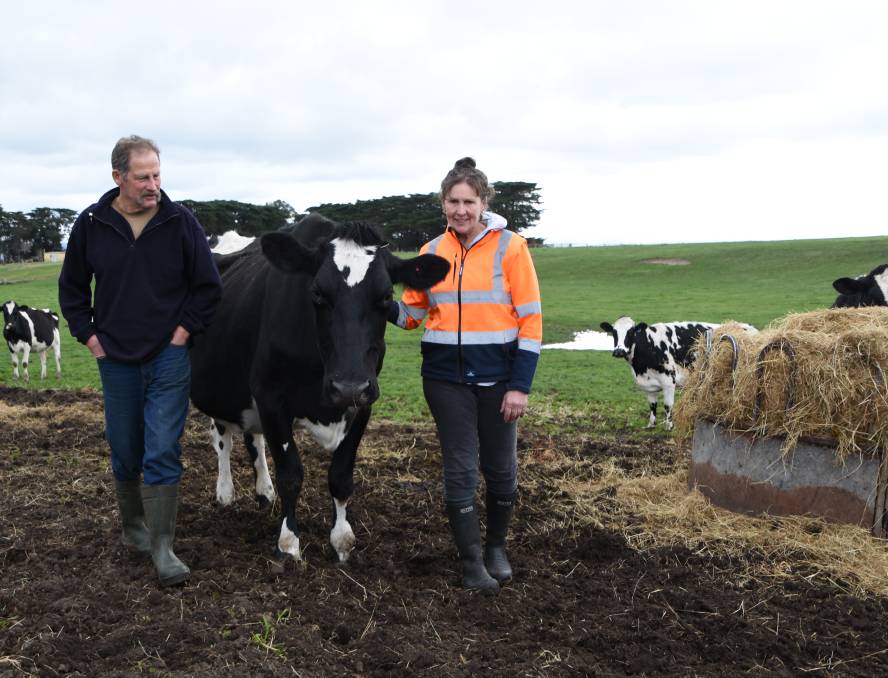 COWS FIRST: Stuart and Jenny Bland are careful cow custodians who consider mastitis and cow comfort right throughout the day and at every stage of the farming calendar, from calving through to drying off again.

When Jenny Bland was nine years old, her grandfather shook her awake and said, "Come on, your mum's had a baby girl, so you're going to have to milk.".

By the time she was 16, Ms Bland found herself in the dairy before and after school every night.

She knows her cows and, while husband Stuart is no slouch in the dairy himself, the couple nominates Ms Bland as the "cow person" of the two.

It is the second year in a row that the Blands have won Dairy Australia's gold milk quality award, which goes to farms in the top 100 for bulk milk cell count results.

The Blands milk 150 seasonally-calving Friesians at Alberton in Gippsland and the front gate is peppered with golden Kookaburras, diamonds and a plaque proclaiming the farm as a 'Burra Gold Supplier'.

They seem pleased to be recognised for their flawless quality record but pride is certainly not the driving force.

In fact, neither of the Blands can say exactly what the awards represent.

"It's something to do with milk quality," Mr Bland offered.

The tight-knit pair have been milking cows together for 36 years and quality is woven into their daily routines as well as their big decisions.

"The text from Burra comes through at 3pm," Ms Bland said, "and the first thing I look at is components, then the cell count."

While that day's spike was traced back to a couple of freshly-calved cows, the next step is to check the inline filters and the cows themselves.

"If I see a cow that's a bit fidgety or looks or feels a little bit different, I'm onto it straight away," Ms Bland said.

When a suspect cow is identified, the pair use the detergent test to confirm an infection.

"Most respond to antibiotics fairly well, so if there's no response in 24 to 48 hours, I change to another drug," Ms Bland said.

The milk from antibiotic-treated cows is discarded rather than fed to calves in a bid to avoid resistance.

"The calves don't go for milk like that in the paddocks, either," Ms Bland said.

Any cow, with the odd exception for pets, that does not respond to treatment or has more than one infection in a season is sold.

"If she responds, her card is marked if she gets mastitis again down the track," Mr Bland said.

Perhaps even more important than treatment is preventative care.

Cow husbandry is vital, too.

"They know I'm the boss cow.

"We have poly pipe in the dairy but never to hit them with, only as an arm extender for me."

Sheltered paddocks are chosen in hot or cold conditions and fresh heifers given a gentle introduction to the milking routine.

"I make a point of handling heifers when they come in and massage them with the minty cream," Ms Bland said.

"If you treat them well, they'll treat you well.

"I tell that to anyone who spends time here, whether it's vet students, or relief milkers."

If the cows come in dirty, they're washed and then dried with an iodine-soaked cloth and Ms Bland describes herself as the "phantom trail trimmer".

Although the Blands do not teat-seal, they blanket treat the herd with a 35-day dry-cow antibiotic.

When they calve, cows are kept in a transition paddock for five days so they can be carefully assessed and eased into the milker diet.

The diet includes a special mix of apple cider, vinegar, garlic and diluted molasses, which Mr Bland described as being like a "natural drench".

Despite the potion's less than alluring smell, the Blands say the cows "go crazy for it.".

"If there's a gap in the cows in the dairy, I can pretty much name who's out at the back of the yard rolling the drum around," Mr Bland said.