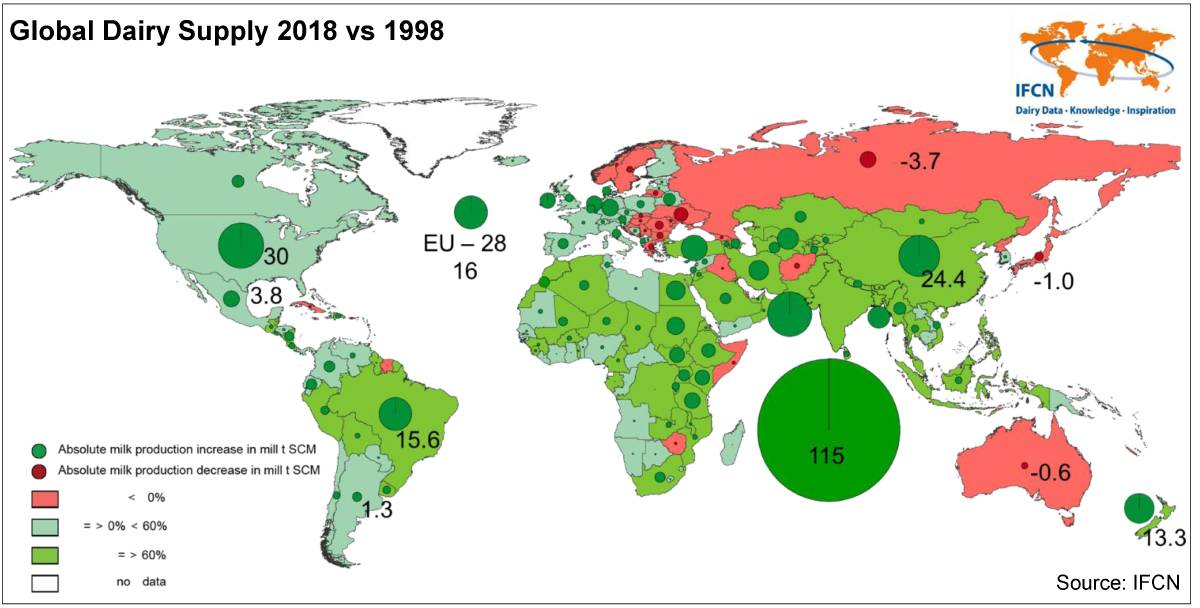 CHANGING PRODUCTION: The change in dairy production by different countries in the past 20 years. Source: International Farm Comparison Network.

Australia's milk production fell below 9 billion litres for the first time in more than 20 years in season 2018-19.

Australia's milk production fell below 9 billion litres for the first time in more than 20 years in season 2018-19.

But the 5.7 per cent fall was not as much as had been expected, after Dairy Australia released revised data for northern Victoria and southern NSW for the whole season.

The fall to a 22-year low paints a concerning picture for the Australian industry - and particularly its place as a major dairy exporter.

It comes at a time when international trade in milk and dairy products has doubled.

An International Farm Comparison Network report released in June showed international trade in milk and dairy products doubled between 1998 and 2018.

The IFCN estimated dairy products equal to 57 million tonnes of milk equivalent were traded in 2018 - excluding trade within the European Union.

Rising dairy demand, particularly in regions, such as Asia, Africa and Latin America, not producing enough milk to meet demand in their markets, had driven the increase in trade.

The IFCN estimated dairy trade would almost double again by 2040, up to 108 million tonnes milk equivalents.

The report said global milk production and consumption increased by 63pc in the past 20 years.

Australia was one of only a handful of regions in the world where dairy production shrank.

It estimates a drop of between 3pc and 5pc to 8.3 to 8.5 billion litres, due to continued high input costs and the reduced size of the national herd.

It recorded the biggest fall in production in 2018-19 at 10.2pc, almost double the national average.

Twenty years ago it was Australia's third largest milk production state with an 8.1pc share.

Conversely, Tasmania's share of the national production has grown.

Twenty years ago it was Australia's second smallest milk production state with a share of 5.8pc of national production.

Victoria - a tale of different regions

Northern Victoria was hard hit by high water and feed prices and 2018/19 production there fell 12.3pc.

Eastern Victoria was also impacted by poor seasonal conditions in many parts and production was down 5.8pc.

But Western Victoria recorded only a 2.5pc decline in production, further cementing its position as Victoria's major milk production region.

A breakdown of NSW figures reveals a trend of milk moving inland.

Overall production in the state fell 5.4pc, allowing it to hold its place as Australia's second largest milk producer with a 12.3pc share of national production.

Milk production grew 1.9pc in the inland/central region of NSW, taking its share of the state's production to 23.6pc.