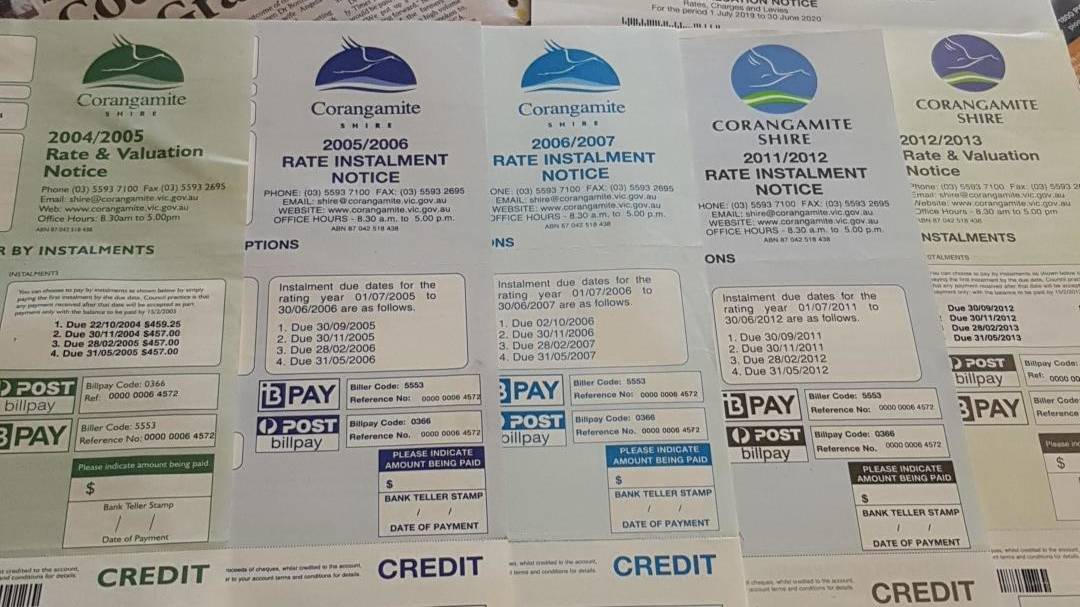 RATE SHOCK: One farmer's rates notices over the years.

Corangamite farmers in south-western Victoria have copped higher than expected rates bills as demand for grazing and cropping land skyrockets, forcing up valuations.

Farmers have copped higher than expected rates bills as demand for grazing and cropping land in the Corangamite region in south-west Victoia skyrockets, forcing up valuations.

Rural ratepayers across the Corangamite Shire have felt the sting of revaluations following last year's steep land price increases in the shire's north.

Carpendeit, Vic, dairy farmer Donna Edge was shocked when she received her property valuation for her almost 80-hectare property, which she said was $300,000 more than the agent appraisal and bank valuation.

"Mine is ridiculous, they've got my property valued at hundreds of thousands more than what the bank has it valued at," Ms Edge said.

"I don't know where they got the valuation from, the average farm around here is selling for between $4000-$5000 an acre, nowhere near $6000 which is what they've valued mine.

"As everything increases like power and fuel, it just means there's not as much to go around."

Owen and Carlie Barry milk up to 600 cows over 500 hectares over two farms at Carpendeit and Weerite, Vic.

They have three children under 3.5-years-old and purchased their Carpendeit farm in January this year after leasing a farm in Tandarook.

Mrs Barry said their rates were too high for the value they got back.

"We only bought the Carpendeit farm in January so we know what the farm is worth, and our rates are too high for the value we get back," she said.

"We also have a couple of houses in town, including one in Camperdown, and that has been valued on rates $100,000 more than what it's worth.

"We paid market rates for the farm and an independent person from the bank valued it.

"So what is their valuer doing?"

Mrs Barry said the farm was their core business and every price rise hits hard.

"We've only got a little dairy, a little house and not much shedding," she said.

"We don't have any services out here, we're not paying for sewage and we don't have waste collection, we pay for our own rubbish removal.

"You do wonder what you get for your rates.

"Even a couple of thousand makes a massive difference."

Mr Mugavin said there had been a "significant" increase in demand for land in the Corangamite Shire.

"The past 12 to 18 months has seen significant increase in demand for grazing and in particular cropping land in the Corangamite Shire," he said.

"The increase in demand for land in this area and limited supply has resulted in a heated market and rapidly increased price movement."

He said increases came as no surprise.

"If the agent appraisal and bank valuation occurred 18-24 months ago, it isn't a surprise to see that the Capital Improved Value, as at the relevant date of the council's assessment, has increased," he said.

"Council valuers cannot ignore the current sales evidence, which at present is heated, and in cases, record prices being set for land values."

"Local government expenses and commitments to the safety and service of their communities has far outgrown their ability to raise revenue without imposing severe penalties on business and property owners," he said.

"The whole service responsibility of councils, their revenue streams and the abrogation of responsibility on the part of state governments needs a full root and branch review, even a Royal Commission."

Corangamite Shire mayor Neil Trotter said the market was more "volatile than ever".

"A lot of land sales in the area have caused spikes in rates in other areas," he said.

"It only takes one or two land sales and some properties have almost doubled in price.

"Because we now have annual revaluations it's much more volatile.

"It only takes a small number of sales to cause a peak in valuation of properties in the area, so the rates rise accordingly."

Mr Trotter said the current rating strategy was under review by the state government.

"Valuations are completely out of our hands, it's all done by the state government," he said.

"We put a submission that we weren't in favour of the annual valuations, we thought it should have stayed every two years at least.

"The longer it is, it takes the volatility out and it means you don't get those sudden movements.

"We want changes to happen incrementally so that the burden doesn't fall on ratepayers."

These valuations are based on sales activity leading up to and close to this relevant date.

"An independent review is currently underway, the community is encouraged to have their say during the review through the engage.vic website," she said.

This story originally appeared on The Standard