THE incredible impact Lyndon and Joyce Cleggett, Brookleigh, Glencoe, SA, have had on the Guernsey industry was recognised at this year's Guernsey feature breed showing at the Royal Adelaide Show. 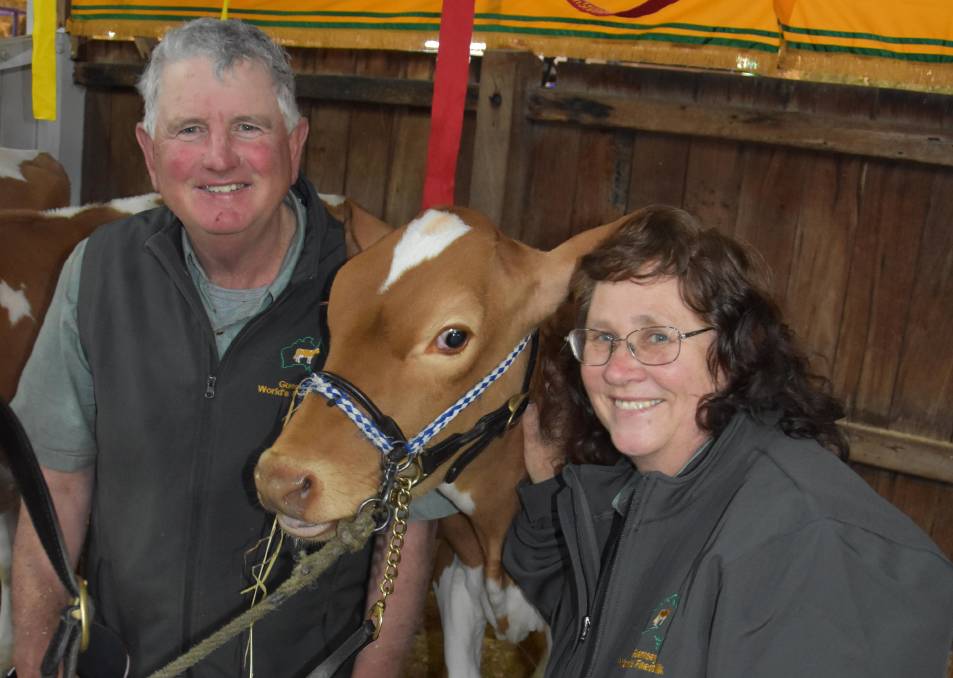 THE incredible impact Lyndon and Joyce Cleggett, Brookleigh, Glencoe, South Australia, have had on the Guernsey industry was recognised at this year's Guernsey feature breed showing at the Royal Adelaide Show.

Following on from the judging - where they won supreme Guernsey exhibit - the Cleggetts were awarded with the inaugural Masterbreeder award for the breed.

The award is presented based on the classifications of the cows registered.

Mr Cleggett said it was exciting to be the first Australian to receive the award in the breed and, while he knew it was coming, was shocked to have it presented on that day, by Dairy Livestock Services's Brian Leslie.

At the same presentation, both Mr and Mrs Cleggett were also awarded life membership to the Guernsey Cattle Society of Australia.

Mr Leslie said the Cleggetts, who have been showing for 54 years, won their first Royal Adelaide Show senior champion in 1972 and had 29 champions since, as well as many wins at the Royal Melbourne Show and International Dairy Week.

"I don't think anyone is more deserving," he said.

"There is no bigger promoter of the Guernsey breed than these two people. They're an inspiration to anybody in the Guernsey industry."

Mr Cleggett said the life membership announcement "blew (him) away".

Both Mr and Mrs Cleggett have been active in the Guernsey industry, and dairy industry at large, for a number of decades, with Mr Cleggett spending 20 years on the SA Dairyfarmers' Association board, and is chair of the SA Cattle Advisory Group, as well as serving on the Australian Dairy Herd Improvement Scheme and four years as federal Guernsey Cattle Society of Australia president.

Mrs Cleggett has served as federal society secretary since 2006.

Also on exhibition at the Guernsey feature showing were a rare sighting of triplet heifers, born on January 28 to Brookleigh Aero and sired by Brookleigh Hello Aussie.

Mr Cleggett, who bred the heifers, said this was the first time he had seen triplets born to a dairy cow.

While something of a novelty for the interested public, he said they were also heifers good enough to compete at the show.

He said the trio had been DNA tested, and shown to have the same DNA, making it hard to split them.

"(Judge Dale Chupp) found more difference in them than I do," he said.