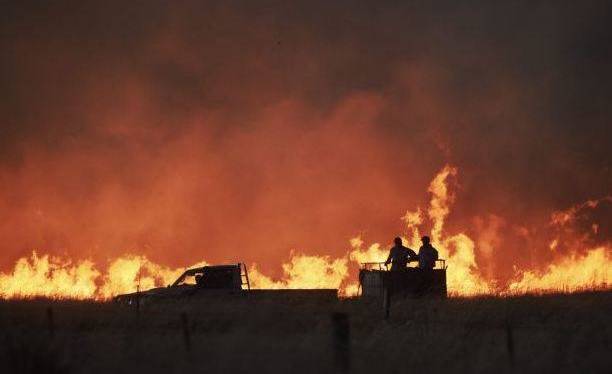 THE DAMAGE: Producers are adding up huge losses on livestock properties from bushfires. Photo: Nick Moir

Early estimates have stock losses in Victoria at 13,000.

EARLY estimates of stock losses from bushfires in Victoria indicate more than 13,000 head of beef and dairy cattle and sheep have been killed or euthanised.

Vast swathes of improved pastures have been burnt out, along with hundreds of thousands of dollars worth of machinery, sheds and even homesteads.

Victorian yearly milk production will take a big hit, with dairy industry leaders saying the trauma will affect milking cows for the remainder of their lactation.

Agriculture Victoria has not yet released official stock loss estimates.

It currently has 19 field teams conducting initial property assessments and addressing immediate animal welfare needs in areas of the fire grounds where it has been deemed safe to access.

However, farmers groups have put forward the initial estimate and say the figure is likely to grow.

Agriculture Victoria has conducted assessments on more than 230 property cases since Tuesday afternoon, including about 165 properties affected by the East Gippsland fires and 65 affected by the North East Upper Murray fire.

"While we don't have a complete understanding of the fire impacts yet due to restricted assets, we know there has been a mix of dairy, beef and sheep farms affected," state agriculture relief commander Sharyn Williams said.

"The high country had a reasonable spring and it was most affected," he said.

On the beef front, it was mostly commercial operations affected but some studs had also suffered big losses, Mr Vallance reported.

Stock agents have been working around the clock to find agistment. Significant numbers are going to West Gippsland, which has had a good season.

Mr Vallance said producer anger and frustration at regulation around firebreaks, land clearing and "the complete breakdown of the backburn system for winter" was very evident as the losses were being added up.

Most of the dairies in the fire-affected East Gippsland and north-east areas were grass-based pasture systems, with paddocks of valuable ryegrass and summer crops including sorghum, rape, millet and turnips destroyed.

United Dairyfarmers of Victoria president Paul Mumford, Gelbeado Park at Won Wron in central East Gippsland, said most dairy stock losses have been rising one and two-year-old heifers which were housed in out paddocks while milking cows were closer to homesteads.

Access to energy from generators was the initial triage point and most sheds were up and running again now, he said.

"However, some farms couldn't milk for up to two days which is very stressful for animals," he said.

Milk producers have now turned their attention to feed. Some were focused on bringing fodder in, while others were looking to get young stock out on agistment, Mr Mumford said.

The generous offers from across the state - and interstate - had been overwhelming, he said.

"Farmers love to help their fellow beings," he said.

Most processors have already declared they would be reimbursing the costs of milk that had to be tipped out due to road closures, Mr Mumford reported.

"We do, however, have have fears that given the stress dairy farmers have been under for a considerable number of years, this fire event may be final straw and we may see a further retraction of Australia's dairy industry," Mr Mumford said.