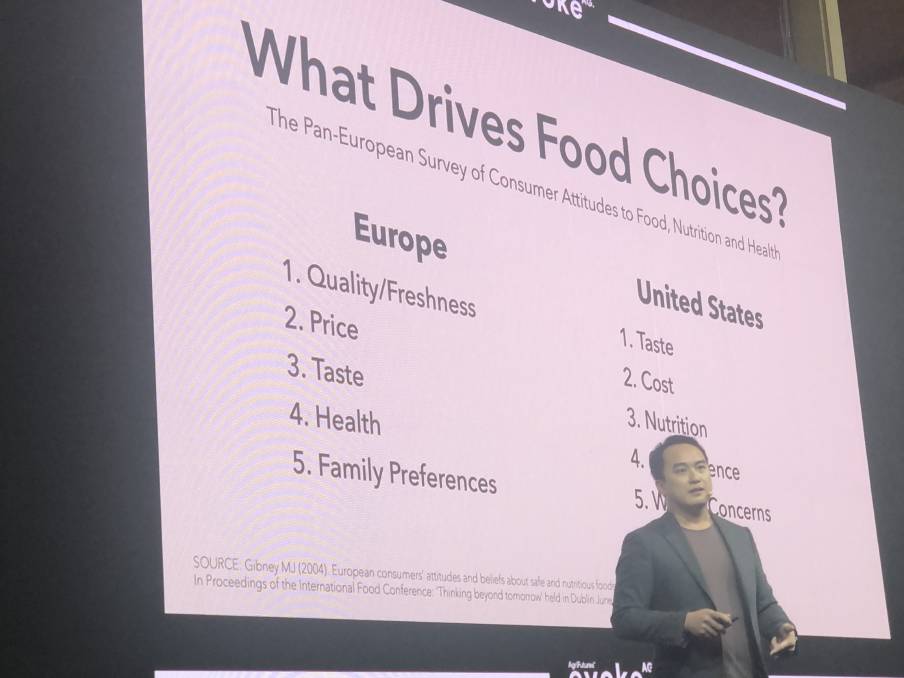 What drives food choices? EvokeAg conference questions what the food choices of the future consumer will look like.

Teenagers have ditched spending money on their wardrobe to instead invest in food.

In the Instagram age, what you eat has become tied up with identity.

In the same way that youth were once identified as a rocker or a hippy based on their pants, your choice of food is now a willful act of expression.

The New York based entrepreneur said his company aimed to help industry build a food market that was 'better' for people and the planet.

"Small upstart companies are stealing so much market share from entrenched companies," he said.

"Brands are going after smaller niches as they can point to 'food tribes' that have unique ways of looking at food."

Mr Lee said the green revolution of the 1950's was extremely successful in producing significantly more food for the burgeoning population, preventing mass starvation across the globe, however the cost was a consolidation of biodiversity.

"Seventy five per cent of the worlds food comes from just 12 plants and five animal species," he said.

"We exchanged the natural biodiversity of all the natural flora and fauna in exchange for a highly concentrated system."

While this statement is questionable, if not incorrect for many countries outside the 'fertile crescent', given the increased access and adaption to novel crops and animals across countries such as Australia, Mr Lee's point seemed to be that a predominance of major crops and animals represented in supermarket shelves was part of a 'nefarious' plan, as opposed to an outcome of the inherent biological adaptability of these species to farming.

"There was an implied sense there was one way to do agriculture, and if you weren't doing it that way you were radical, or an outsider," he said.

Mr Lee said for the first time, teens were spending more on food than clothing, indicating that teenagers were using food as a primary method to express themselves.

"It's not just about the calories going into your body and how they make you feel, its about the identity you want to project to the world," he said.

"The idea of food as identity is massively disruptive to the big food system, the consolidated food system.

"Our consolidated system has not been able to look at you as an individual."

Though this is changing, Mr Lee gave examples to the audience around online stores segmenting product by values such as ethical employment, environmental sustainability and cruelty free.

"There is an online grocer where you can filter the website by a set of values," he said.

"Everything that doesn't fit your values falls away, you only see the things that reinforce your values."

Mr Lee said while the population was increasing and there was a need to feed them, it was foolish to think there was only one way to do so.

"This is the end of one-size-fits-all food, we still have a consolidated supply chain and production system, but the consumer is trying to get to the point where they are spoken to as individuals," he said.

Food for the future

Mr Lee said a significant number of food tribes were focused on eating for the prevention or mitigation of health concerns ranging from cancer and auto-immune diseases, through to ketogenic and vegetarian.

"The idea of food as medicine is coming, as people become jaded with the pharmaceutical industry," he said.

However, Mr Lee said along with health, the other major food macro-trends were sustainable foods and food tied to an experience.

"Experience is everything from how the food tastes, to how you discover the food and the places you are eating it," he said.

"On the surface people are willing to pay more for sustainable foods.

"But when you ask people from Europe and America what drives your food decisions, the things that come up are obvious - quality, freshness, price, flavour."

Mr Lee said while people may care about climate change broadly, in the moment when shopping they are often emotional and illogical.

"Despite our best intentions it is often hard to support the sustainable choices, because we are human beings and are driven by hunger and flavour and price and nutrition," he said.

"How do we transition to saying this food is delicious because it is sustainable?"

Mr Lee said there was a need to link sustainability and regenerative agriculture to 'selfish' consumer needs such as flavour, price and nutrition.

"Climate stuff is real and its important, but people don't eat statistics, they eat food, and we have to marry the two very strongly," he said.