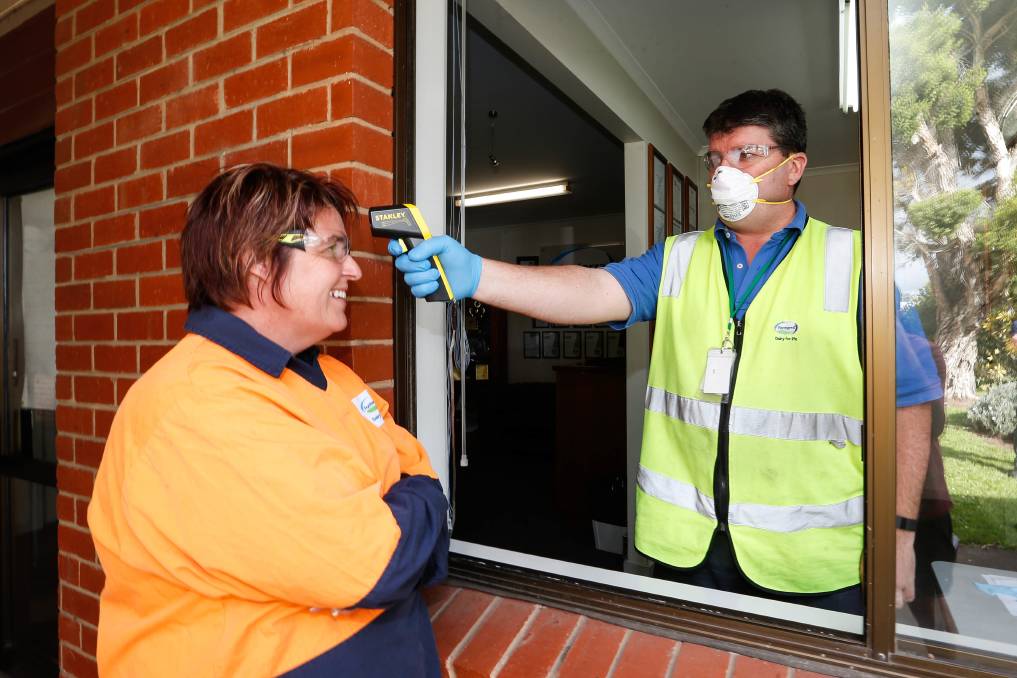 That's what Fonterra's Cobden, Vic, milk plant has asked of its 300 workers as it keeps the coronavirus at bay while producing a chunk of the nation's dairy needs.

For the factory's Adam Cust, an employee of 36 years, the virus has been a "game changer" where four teams of staff never physically interact during the factory's 24-seven production.

"Instead of having a chin wag at changeover, it's all done by shift changeover notes and white board communications," Mr Cust said.

"You do miss the gatherings at lunchtime." But Mr Cust said teamwork still shone through because as essential workers they were well aware of the health concerns and that other sections of the economy were at a standstill.

"Our products are an essential part of life and we do show pride and we are well aware of the circumstances if we don't get it right," he said.

"There's a great team at Cobden, everybody has pulled together."

"Our people have been very flexible, because we have tried to make sure our shift rosters create an environment where they don't interact with each other and we've optimised those lines of segregation."

But he said on the other hand demand for Fonterra's foodservice products had retracted, as fewer people ate out from restaurants and some shuttered.

"People are still eating dairy they are just eating it at home," Mr Brown said. Fonterra's Cobden factory has brought in sweeping changes to protect the health of staff, farmers and the public.

"This resulted in an increase in production during the first few weeks. Sales in retail outlets have since started to show signs of moderating," Ms Omstedt said.

She said the full impact of the virus on the dairy industry would "take time to materialise" but the key driver of the impact in south-west Victoria would be what happens on the global market.

"There are significant downside risks to commodity prices for the next season which have intensified following the outbreak," Ms Omstedt said.

"Longer term, the deterioration in the economic outlook is expected to dampen the growth rates of global demand for dairy."

But she said the Australian market was well positioned, with early signs of confidence as milk production increased 3.9 per cent in south-west Victoria in February compared to the same month last year. However, production was still down 5.3 per cent year-to-date in the region.

"Australia is approaching its seasonal low production period and coming off a period of decreasing production and heightened processor competition for milk," Ms Omstedt said.

"Therefore, there is sufficient processor demand to absorb any additional milk production from within Australia."

The story Factory stays ahead of virus first appeared on The Standard.