STAR POWER: At his height, Barnaby Joyce was the political superstar that Nats had never had. It's worth noting former PM Malcolm Turnbull was also present at this event at Tamworth in 2017, but it was Joyce who got the attention. Photo: Gareth Gardner

Marking 100 years of the Nationals: In part 2 of this special report, we look at the how the modern Nats differ from their Country Party ancestors.

AS the party celebrates its 100th anniversary, political pundits have noticed the Nationals are in the midst of an identity crisis.

For decades, the party was the stable partner of the Coalition and epitomised the traditional values of regional Australia - your word is your bond and you look a man in the eye when you shake his hand.

The National Party has always prided itself as a regional political power. But the party's make up seems to be increasingly political and less regional with each scandal and public spat.

Over the past few years, scandals and infighting have dominated the party's headlines, from the infamous 'bonking ban', to recently leaked text messages, in which Nationals NSW leader John Barilaro told federal leader Michael McCormack "you will never be acknowledged by me as our leader".

Over the course of a century, the party has only rolled one leader - when Charles Blunt organised a coup against Ian Sinclair in 1989. That statistic looks incredible when you put it alongside the Liberal or Labor parties.

However, these days it feels as though the party is constantly on the verge of a leadership spill, with Michael McCormack's opponents circling like sharks, just waiting for an opportunity to strike.

On the first parliamentary sitting day of 2020 - a day dedicated to the victims of the Black Summer bushfires - former leader Barnaby Joyce tried to roll McCormack. The bid failed, but reinforced to the public there was a deep divide within the party - something that's an anomaly within the Nationals' 100-year history.

So what path has led the current generation of Nationals to this identity crisis?

Marking 100 Years of the Nationals:Part 1 - A history of the party's larger-than-life role in politics

Veteran political reporter and Rusted Off author, Gabrielle Chan has investigated this question in depth and said Joyce's political arrival marked the beginning of a new dawn in the party.

"I refer to them as pre-Barnaby and post-Barnaby, because I think that he's the personality that really changed the way the party operates," Chan said.

"The Nats don't have leadership spills. They waited in line, in an orderly queue, and it was impolite and non-gentlemanly to do any other thing. And then it all changed with Barnaby."

At the height of his power, Joyce was a political star drawing exceptional media and public attention to himself and the party. He was able to dominate headlines, connect directly with voters and almost single-handedly push through agendas.

He secured the $10-billion Inland Rail after decades of unsuccessful lobbying and relocated the APVMA from Canberra to Armidale in the face of overwhelming opposition, even admitting he was the only one in Cabinet that supported it.

When Joyce first entered politics as a Queensland senator, he crossed the floor to vote against his party an unheard of 28 times. TOUGH GIG: Nationals leader Michael McCormack has consistently had to fend off questions about his leadership security from both the public and the party. Photo: Sitthixay Ditthavong

Joyce's vociferous style of politics often rubbed enemies and allies alike the wrong way. But it didn't matter, because for most of his career he got results.

"He has an incredible capacity to distill issues - overly simplified in my view - down to what people want to hear," Chan said.

"He's created this kind of new politics in that party and done it with some success."

Over the years, other Nationals have put their own spin on Joyce's style - Matt Canavan, George Christensen, David Gillespie and John Barilaro have all emulated him in some way.

"Do we want to go back to that old party, where it was all on handshakes? Or do we want to be a rolling mess of a party that gets more publicity, and people see that they might not win every argument, but they're actually standing up for us?"

For so long, the Nationals by and large avoided internal politics and party machinations and left the politics of politics to the Liberal and Labor parties. Now, it's almost as if they're playing catch-up, Australian National University political science emeritus professor John Warhurst said.

"There's a much higher level of internal disruption and leadership contention. It looks all very self interested, neglecting voters for their own personal advancement," Professor Warhurst said.

But to lay the blame squarely on Joyce is unfair and only part of the story. Although the identity crisis is in full bloom, its seeds were sown long ago, when Blunt wrestled control of the party off Sinclair in '89, to bring it into closer alignment with the Liberal Party.

Since then, there has been a growing sentiment, both within the party and in the regions, that the Nationals have become "Liberal lap dogs". There was once a time where the Country Party successfully demanded the resignation of a Prime Minister in exchange for a coalition agreement. Now the party's critics label the Nationals "akubra wearing Liberals".

"I think the feeling was that for a while there, the Nationals almost lost their separate identity," Prof Warhurst said.

"You can see how the identity crisis feeds into Barnaby, because he's sort of a rough diamond who represents rural values. He advocates for sticking it up the Liberals, to be a separate party."

In an attempt to re-establish their political identity and independence, the Nationals have favoured quick hits of political dopamine over deep policy. 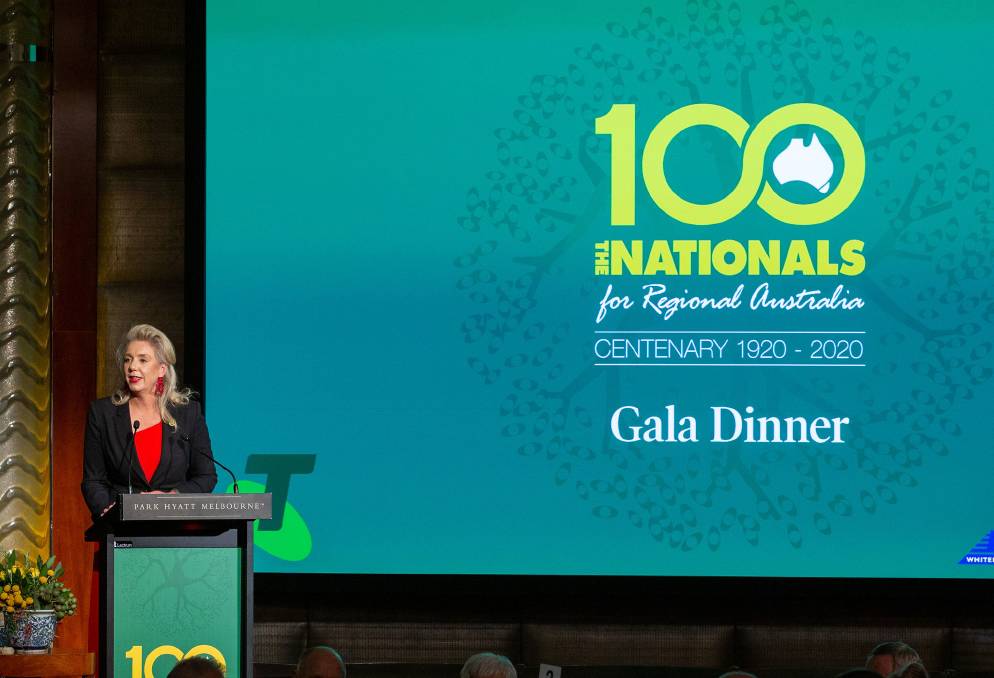 "They'll always go for roads, bridges, dams," Chan said, things you can physically point to and say, 'look at what we did'.

The party lacks overall policies on water, drought and food processing, issues at the core of regional Australia.

"There are deep foundational issues facing country communities and it's not going to be solved by the 'latte-sipping' divided and rule rhetoric, or by chucking out a few bridges and roads before an election," Chan said.

"These are urgent issues that rural communities are facing and if they are serious about representing rural Australia, they need to show us some policies."

Despite the party's recent troubles, there has been little to no change in its vote at a national level. However, Chan said the restlessness of rural voters was "misunderstood as something that happens in a linear fashion."

Rural voters often lack viable alternatives. Labor gave up on National strongholds long ago and the Coalition agreement sees the Liberals step out of the way.

"At the last election in my seat of Riverina, Michael McCormack's seat, I talked to farmers who were cranky with the National performance, but I basically said, 'who else am I going to vote for? I'd rather have my eyeballs pulled out than vote for the Greens or Labor'," Chan said.

"The culture of not voting for either Labor or the Greens is so strong and cannot be underestimated. But that's what makes it interesting when a high-profile independent comes into the field."

Recent history has shown that when a culturally viable alternative appears, traditional National voters are not afraid to break away, Prof Warhurst said, pointing to One Nation and the Shooters, Fishers and Farmers Party (SFF) in NSW.

When SFF politician Philip Donato won the NSW seat of Orange at the 2015 by-election, he ended a Nationals reign of almost 70 years. Many dismissed the victory as a flash in the pan.

But at the 2019 election, Donato won the seat again, while his SFF colleagues in the neighbouring electorates of Murray and Barwon seized two other former Nationals safe seats.

"The rise of those small parties and independents feeds on the feeling of being left behind, that the Nationals are a bit too comfy and taking it for granted," Prof Warhurst said.

"I think the new generation of rural voters is probably not as deeply attached. It's not in their genes quite the same way and that's a danger to the Nationals.

"But I will say this, 30 to 40 years ago, there was a saying that the Nationals would fade away due to social change...and electoral reform creating fewer and fewer country seats. So they have to be given credit for the fact that they're still here. They've got a lot of problems, but they are still in there fighting."

Coming this evening at 6pm: Part 3 of this special report on 100 years of the Nationals.