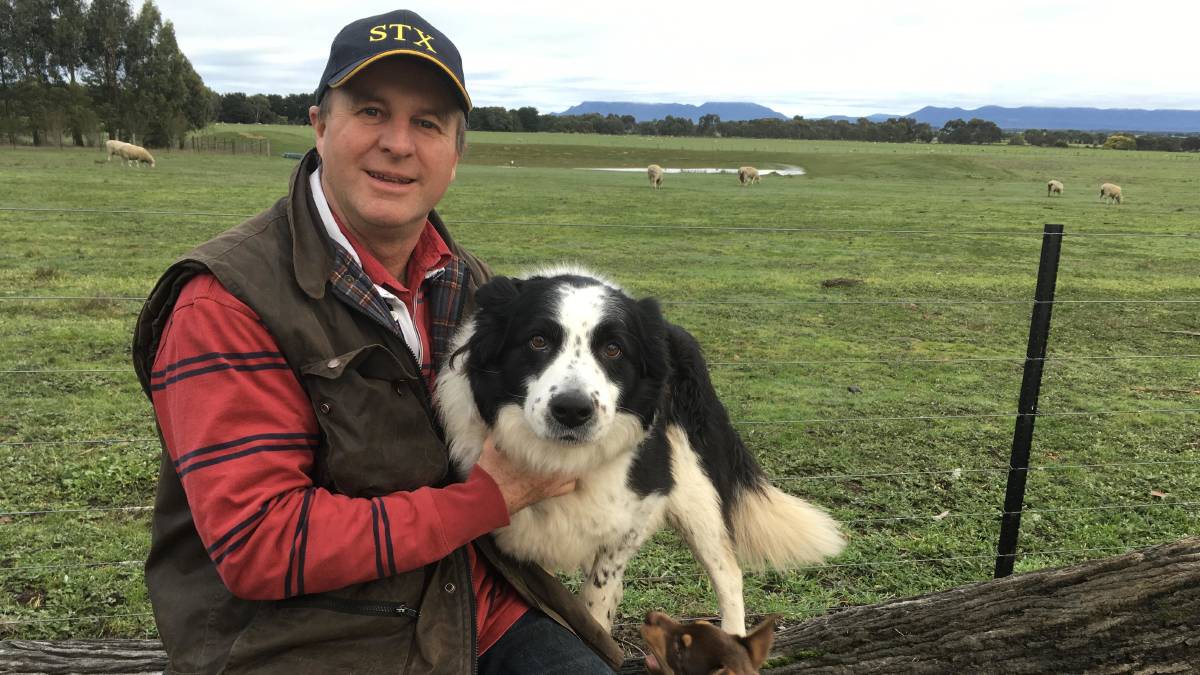 Glenthompson, Vic, prime lamb producer Russell Mitchell, with Border Collie Hammy, made the switch from wool to meat over a decade ago after being disillusioned by how the Merino industry was run.

Some wool growers may be considering a move out of the industry but those that have already made the move say there is a lot to think about.

As the wool industry battles through hurdle after hurdle, some wool growers may be considering a move out of the industry, but those that have already made the move say there is a lot to think about before making any big decisions.

Russell Mitchell, Glenthompson, Vic, made the switch from wool to prime lamb over a decade ago after he lost his faith in the productivity and profitability of Merinos.

"We always had some fist-cross ewes and we decided to simplify that and go into a composite-type animal," Mr Mitchell said.

"We thought we'd split our risk and have a self-replacing prime lamb enterprise run alongside a Merino wool growing enterprise, but we eventually transitioned completely out of Merinos."

He said while that wasn't the initial plan, after collecting their own data and seeing that the composites averaged an additional $210 a hectare more in returns than the Merinos, the decision was obvious.

"And we don't have Merinos to compare that data with now but I'd imagine that would be substantially higher again," he said.

But Mr Mitchell admitted he didn't take the decision to leave the Merino industry - an industry his family had been in for five generations - lightly, but he just felt "disillusioned" by the wool industry.

"We just started to realise there was a stronger future in the meat side of things," he said.

"There's more stability in the lamb side of things; you're not just reliant on one market like in wool where 80 per cent of it goes to China."

He said what worked for his operation may not work for others and he encouraged anyone considering a move out of wool to do their research properly.

"You need to collect real evidence and not just hearsay at the pub," he said.

"And you've got to know where you are and figure out whether you're happy doing what you're doing."

But he said staying put and not assessing your options could be your biggest regret.

"If I hadn't made the change, I wouldn't have known the opportunity I'd missed out on," he said.

"I would probably be disappointed but I'd have just soldiered on."

Mr Mitchell was really proud of how things had turned out and excited about the future of his industry.

"The wool industry has a history of being up and down, and in the time we've been in the lamb industry, our returns have kept growing and growing," he said.

"I know that's not going to happen forever, but in the last seven years, the price per head of our lambs has doubled, whereas if we were in wool, that certainly wouldn't have happened."

Charlie de Fegley, Ararat, Vic, made a similar move in 2006 after realising his pasture base wasn't suited to Merinos.

"In the mid '80s, we went through a big pasture renovation program and developed some really productive pastures," Mr de Fegley said.

"We developed a feed base system that wasn't suited to the Merino; they got sore feet and didn't really handle the highly luscious pastures."

He also introduced high fertility into their genetics and ended up getting very poor lamb survival.

"We felt we were being crucified for having the wrong type of animal," he said.

They already had a meat side to the business but realised that was the type of sheep that was suited to their high rainfall property.

"You can't run a Ferrari on standard fuel," he said.

Mr de Fegley said at the time, he was less than impressed with the way the wool industry was being run.

"And if you're in a system where you've only got one client then you're in trouble," he said.

But he said anyone thinking of making a move to prime lamb really had to consider whether that suited their property.

"In all honesty, if you haven't got the right feed base to swap from Merinos to maternal meat genetics, you could be awfully disappointed," he said.

"A lot of producers are better off doing what they do best because otherwise they won't do it properly."

He said the forgotten issue was the feed base.

"At the moment people have been saying to me 'I bet you're glad you got out of the wool industry', but the meat industry could struggle going forward too," he said.

"I hate it when people compare commodities just based on price; you've got to do what suits you best."