Stuart Crosthwaite, Hermitage Dairy, NE Victoria: 'A lot of people think you are born a leader, but I have learned leadership can be taught.'

Like dairy farming, leadership is not something Stuart Crosthwaite considered his calling, until looking through the lens of adulthood.

The shy kid from Kergunyah South in north-east Victoria's Kiewa Valley who "never put up his hand in class" finished Year 12 with "no intention" of becoming a fifth-generation farmer.

It's a far cry from the trajectory Stuart imagined when he left home for the University of Melbourne with his sights on engineering.

Struggling in physics, he switched to agricultural science, which led to a post-graduate Diploma in Science at Massey University in New Zealand.

On his return to Australia, Stuart worked as a fi eld offi cer for Murray Goulburn in western Victoria where he says he saw the "best" and "worst" examples of farming.

Immersing himself in investment analyses of dairy businesses while studying in New Zealand, and then seeing the varying capabilities of farmers as a field officer, Stuart thought a lot about the bleak view of the industry he harboured as a youngster.

"It unearthed [for me] the potential of dairy farming."

He returned home in his mid-twenties and was "like a bull at a gate wanting to implement everything" he had learned but was frustrated by his inability to "influence the spend" on the farm.

"Being the next generation wanting to come through, I think I am like many others who've experienced family tensions when succession planning issues arise," Stuart said.

While he acknowledged there was no capital for big projects, Stuart wanted to improve existing infrastructure and build the farm's future instead of "just ticking along doing average Victorian production".

"I had all these great ideas - and suddenly, I hit a brick wall. 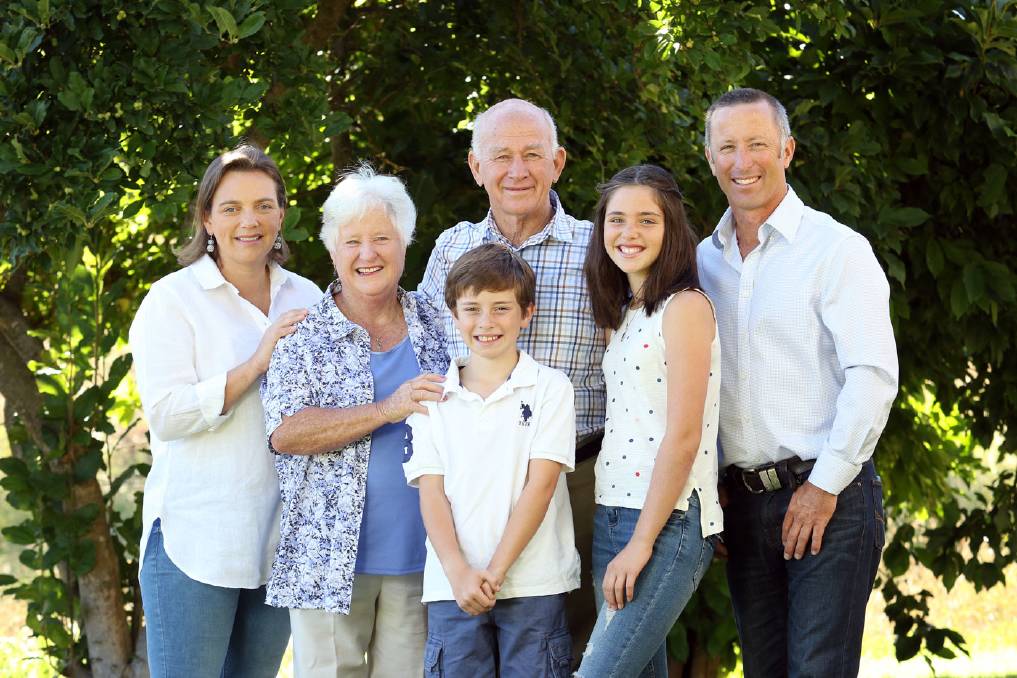 Stuart decided he couldn't "wait for another five or 10 years and kiss goodbye a career in consulting", so he left the farm with wife Sarah for a job at Bega Cheese.

"Disappointed in each other", a tense year passed before meeting with his parents.

But the conversation turned out to be frank and fruitful.

A basic lease arrangement was negotiated, and Stuart and Sarah moved back to the farm where they are now raising their children Indi, 14, and Otto, 12.

After five years the farm had doubled its production but before an investment could be made in replacing the 100-year-old dairy, succession planning began in earnest.

"It [succession planning] is the Achilles heel of agriculture in Australia; they're diffi cult conversations to start within a family because nobody wants to rock the boat," Stuart said.

Now 15 years later, Stuart's parents have enjoyed extensive travel in retirement, and their successor has tripled farm production - thanks to significant investment in the dairy, irrigation and technology - and built a new home on the property.

"We milk between 450 to 500 cows and have three full-time staff; it allows us to have a roster and we schedule holidays and days off," Stuart said.

"You can manage a roster with a bit more scale [in the business], which the investment has allowed us to do.

"Dad still comes to the farm and helps out with the breeding and bits here and there; he's got the freedom to do that, but he's not tied to anything."

While paving a new direction for his farm, Stuart inevitably landed on various committees, including Alpine Valleys Dairy Incorporated, which established a successful strategy to increase the region's milk production.

"I'm proud to say the north-east has probably grown our production by 20 to 25 per cent in the past decade," Stuart said.

The co-operative, chaired by Stuart, has grown to eight members with a vision to produce its own bottled milk, while also increasing its collective negotiating strength with processors.

It currently has a three-year contract with Freedom Foods and is in negotiations with other processors.

With leadership experience and responsibilities growing on his résumé, Stuart says his natural style was a "doer", leading from the front and directing people with "black and white instructions".

But the ARLP has been transformative: Stuart - and the people around him - now benefi t from a more inclusive style of leadership, which Stuart hopes will ripple through his business and the wider dairy industry.

Learning self-awareness has also helped Stuart appreciate the need to manage his own workload and "help others carry some of the load", in turn, fostering their leadership capacity.

"My leadership style is now more of a facilitator than a footy captain," he said.

"I sat down with my staff and we developed our own core set of values.

They said, 'We want more teamwork, communication and responsibility'."

Value in sharing the load

They respect each other's role and only seek Stuart's advice when needed in their own area of management.

The team has consistent communication, each contributing to a Google sheet that is live across their phones, displaying jobs lists, rosters and other information.

They also communicate via WhatsApp and have monthly team meetings.

Stuart diarises an annual performance and salary review with each staff member and supports their participation in industry courses.

Herd manager Angela Dunstone, 32, is rapt to have more responsibility and training opportunities in her field of interest.

"Each of us knows what jobs we have to do. If anyone has a question about the cows or animal health, they come to me. It gives me a sense of ownership in that area and if I need advice, I can ask Stuart," Angela said.

"This makes me feel valuable to his business; I'm not just a number or just an employee; I matter."

Feeling valued and able to learn from Stuart in a collaborative team environment has also been pivotal to Angela staying in the dairy industry, after a negative experience with her previous employer.

Angela did not grow up on a farm, and when she switched from nursing to her first farm job, it was an unhappy experience because she was "thrown in the deep end and not taught anything".

But under Stuart's mentorship, Angela is excited about having a long, rewarding career in the dairy industry.

"I value that my staff can see opportunities for improvements and I really want them to have input into that," Stuart said.

Stuart is grateful for Gardiner Dairy Foundation's sponsorship of his current participation in the ALRP, which includes immersive experiences in the remote Kimberley region, regional Australia, Perth, Canberra and Vietnam.

The iconic program takes more than 30 remote, rural and regional leaders from diverse industries throughout Australia to develop their capabilities.

While currently interrupted by COVID-19 restrictions, the experiential learning program so far has had a profound impact on Stuart.

"A lot of people think you are born a leader, but I have learned leadership can be taught," he said. "I've learned to be more aware of the people around me and more aware of myself and my impact on them."

Stuart said the program had shown the value in networking to achieve positive outcomes and was teaching him the "three A's of leadership - awareness, adaptability and authenticity".

With increased self-awareness and perspective on other people's values, Stuart feels better equipped to motivate and nurture his dairy industry peers.

"You learn from everyone in the ARLP cohort. It's a really supportive atmosphere," he said.

"I've learnt it's okay to be a little bit vulnerable and admit you are wrong and ask for advice."

With his farm "humming along and co-ordinating itself", Stuart's new leadership style has allowed him to be "more present" with family and friends, while also sharing his passion for the industry.

He believes the ripple effect of role-modelling and influencing more leadership within all tiers of farm life is an enduring return on investment.

"Change takes time and you need to build a snowball and have someone to keep pushing it, otherwise it will lose momentum and die.

"There needs to be a really long-term strategy in agriculture to push that snowball because it's about bringing the next generation in to be innovative and take things to the next level."