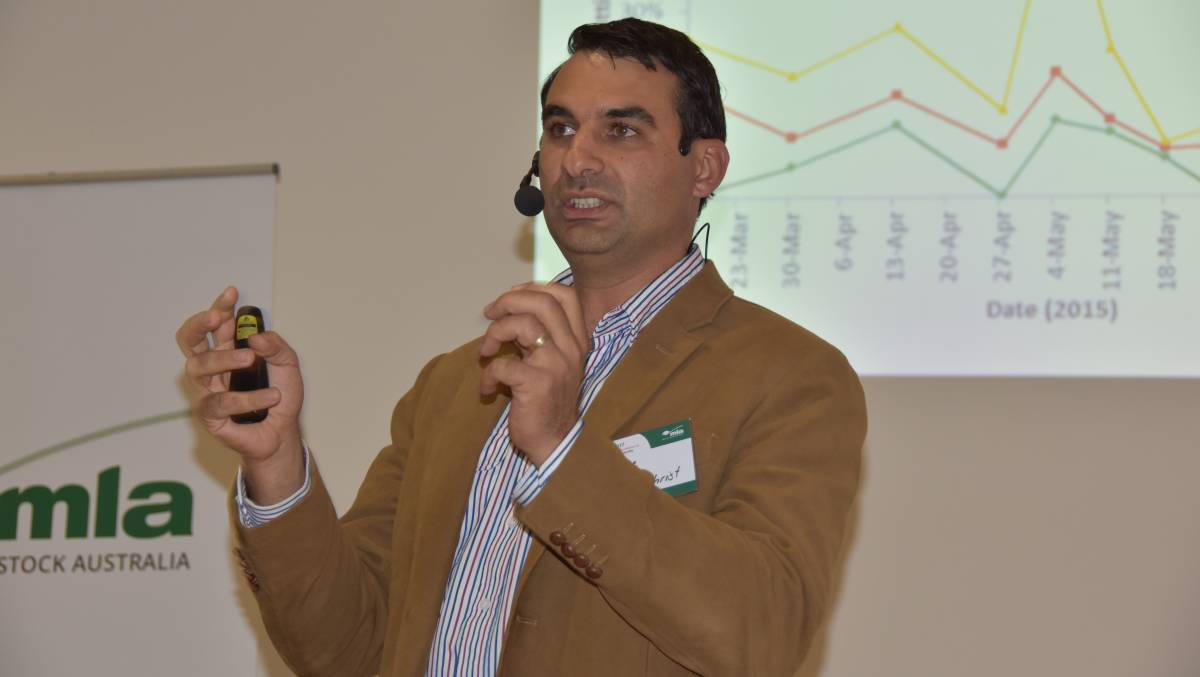 University of New England meat science lecturer Peter McGilchrist is a big believer in providing carcase feedback but said it was only valuable when there were incentives around for higher quality animals.

UNE meat science lecturer Peter McGilchrist said quality and yield used to be antagonistic to each other.

Is it possible to produce cattle and sheep that offer both high quality and high yielding carcases?

University of New England meat science lecturer Peter McGilchrist believes it is, but said these traits were historically antagonistic to each other.

"Now that we have genetic selection, we can find animals that are both high quality and high yielding," Dr McGilchrist said.

"In the sheep industry, for many years we hadn't had an ASBV (Australian Sheep Breeding Values) for intramuscular fat (IMF), we only had a fat ASBV.

"So people were selecting for increased fatness expecting to also get increased IMF," he said.

"We want to have our cake and eat it too from each carcase and that's the way we can do it."

So how did you increase your quality and yield?

"Take the fat off the outside of the meat and put it on the inside."

Dr McGilchrist is a big believer in carcase feedback and in proving so, was one of the creators of the Meat Standards Australia (MSA) index.

"Years ago, producers got all the individual carcase feedback - marbling, rib fat, carcase weight, ossification score, hump height, for example - and they had to be a scientist to work out which carcase was better than the other one," he said.

"We needed one number for each carcase to indicate quality.

"[We had to work out] how we used all of those carcase measures to predict the MSA quality of lots of different cuts and the answer was actually simply saying 'why don't we just add up the scores of all those different cuts and average them out across the carcase', and then you get your average carcase score."

He said it was now a very balanced index that weighted the importance of each cut based on the proportion of muscle compared to the weight of all other muscles.

"And we really needed that in the industry so people could evaluate whether they were going forwards or backwards with their genetic programs, nutrition programs, or their management programs," he said.

"Having that index allows you to look backwards or even use the calculator to predict if you could shift marbling from this to this, what would that do to your overall MSA index?"

He said that was only valuable when there were incentives around for higher quality animals.

"MSA has been in the world since 1998, and since then people have been talking about getting paid for the eating quality of the cattle they produce," he said.

"But really only in the last three to four years have companies actually been incentivising producers to produce high quality cattle with certain qualities."

He noted specific companies like Greenhams, JBS and NH Foods had been at the forefront of this change.

"The reason why it takes so long to incentivise such things is for us it's easy to say if someone gives you a good animal, then pay for it, but [the industry] needed to develop brands over time because if all of a sudden they got pull through, they might have got 100 clients and only had enough product to supply 80," he said.

But he said producers were savvy at working out how they could get that advantage.

"That understanding around incentives is here and probably here to stay," he said.

"People have really started thinking about the genetics and maturity patterns of their cattle; you want a more moderate growth, not too late. Everyone was chasing growth for years, but if you chase growth, then your percentage of maturity at the time you reach slaughter gets lower and lower.

"Pigs these days might get harvested at 25 per cent of their mature weight, whereas a cow if it's killed at 300 kilograms carcase weight, might be 75pc of its mature weight.

"But if we keep going for growth and get bigger and bigger animals, then 300kg carcase weight might be 50pc of its mature weight.

"You get late depositing tissue, so if we just select hard on growth, we're going to get worse and worse eating quality if we don't also select hard on IMF.

"We have witnessed this genetic trend in the lamb industry over the pas decade also."

He said you had to think about how much fat was needed in the system for flavour, tenderness, juiciness and yield, but also how much was needed on farm to ensure productivity, reproduction and resilience for our females.

"You've got to think of the productivity of animals because they spend a lot of time on farm, and that's particularly important for females," he said.

He said they were trying to classify whether international consumers were the same as Australian consumers in terms of their taste for our read meat.

"A lot of lamb work's been done in China and the United States and then beef's been taken all over the world; there's been some [testing] done in Japan, France, Poland, Wales, the US, plus many more," he said.

He said one interesting difference was that US consumers could taste the difference between grainfed and grassfed.

"We get a mixture of it in our supermarkets and butcher shops and our palettes aren't very sensitive to it whereas American palettes are," he said.

He said Chinese consumers rated our product and were often more lenient.