Milk production is stellar, especially in the north-west, but land is getting hard to find and more expensive.

In the last 10 years, Tasmanian milk production has grown 28 per cent while the rest of the dairy industry has flatlined, or worse.

And, if you're ever in any doubt about why Tasmanian dairy farming is taking off, take a flight from Melbourne to Hobart.

Even in the height of summer, the landscape below swirls with lush green circles created by one centre pivot after another coursing with water.

Costs vary but, in the north-west municipality of Circular Head, which produces 45pc of Tasmanian milk, water is delivered to farm for $117/ML.

There's more in the pipeline, too. The Tasmanian and Commonwealth Governments have committed $170 million on five more projects and planning is underway for yet another five.

Pinion Advisory partner Basil Doonan said the irrigation schemes had been a boon for both dairy and beef farmers.

"It's a great environment, we have rainfall and irrigation, and a lot of investors, whether they're family or corporates have that underlying requirement," he said.

"Anyone coming from the mainland is definitely scarred by the drought.

"And my conversations with them are that we here in Tassie undervalue irrigation and rainfall.

"They've been pushing up land price in securing those assets."

Indeed, Rural Bank's 2020 Australian Farmland Values report showed that sales of farms bigger than 120 hectares has grown by more than 9pc a year over the last decade to average $6893/ha last year.

"Anything with good water supplies received a premium and prices closed at near an all-time high."

All that water means that even in a drought year, most Tasmanian dairy farmers can continue to rely on good pasture production, feeding an average of just 1.3 tonnes of supplements, according to the most recent survey by Dairy Australia. 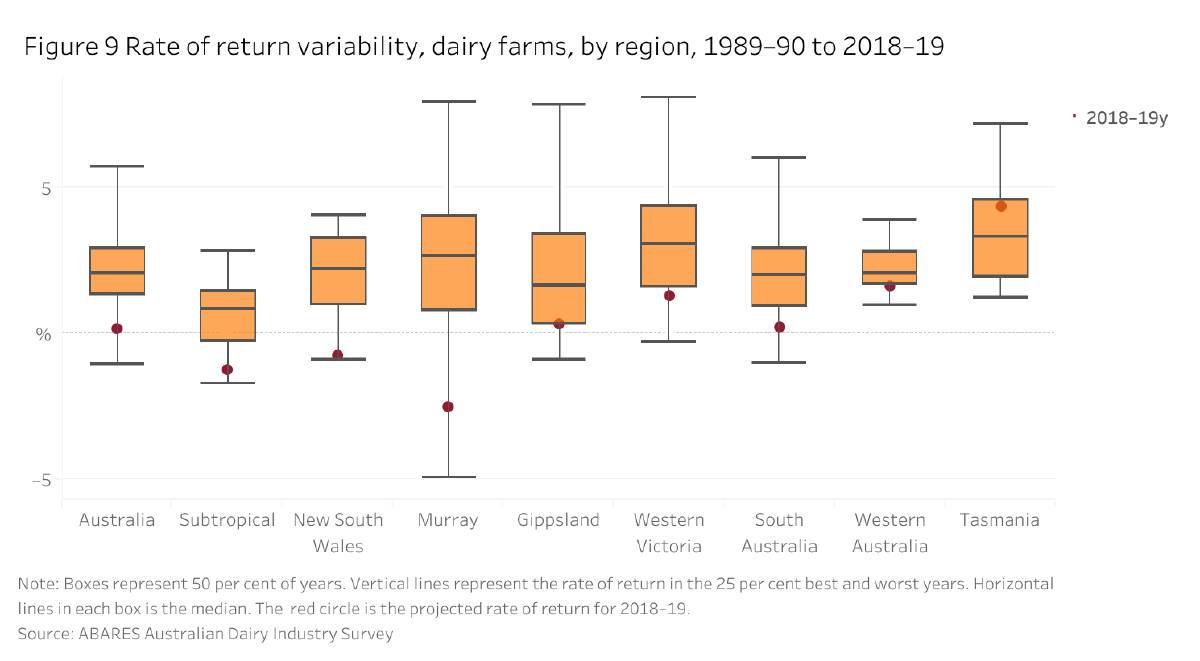 And the financial results are impressive.

Australian Bureau of Agricultural and Resource Economics and Sciences (ABARES) data shows that, aside from the relatively small and protected Western Australian industry, Tasmania is the only state where dairy farmers are consistently profitable.

The Tasmanian Government's 2019 guide for investors boasts "a higher return on total assets than other Australian states".

There's been a surge in very large farms. In fact, one in three Tasmanian dairy farms now milks more than 700 cows. 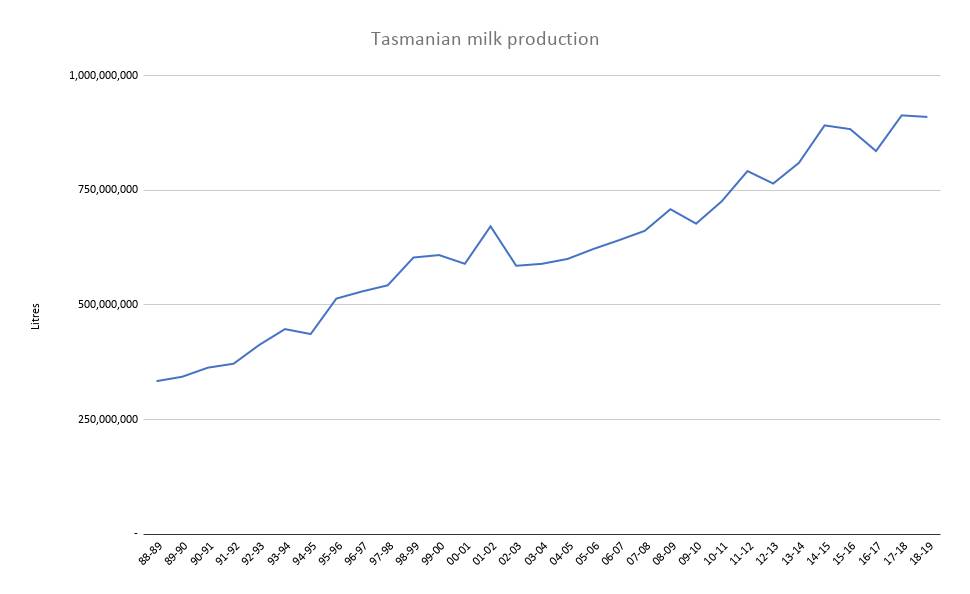 STAR: Tasmania is the only state with long-term growth.

In Circular Head Council, the average herd size is 561, more than double Australia's average of 276.

"Going back 20 or 30 years ago, corporate farming would have been a very small percentage of our land but now probably 65 to 70pc of the dairy farms are actually owned by corporates," Mr Quilliam said.

That comes as no surprise. Both the Tasmanian Government and Dairy Australia's local arm, DairyTas, have been heavily promoting investment in the sector.

"Our area's generally regarded as a great place to farm and there's huge amounts of money in superannuation funds, especially from overseas more than locally, and people and seeing dairy farming here as a really wise investment," Mr Quilliam said.

Even so, questions remain about how long Tasmanian milk production can keep growing. Click on the link below to read more about when it might reach its limits.