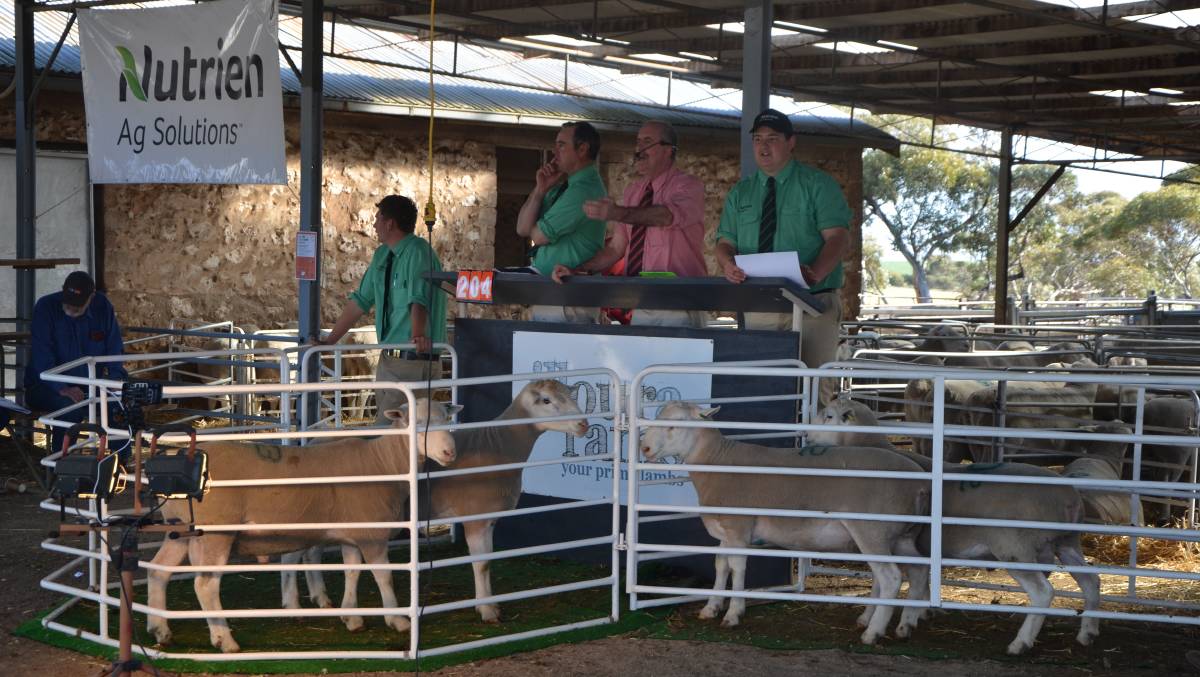 Demand for terminal sires has exceeded expectations so far this year, and there's a lot to suggest this trend will continue.

Demand for terminal sires has exceeded expectations so far this year, and there's a lot to suggest this trend will continue throughout the rest of the spring ram selling season.

The improved ram sale clearance rates and prices are largely being attributed to the positive state of the sheepmeat industry and the low ewe numbers across the board.

In SA, where ram sales are well and truly in full swing, Nutrien SA stud stock's Richard Miller said you would have been forgiven for expecting average prices to be back on a lot of the record prices last year, but that hadn't been the case.

"At this stage, they're only slightly back or some are holding firm on those record prices," Mr Miller said.

"And with the small number of sales we've had so far, basically all have had a 100 per cent clearance rate."

He said producers saw a positive future breeding prime lambs even though we were in the midst of the COVID-19 pandemic.

"I think the wool job could be a longer-term proposition before it starts to bounce back to where it was, whereas prime lamb production, even though COVID-19 put a hole in our export markets, I think a lot of people can see a fair turnaround with it does start to improve," he said.

"And if you're planning now for 12 months in advance, you're doing something right."

He said people were willing to pay the big bucks for terminal sires, knowing that the investment would eventually pay off.

And buyers were coming from far and wide thanks to the ability to buy online using AuctionsPlus.

A stud breeder who has just wrapped up a ram sale with a smile on his face was Allan Piggott from Illoura White Suffolks, Moorlands, SA.

He said he was extremely pleased with the result, particularly the clearance rate, which he believed was the most important factor.

"The last couple of years have been quieter as we didn't have the volume buyers because there weren't the ewes around, but I think there's a lot of confidence in the sheepmeat industry at the moment," he said.

"If you look at all the commodities, all are impacted by COVID-19, but lamb and mutton are doing well and there's potential for recovery that could be bigger than other commodities."

He said when the season got tight, it was usually the surplus ewes that his rams were joined to that were the first to go, so the strong demand meant producers were restocking.

"I've been in the game long enough to know that seasons and markets go up and down and certainly in the last two years, demand has been back," he said.

"Three years before demand was very strong, in fact stronger than it is now, so things certainly go up and down and it's about going with the flow."

"There were certainly concerns that ewe numbers might not have been out there but this shows the confidence that breeders and commercial producers have in the sheepmeat industry at the moment," Mr Baker said.

"Our sale was conducted through AuctionsPlus and the clearance rates were extraordinary particularly given people weren't able to view the rams in person."

He said while he had heard a lot of debate on the topic, he didn't believe producers were necessarily transitioning from buying Merino rams to buying terminal rams.

"The Merino is the backbone of the whole Australian sheepmeat and wool industry and numbers are at such a low at the moment," he said.

"People have still got to at some point breed replacement ewes so I think it's still important that that side of things are strong as is the terminal side of things."

Mr Baker runs Booloola White Suffolk stud at Baringhup, Victoria, and has his own on-property ram sale coming up next month.

He hopes demand stays strong for the sale.

"I think [the current circumstances] are indicative of an environment where people have got confidence even though the lamb job may have come back slightly on last year's highs," he said.