It's not only visitors who can't get enough of High Valley Cheese Co, Mudgee. It is even putting cheesy grins on the faces of renowned chefs. For Shaun Barry, there is nothing more rewarding than being able to look at something and say "I made that".

And that's why the Mudgee cheesemaker spends hours in the artisan factory at High Valley Cheese Co turning milk into magnificent cheeses - he loves it.

But cheesemaking hasn't always been on his radar.

Shaun grew up with a shearing contracting father in New Zealand and then spent close to three decades working as a finance project manager.

"I just wanted to produce something tangible," he said.

But as fate would have it, Shaun's father- and mother-in-law Grosvenor and Rosemary Francis had opened a beautiful winery and cheese factory at Mudgee. They were mixed cropping, sheep and cattle farmers at Dunedoo when they started to grow grapes on their farm in 1995, eventually opening a cellar door at Mudgee in 2004.

At the same time, with the arrival of cheesemaker John Grant to the district, High Valley began to produce artisan cheeses.

"They were very hardworking, and very hands-on and always out the front talking to customers, so they've earned their retirement," Shaun said.

As part of the succession plan, Shaun began working at High Valley two years ago, which at that time was concentrating on its wholesale cheese sales, with the cellar door leased to Gilbert Family Wines.

But it was only at Easter last year, when Shaun and his wife Nicola took over the company, that High Valley began to offer cheese tastings and retail sales once again. 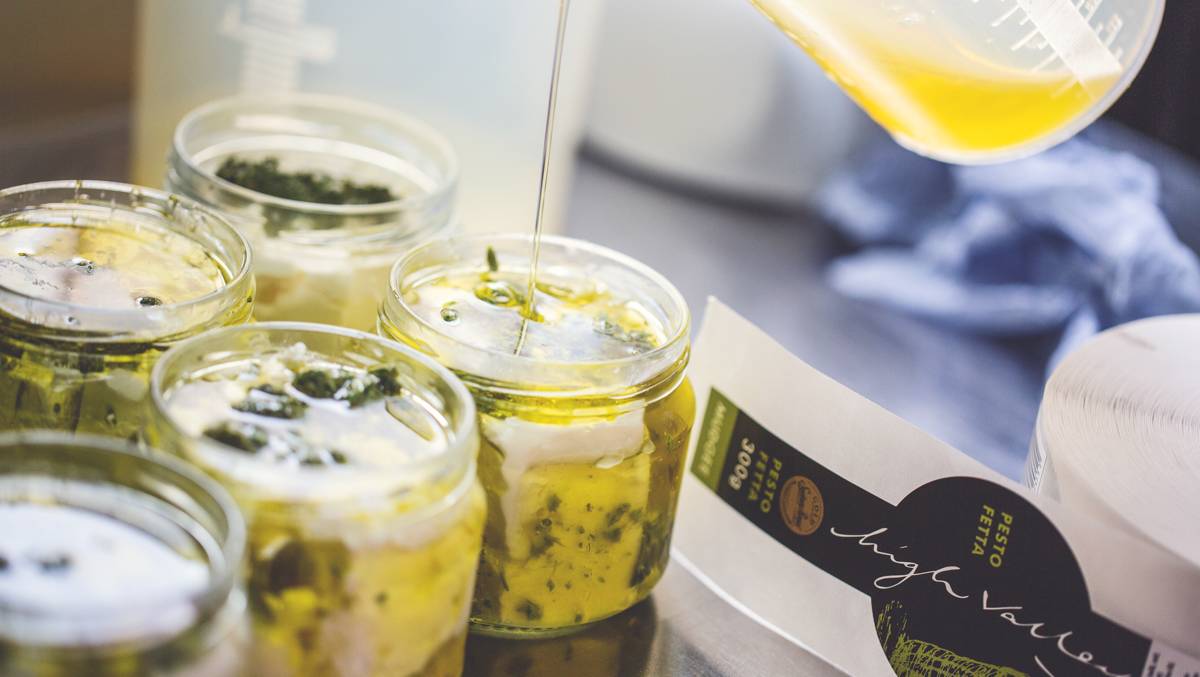 A FAVOURITE: High Valley's flavoured fetta cheeses are extremely popular, even ranking in the top three flavoured cheeses in the country.

And he hasn't looked back since, perhaps because he is so busy making cheese.

As the sole cheesemaker, Shaun spends his days creating all of High Valley's cheeses, using on average 4000 litres of milk a week.

It turns out he has the knack, with his pesto fetta winning gold at the 2019 and 2020 Sydney Royal Show competitions.

After this win, his fetta was named in the top three flavoured cheeses in the country, as a finalist at the Grand Australian Dairy Awards

After their last win, judge and renowned chef of Bennelong Sydney Peter Gilmore began using High Valley fetta in his restaurant after tasting it during judging.

"That's the kind of feedback that you want," Shaun said. CARE FOR A TASTE: High Valley's tasting room at Mudgee.

Shaun is very passionate about using local and regional ingredients for his cheeses.

He sources his milk from The Little Big Dairy at Dubbo, and uses local extra virgin olive oils and canola oils.

"We try to use everything local, right down to using cherry tree prunings from the local Roth Family Cherry Orchard to smoke our cheeses," he said.

"We get so much support from local cafes, cellar doors and restaurants."

Shaun is very proud of what High Valley Cheese Co achieves every day.

"We love what we are doing. I've really enjoyed it," he said.

"At the end of the day you are making something that you can look at and say 'I made that'." If you drop into High Valley Cheese Co, with its classic sandstone building overlooking the beautiful town of Mudgee, you can see Shaun Barry hard at work turning milk into delectable cheeses.

And as the only cheesemaker in the town, and especially since regional travel was allowed after the COVID-19 shutdown, he simply can't make cheese fast enough.

There is a range of cheeses at High Valley. As well as their famous fetta and marinated fetta, High Valley also creates a triple cream brie and a washed rind brie called Mudgee Rouge.

Shaun also makes a caerphilly, which is a Welsh farmhouse style cheddar, as well as a smoked caerphilly.

And which is Shaun's favourite?

"I think the Stefan Blue," he said. "It transforms the most when maturing. It has a life cycle of four months. With our cheeses, they are best left to mature after they are bought. They are more rewarding when fully ripe." Visitors to High Valley can sample and purchase the entire range of cheeses, while the popular fettas are available in a number of outlets in Mudgee and beyond.

The fettas are distributed directly to Harris Farm Markets and also by Foodies Australia into selected IGA supermarkets and delis.

Shaun said his challenge at the moment was trying to get glass jars in for his fetta, which he hasn't been able to access due to COVID-19 related supply issues.

He is hoping in the future to expand, and produce even more cheese so more visitors to Mudgee can enjoy a wonderful cheese and wine experience.