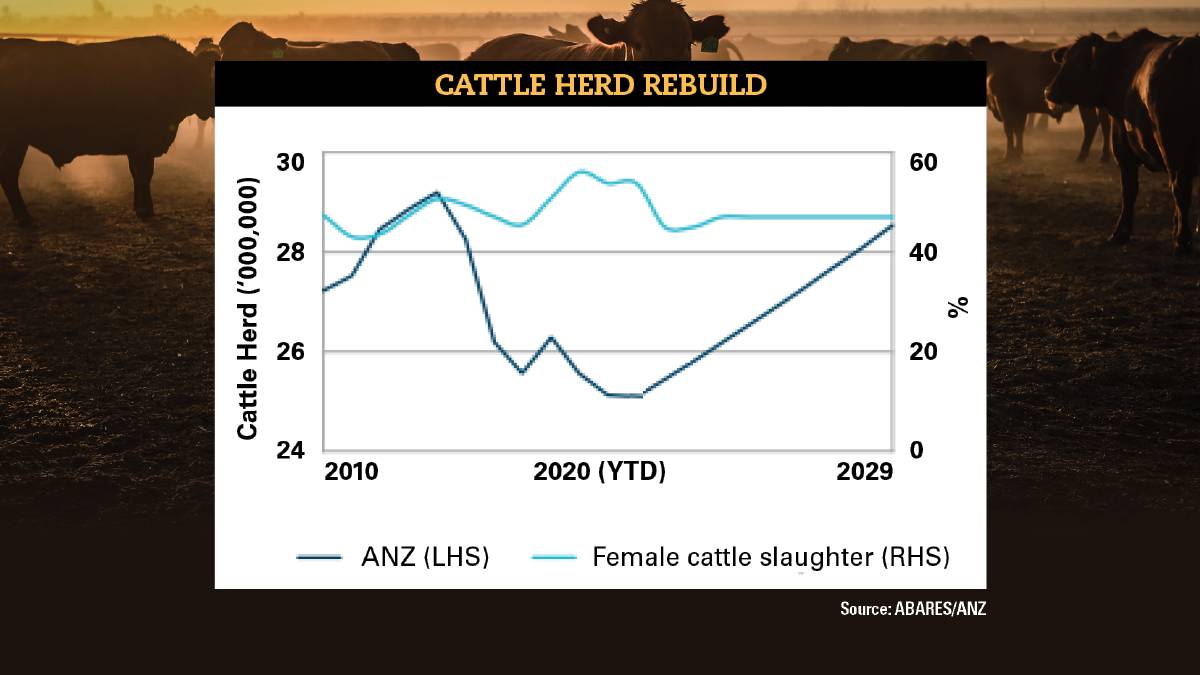 Herd rebuild will be long and slow: ANZ commodity report

THE forecast for a reasonably wet few months heading into 2021 will likely sustain pressure on cattle prices as restockers continue down the rebuild path.

Just how much impact the uncertainty around global demand and increasing competition will inflict on Australia's cattle market is the great unknown.

And while all are talking about the great herd rebuild, just what size is 'normal' for Australia is now also up for debate.

ANZ's latest Agri Commodity Report touches on these points, forecasting a long and slow rebuilding process over the next decade.

The bank's modelling suggests it would likely take four years to return to the 2016 level of 26 million head, but almost a decade to be back at the 2014 peak of 29m.

The herd fell to a multi-decade low of around 25m head at the start of this year following a mass drought-fueled sell-off.

ANZ's head of agri insights Michael Whitehead said the outlook was good for rain going forward, which would limit the number of cattle on the market for slaughter and reduce the chance of downward pressure on prices.

Presuming there was ample grass and reasonably-priced feed with good grain crops, the restocker and feedlotter competition that had taken the market to record highs in 2020 should continue, he said.

"Restockers are certainly leading the push, but feedlotters aren't far behind with demand staying strong for their product," Mr Whitehead said.

"Sitting behind them is the processors. They have to wear tighter margins, and we've seen reductions in processing capacity and shutdowns as a result, but they still have to fill orders."

Mr Whitehead said the beef herd size had been volatile over the past decade, largely on account of two factors: increasing demand out of China, which started in the middle of the decade, and the drought.

The ANZ report said for the first half of the past decade the benchmark Eastern Young Cattle Indicator sat steadily between 300 and 400 cents per kilogram carcase weight but when the Chinese market opened up to more Australian imports, prices quickly rose to between 500 and 700c/kg. Then the flood of cattle on the market as things turned dreadfully dry pushed it back below 500c.

2020's rise and rise is unparalleled and even the dip of the past few weeks hasn't dented the close-to-300c-higher level the market is at now compared to this time last year.

ANZ's analysis says another factor which could potentially come into play is whether a reasonable number of producers look to change their operations to increase cattle numbers in the long term by either running fewer sheep, cropping less or cutting dairy herd numbers. The belief that the fundamentals are in place for next season's calves to be highly-priced could well foster those sort of moves and in turn put additional upward pressure on prices.

So if the market continues at an historical high level, will exports keep pace with prices?

This is something the beef industry needs to treat with caution, Mr Whitehead said.

"Export prices have been good but there are growing factors pointing to increasing competition," he said.

Secondly, United States competition is ramping up. The Chinese need to buy a lot of agricultural product from the US to fulfill trade agreements, Mr Whitehead said.

US volumes would grow not just in China but in Japan and Korea, he said.

"Then there is the US itself as a market. The fact the Chinese pig herd is recovering from African swine fever means the buildup in US beef that would have gone into China will need to find a place back at home," Mr Whitehead said.

The US meat processing sector has largely recovered from its COVID-19 issues which means less space in its domestic market for Australian beef, and there are also South American competitors there.