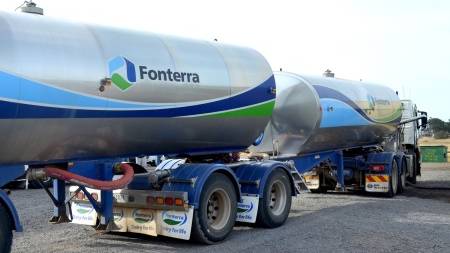 NZ PRICE UP: Fonterra has lifted its forecast farmgate milk price for its New Zealand suppliers.

Fonterra has lifted its forecast farmgate milk price range in New Zealand in the wake of another strong result in the Global Dairy Trade auction on Tuesday night.

Fonterra has lifted its forecast farmgate milk price range in New Zealand in the wake of another strong result in the Global Dairy Trade auction on Tuesday night.

But there has been no word on a step-up in the price paid to its Australian suppliers.

Fonterra hasn't moved on its Australian opening price of $6.40 a kilogram milk solids.

Global Dairy Trade prices have rebounded spectacularly in the past few months, recording a sixth consecutive rise on Tuesday night.

The whole milk powder index was up 2.3pc.

The only commodity to fall was skim milk powder, down 1.5pc.

"Also, prices are around 13pc higher than a year ago," he said.

"Notably, milk fat prices continue to be on a tear.

"Butter prices, for example, surged further overnight, so that they are now up over 50pc on their 2020 low back in September.

"As mentioned previously, we believe that this is a key development for the recovery in global dairy prices as it demonstrates that demand for products consumed in restaurants and other food service settings has returned."

Its chief executive officer Miles Hurrell said the lift was a result of strong demand for dairy.

"In particular, we've seen strong demand from China and South East Asia for whole milk powder (WMP) and skim milk powder (SMP), which are key drivers of the milk price," he said.

"This lift in our forecast farmgate milk price is good news for New Zealand farmers.

"Now that we're through the peak of the 2021 milking season, the impact of any changes in global market dynamics is reducing and our view of the season is firming up.

"However, we are continuing to keep a close eye on a number of factors.

"These include New Zealand weather conditions, expected challenges from further waves of COVID-19 and increasing milk production in the northern hemisphere."

Analysts had been tipping the increase since the last auction.

"That strength is across all contract periods, indicating solid demand," he said.

"The overall strength at this auction, combined with the steady gains recorded at the proceeding events, has prompted us to lift our milk price forecast for the 20/21 season from NZ$7 to NZ$7.40.

"Our forecast was outside of Fonterra's December guidance of NZ$6.70-$7.30, but we felt it was warranted by the strength in prices over all contract periods for the rest of the season.

"In the wake of the GDT result this morning Fonterra have lifted their guidance range to NZ$6.90-$7.50/kg MS.

"Accordingly, the midpoint of the range, which farmers are paid off, has increased to NZ$7.20/kg MS."

"Thus, our forecast is at the top of Fonterra's updated forecast range," Mr Penny said.