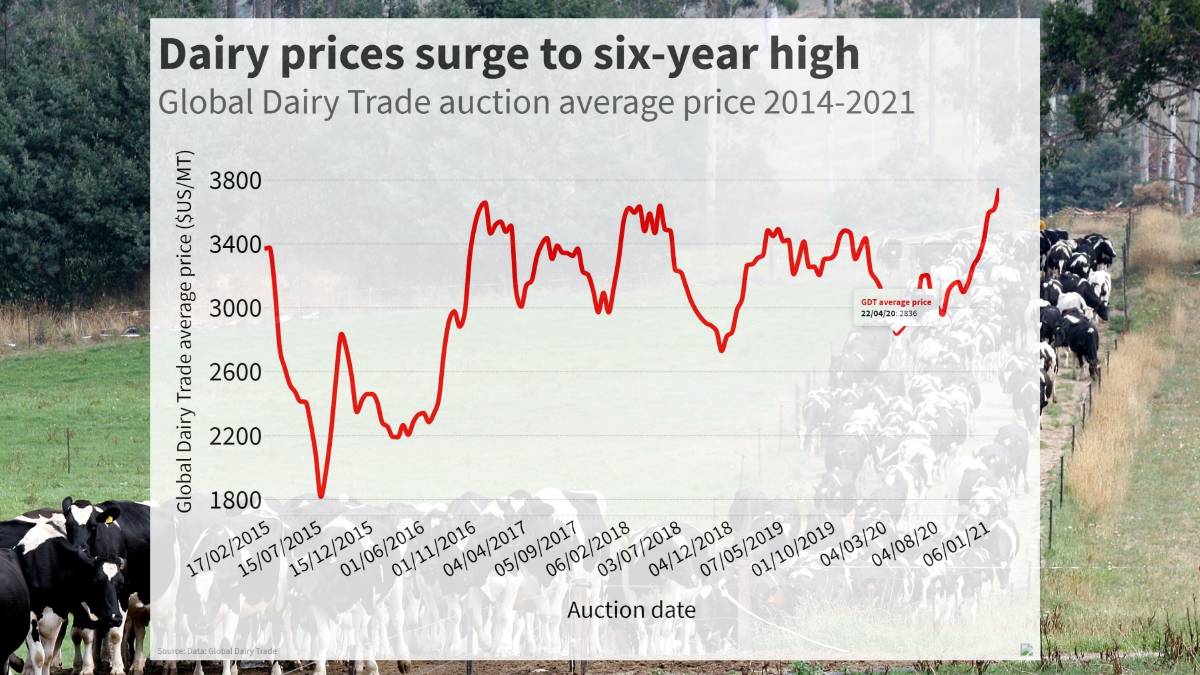 The Global Dairy Trade price index increased for the seventh consecutive auction, with rises in all commodity groups.

The big lift took some pundits by surprise.

New Zealand bank ASB economist Nathaniel Keall said it was a whopper of a dairy auction, as strengthening demand pushed up prices across the board.

"In other words, dairy prices are continuing to surprise on the upside."

Westpac senior agri economist Nathan Penny said further strengthening was likely in the short-term, but prices would begin moderating later in the year.

Overall prices have bounced 22.9pc since mid-November and are about 20pc higher than a year ago.

Both economists pointed to a resurgent Chinese economy as the reason for the price surge.

"Strong demand from China has fuelled gains at auction over the past three months," Mr Keal said.

"Domestic consumption has risen steadily over the course of 2020 as the Chinese economy has picked up, but domestic stockpiles haven't managed to keep up, despite aggressive purchases through most auctions."

Mr Penny said with COVID-19 under control, China was the only major global economy to grow in 2020.

"Importantly, as the economic momentum has continued into 2021 household spending has gathered steam," he said.

"Growth in South-East Asian economies is not far behind, further underpinning demand for New Zealand products.

"The global rollout of COVID vaccines will give global food demand a second 'shot in the arm', particularly from other secondary dairy markets."

Mr Keal was also upbeat about the impact of the COVID vaccinations.

"Hopes that widespread vaccination and further stimulus out of the US could lead to an uptick in economic activity have been fuelling the trend, and there is a lot of talk about a new commodity price 'supercycle' beginning."