The artisan cheese factory at Mendooran has been in operation since 2018. An artisan cheese factory is chalking up achievements as it moves toward its third anniversary of operation in a small town near Dubbo.

Fresh from the success, it's set to launch a new addition to the range at Coonabarabran on Thursday.

The new variety is not the only change in 2021.

Mrs Kiem reports co-founder Pip Archer has moved on to pursue other interests.

The pair first donned their aprons in August 2018, and within a year had four cheeses in their repertoire, stocked at Dubbo and across the region.

Mrs Kiem continues to look to the future, and also reflected on the COVID-related hurdles faced in the past 12 months.

"2020 was as much a challenge for our small, local cheesemaking enterprise as it was for larger cheese companies," she said.

"We had to really think about how much cheese to make when cafes were closing and markets were non-existent.

"Thankfully, our cheese fans in the district were able to sniff out their favourite Blue Sky Cheeses in various local outlets that were still able to trade."

Mrs Kiem said they were not deterred, creating a new cheese that coincided with "the best harvest our farmers have had in many years".

A Swiss cheese delivered the Mendooran makers a second silver medal, scoring above all others in the semi-hard eye class.

"Not a bad effort for two girls in a tin shed," Mrs Kiem said.

The passionate cheesemaker is counting down to revealing the new product. 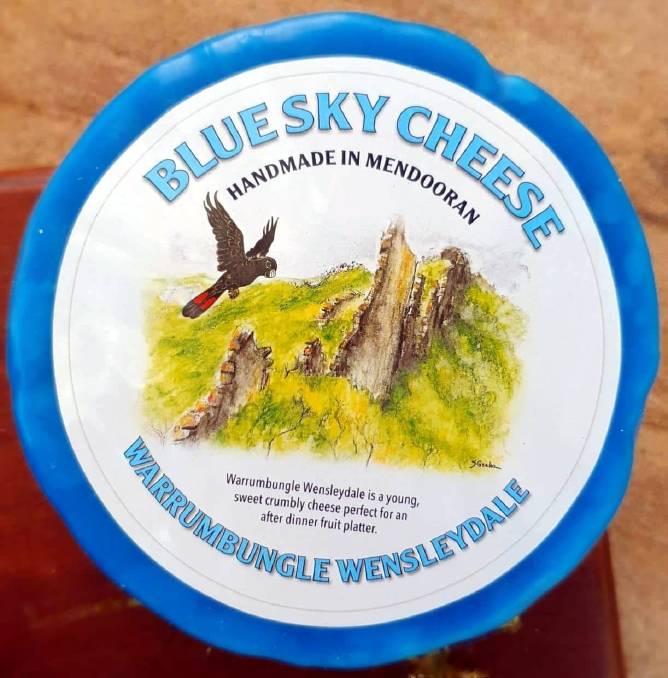 An artwork of Coonabarabran artist, the late Sue Graham, was chosen for the new cheese. Photo contributed.

"Wensleydale is a cheese that is very rare to find in Australia, beloved of Wallace in the animation series, Wallace & Gromit, it already has a cult following," Mrs Kiem said.

The maker describe it as "a hard, yet crumbly cheese, traditionally made in Yorkshire, UK".

"Sealing our Wensleydale wheels in vibrant blue wax has been a learning curve and we love the way it looks," Mrs Kiem said.

Sealing our Wensleydale wheels in vibrant blue wax has been a learning curve and we love the way it looks. - Blue Sky Cheese founder Deb Kiem

"It's too special to be wrapped in plastic."

Not only does its name honour the local landscape, but its label also has special significance.

"Coonabarabran artist, the late Sue Graham, painted the Warrumbungles in her unmistakable style in the 70's and 80's," Mrs Kiem said.

"It was a natural choice to use her watercolour sketch of the 'Breadknife' for our label."

Everyone is invited to the launch, to take place at Feathers Cafe from 6-7pm.

"Come along and meet Allison Martin, our new assistant cheesemaker, who has been up to her elbows in curds and whey from the trial stages to the final recipe," Mrs Kiem said.

"If you can't make it for our release...keep your eyes open for that bright blue wheel with the Breadknife on it in the fridge at The Daily Scoop in Dubbo who have also been a loyal stockist of Blue Sky Cheese since we began late in 2018."