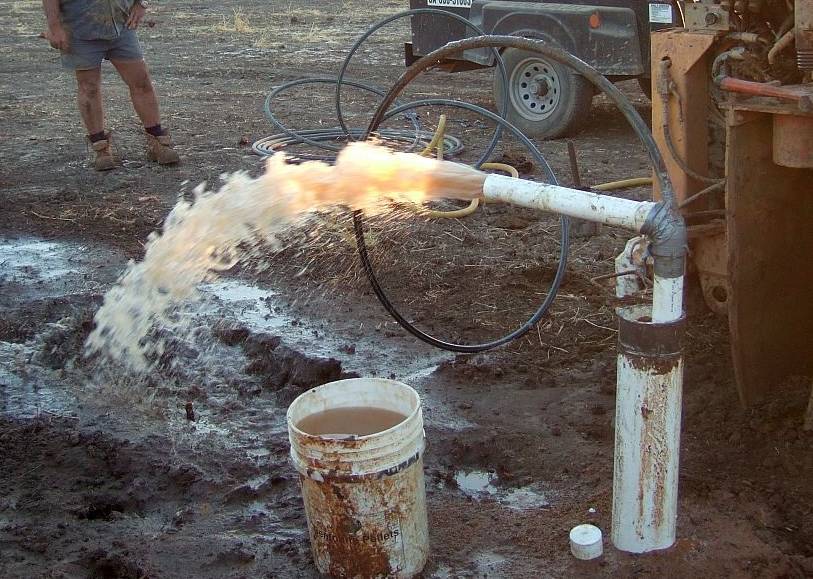 BORE CONTROVERSY: A government decision to "gift" a horticulture development 40 gigalitres of groundwater for irrigation has been questioned.

Plans to transform an outback cattle station into one of Australia's biggest horticulture developments have been questioned.

Plans to transform an outback cattle station into one of Australia's biggest horticulture developments have been questioned.

Traditional owners have formally appealed the Northern Territory government's granting of a licence to allow 40 gigalitres to be pumped from groundwater bores.

The government had confirmed the irrigation water would be made available to Fortune Agribusiness for free, despite experts saying the water would be priced as much as $100 million in other jurisdictions.

The Central Land Council this week applied for a review "of the unprecedented decision to gift a private company 40,000 megalitres of finite water reserves each year for three decades to grow fruit and vegetables in the desert, largely for export".

Fortune Agribusiness chairman Peter Wood said the company respected the CLC's decision to seek a review in accordance with the NT's Water Act.

The proposal still needs formal approval from the EPA.

After the water extraction licence was granted earlier in the month, Mr Wood said the company planned to begin with the first stage of its development in mid 2022.

The CLC has asked the government to order a halt "on all activity" until the appeal is decided.

The company was controversially allowed the biggest water licence ever granted in the Territory so it can proceed with the $150 million project.

Fortune Agribusiness, headquartered in Melbourne, is a group of investors, who bought the 294,900ha Singleton Station in 2016.

The station changed hands for a reported $10 million.

The government decision meant groundwater would be released to Fortune in four stages over the next decade, peaking at 40 gigalitres through about 100 bores.

The station receives an annual rainfall of 386mm.

The farm will cultivate permanent crops such as citrus, grapes, avocados, onions, rockmelons and other crops.

"The protection of environmental and cultural assets, along with the interests of existing users, are always the key priorities when assessing water licence applications," NT Controller of Water Resources Jo Townsend said when approving the licence.

"That's why stringent conditions have been attached to this water licence, which will be monitored closely by the department and publicly reported."

Environment Centre NT said the decision defied logic and could result in the aquifer being drawn down by 50 metres.

"A drawdown of that level is unsustainable and could kill much of the life on the surface, such as the trees, whose roots rely on the water much closer to the surface," director Kirsty Howey said.

ALL THOSE AGAINST: Members of the Central Land Council vote to appeal the NT government's water licence decision. Picture: CLC.

Australia National University economics professor estimated the 40 gigalitres could be worth $100 million anywhere else than the NT where irrigation water is free.

There have been calls for the NT to place a change on water, particularly with plans to expand cotton growing in the Territory.

Of all other states and territories, only Western Australia does not charge for irrigation water.

But the providers of irrigation supply services - including Harvey Water, Ord Irrigation, the Preston Valley Irrigation Cooperative and the Gascoyne Water Cooperative.- do charge their customers for the services.

Minister for Water Security, Eva Lawler said the government has already delivered significant reforms to the allocation and use of water in the Territory.

"We are also developing a long-term, comprehensive Strategic Water Plan that will assess all policy options for demand and supply-side management," Ms Lawler said.

"Water is a critical issue for the Territory's future and Territorians will have the opportunity to have their views heard."

Neither the Northern Territory Cattlemen's Association or NT Farmers wanted to comment on the issue.

Singleton Station is also clearing some of its leasehold land to make way for the development.

"We call on the government to immediately stop the native vegetation clearance and non-pastoral use permits for the company, as well as the environmental impact assessment," CLC chief executive Lesley Turner said.

"Our constituents now want us to pursue all avenues for objection because too little is known about how the decision will affect community drinking water for decades to come, including the impact on native plants, animals and sacred sites.

Hydrogeologist Dr Ryan Vogwill provided a report to the CLC which claimed the government's water resource and impact assessment were "simplistic, based on inadequate investigations and very little site-specific data".

Dr Vogwill said the "rushed approval process" for the Singleton allocation fell "well short of" what would be required for far smaller water allocation decisions in his home state of Western Australia, a world leader in groundwater management.

Mr Turner said the only credible response to the CLC advice was to seek an independent peer review of Fortune Agribusiness' 'adaptive management' plan.