Rabo young ambassador and Nuffield Stewart Borg on feed and shelter options for grain-fed in the tropics. 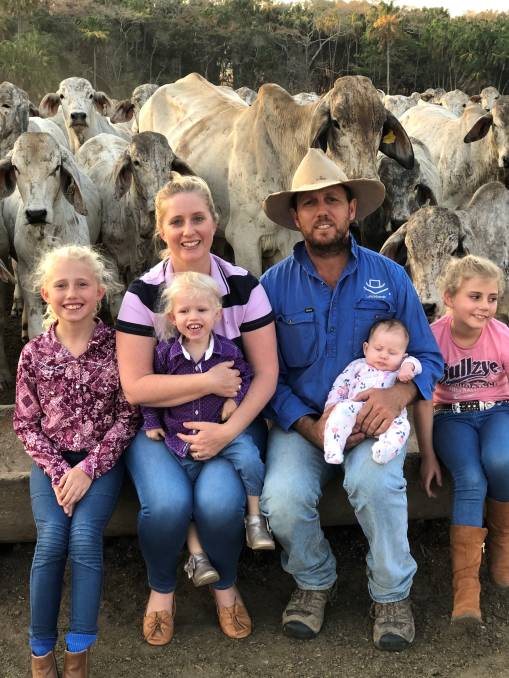 THINKING AHEAD: Beef producers and aspiring feedlotters Stewart and Sarah Borg and family.

NORTHERN expansion of the feedlot industry has the potential to not only bridge feed gaps in order to deliver consistent supply year-round but it would go a long way towards drought-proofing the cattle game.

So says the latest Nuffield Australia report, which comes from North Queensland producer Stewart Borg, who has also been the Rabobank Young Beef Ambassador for the past three years.

He will hand the baton over to a new ambassador next week at Beef Australia.

With support from Meat & Livestock Australia, Mr Borg has spent much of the past three years exploring alternative feed sources and animal housing options better suited to tropical conditions in order to pave the way for northern lotfeeding.

With global demand for beef growing, the potential is strong for Australia to grow the amount of beef it produces and exports, according to Mr Borg.

His report, however, warns against Australian beef becoming just another commodity on the world stage, competing with countries such as Brazil and India as just a major beef exporter. Instead, the path to prosperity was being recognised as a premium product and rewarded for quality, he argues.

Producers will need to ensure that the quality of carcasses supplied to processors is as high as possible.

Thus, the feedlotting sector is in a positive place - and indeed plenty of analysts have identified big potential for the growth of Australian grain-fed beef, not the least being the demand coming out of China.

Mr Borg's report identifies a swag of benefits to expanding lotfeeding, from the ability to finish animals when pasture feed is deficient to opportunities to meet a wider range of markets.

It then highlights areas of adaptation required to take it out of traditional areas in further north, into tropical areas of Queensland, Western Australian and the Northern Territory where the monsoonal effect is at play.

The key challenges - heat, humidity and rain - can be overcome with good prior planning and solid investment, Mr Borg says.

"More and more people are trying to bring in feeding systems to live export systems, in order to produce cattle at specifications more consistently, and in the right time frames," he said.

Further, expansion of lotfeeding means building in alternatives for northern breeder operations should any collapse in the live cattle trade occur.

The report was informed by visits to the Americas investigating feedlotting as part of the Nuffield scholarship, along with Mr Borg's experiences as a property owner and aspiring lotfeeder as he constructs one of the first feedlots in a tropical environment.

With his wife Sarah, Mr Borg runs Marklands, a 2400-hectare mixed cropping and beef enterprise near Mackay. They operate a range of enterprises from breeding to selling bulls, producing feeder steers, sugarcane and several pulse bean and fodder crops.

He says although the tropical climate poses challenges for lotfeeding, there were many advantages.

"Northern Australia is proximal to both emerging and existing markets, receives higher and more reliable rainfall and is close to large supplies of feeder weight cattle. There are also a range of feed sources, like soybeans, tropical grasses and palm kernel, which have lotfeeding potential," he said.

While the lotfeeding sector currently relies on cereal grains like wheat and barley, development of tropical pasture varieties had been rapidly progressing in recent years, he said.

As well, several hybrid grasses hold enormous potential for application in northern Australia, either through use as hay or silage.

"We've rolled out Mulato 2 over a large portion of our country with excellent production gains."

Mr Borg's report identifies the need for other industries to expand alongside a northern feedlot sector.

"From large-scale water schemes to cotton and cropping and logistics and handling facilities, these developments will ensure processing and supporting business follow," the report said.

"This will stimulate the economy and see agriculture in northern Australia boom."