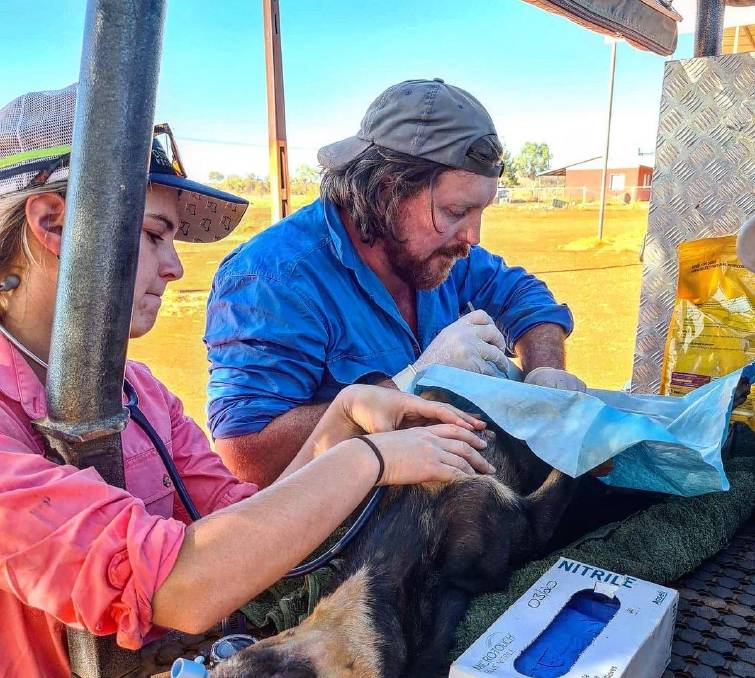 "We did blood testing on dogs at Alpurrulum on Lake Nash and they are 40 per cent positive with ehrlichiosis," he said.

Lake Nash is 18km from the border and two hours from Mount Isa.

Dr Costello has called on tourists like the grey nomads returning to northern Australia for the popular dry season to be alerted to the disease.

He fears infected dogs, and the host of the disease, the common brown tick, will rapidly spread the disease right around Australia without urgent action by dog owners.

He said in other countries where ehrlichiosis had been endemic for generations the dogs had picked some resistance to it which was not the case in Australia.

Thousands of dogs have died with Dr Costello seeing 80 per cent mortality from ehrlichiosis infections.

"We are about to have a disaster on our hands," he said from his clinic at Tennant Creek, in the Northern Territory.

Ehrlichiosis was first discovered in northern WA a year ago and has now been found throughout the NT and the north of South Australia with cases in travelling dogs in NSW and Qld.

Tasmania is moving to apply border restrictions in an effort to keep both the disease and ticks out.

Infection with ehrlichiosis is a nationally notifiable disease and vets around Australia have been alerted to its spread.

The disease is carried by the common brown tick.

"Before moving dogs within or into Queensland from other states or territories, the likelihood of E. canis infection should be assessed by the dog owner, dog carers, persons in charge of the dog or managing the movement of the dogs, and/or a registered veterinarian," reads the official advice from the Qld government.

The WA government has movement restrictions for dogs travelling from the north to the south, which include proof of tick treatment and protection.

Victoria's official advice is for owners "to avoid" bringing dogs into Victoria from other states and territories.

Before travelling to South Australia dog owners are advised to make sure their dogs are in good health and not showing signs of illness, free of ticks and on a current tick control program.

NSW advice is for owners moving their dogs from active disease locations to assess their dog's health and history before moving.

"... people who plan to move or adopt dogs from interstate should always check where animals are from, what tick prevention they have been on, and their health status."

Dr Costello said there was no stopping the spread of the disease.

"The horse has bolted," he said.

"I am seeing many cases every day where most of of the dogs die."

Authorities say the best defence to ehrlichiosis is two forms of tick protection, there are no vaccines.

Vets like Dr Costello said the popular tick prevention through chewable tablets was not enough on its own.