Dairy farmer confidence levels have leapt in the past year on the back of good seasonal conditions and strong milk prices that have lifted farm profitability levels. Dairy farmer confidence levels have leapt in the past year on the back of good seasonal conditions and strong milk prices that have lifted farm profitability levels.

But the improved confidence has not translated into increased national milk production, with minimal change in the past 12 months.

And it said labour shortages were a big concern for dairy farmers across the country.

Globally supply growth has been modest while demand remains solid, driven by China.

But the COVID-19 pandemic was shaking market fundamentals that could have implications in coming years.

Favourable operating conditions had had a substantial impact on industry sentiment, the report said.

Data from the latest National Dairy Farmer Survey revealed 64 per cent of dairy farmers were feeling positive about the future of the dairy industry, up 20pc from last year and 30pc from the low point in 2019.

The positive level is the highest since 2016 - with the national survey that year taken just before the disastrous milk price clawback.

The survey revealed a jump in farm profitability.

"For the 2019/20 financial year, the proportion of profitable farmers lifted significantly, with 80pc reporting a profit," the report said.

"This year, profit expectations have lifted even further, up to 88pc, which represents the highest proportion of profitable farmers since tracking commenced in 2014/15."

Almost two-thirds expected this year's profit to be higher than the average of the past five years.

But again the picture was patchy.

Only about half of the farmers in the Subtropical Dairy and Dairy NSW regions were profitable in 2019/20 and fewer than two-thirds of farmers with herds of less than 150 cows (63pc) made an operating profit. 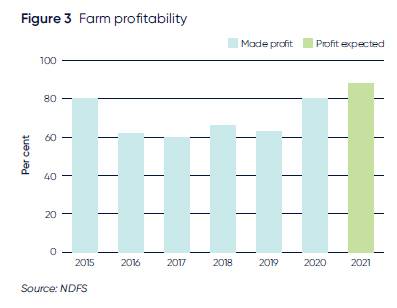 This profit boost has seen a lift in on-farm investment.

Almost all surveyed farmers (91pc) reported making investments in the past two years, 27pc of which were considered major ones.

The investment is expected to continue with 88pc of farmers intending to undertake investment in the next two years - with machinery, dairy and irrigation plants top of the list.

But the lift in confidence and profitability has not translated into a milk production increase.

"Despite a significant uplift in farmer sentiment following one of the best seasons on record, Australia's national milk pool remains stagnant," the report said.

"A key factor behind this development is the large proportion of farm businesses operating in a steady enterprise phase.

"While the number of farmers looking to expand their business has grown, almost twice as many are aiming to maintain their current size.

"Additionally, an increasing proportion of businesses are looking towards a maintenance approach for the next three years.

"This suggests that business consolidation, and possibly debt reduction, are considered to be of higher importance compared to growth."

Dairy Australia is expecting milk production to stabilise or grow slightly in 2021/22.

"Looking ahead, several factors are aligning to indicate the possibility of modest milk production growth in 2021/22," the report.

"Dairy Australia's initial forecasts suggest 0-2pc growth relative to this year, which would equate to a national milk pool of between 8.80 and 8.97 billion litres."

The report said the market outlook for dairy was positive.

Global supply was stable - despite the roller coaster created by the COVID-19 pandemic.

Milk output from the four largest exporters - New Zealand, the United States, the European Union plus the United Kingdom and Australia - has been steadily increasing but at a modest rate of 1-2pc for much of the past year.

Global demand has so far absorbed the additional milk produced - with China the key driver of this.

The domestic market is strong with the pandemic-inspired swing to branded dairy products lifting returns.

But the report said this did not mean everything was the same.

"Some consumer groups have decreased dairy consumption and many shop differently than before, forcing the supply chain to stay on its game to keep up with these changes," it said.

"More conscious consumers present both challenges and opportunities, with the industry's ability to grab the attention of shoppers remaining vital for ensuring strong demand in the future."

The report also warned that the pandemic could have implications for the industry down the track.

Dairy's growth in the past few decades has been on the back of a growing middle class globally.

"Years of rising incomes saw many lifted out of poverty, with the expectation this trend would continue for some time," the report said.

"Over the last 20 years, this socio-economic shift has provided the backbone for continuously increasing demand for dairy - and the current pandemic may have fractured it.

"COVID-19 has thrown the world into one of the largest economic recessions in history, pushing people back into poverty after years of progress."