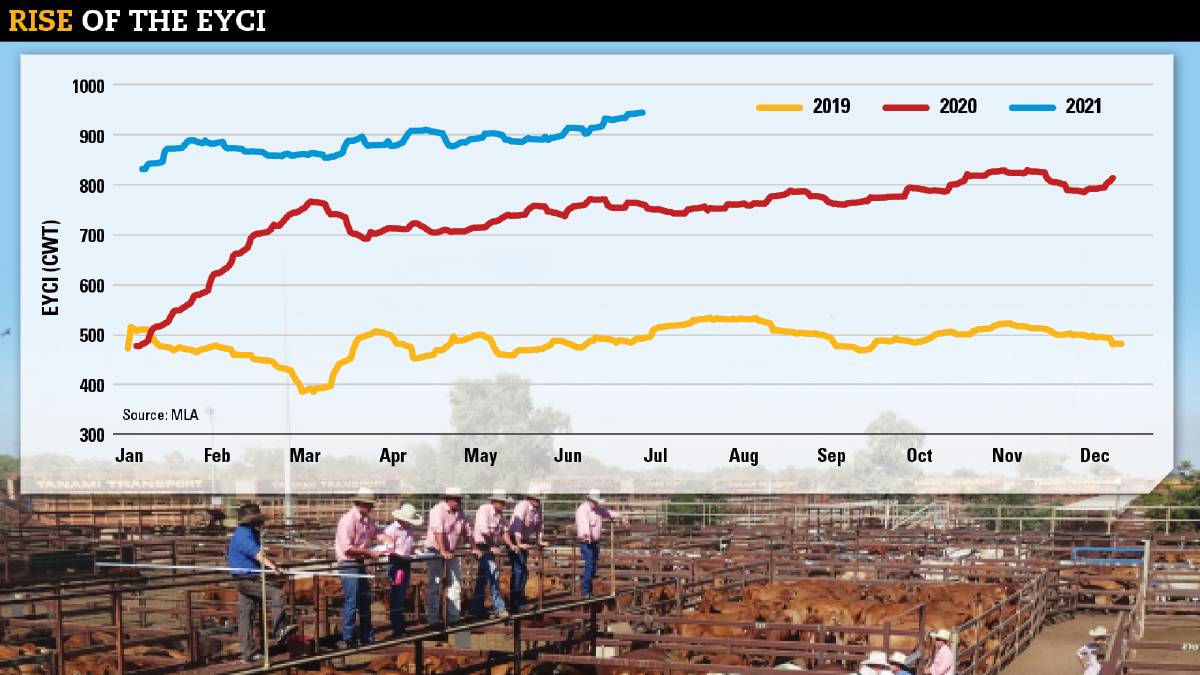 EYCI hits yet another record; no easing in sight

YOUNG cattle prices continue to astound, leaping to new records again this week as feeder buyers and restockers show no signs of backing down on their head-to-head battle for the limited numbers on offer.

The Eastern Young Cattle Indicator yesterday hit yet another record of 951.71 cents per kilogram carcase weight, having jumped 17c in the past week and 45c over four weeks. It sits 199c above the year-ago level.

Late last week, it smashed through the inflation-adjusted 'real' record.

Analyst Matt Dalgleish, Thomas Elders Markets, explained the last time prices were at this level was in 1965, when they reached 936c in 2021 dollar value.

Rain across much of Queensland and northern NSW's cattle growing country in the past week has kept the feed coming and topped up already-overflowing producer confidence.

Nobody is talking about the bubble bursting, although many analysts and agents felt the upward movement would pull up around 950c. Still, the market is not likely to drop away fast and heavy, they say.

Rabobank's July Agribusiness Update says while prices are over-inflated, and with increasing supplies they should contract, it is difficult to see any change in the market at the moment that would cause prices to drop.

Saleyard numbers in NSW and Queensland dropped through June, with NSW numbers dropping to the lowest point in a decade for this time of year, Rabobank's Angus Gidley-Baird wrote.

Ongoing winter rain is both contributing to producers holding on to stock and driving restocker demand.

Feedlot buyers, however, have outpaced producers over the past week to make up the biggest buying category of EYCI-eligible cattle. Typically that has only been by a few percentage points but yesterday it stretched out to a difference of 6pc.

Northern NSW agent Matthew Duff, Harold Curry at Tenterfield, said it was a simple case of not enough cattle but too much grass that was keeping the cattle market red hot.

"Numbers normally drop off at this time of year anyway, but this year there are even less around and there is the feed to keep people buying," he said.

And there was no easing to that tension in sight, he said.

"A lot went early and sold more weaners than normal in our autumn sales. Numbers will be back in spring, especially with the way the weather is looking because no one will be forced to sell," Mr Duff said.

"Feed in paddocks looks like it will now have to be slashed, such is the excess, and that is incredible considering two years ago it was dirt."

"The sharp fall in the national heavy steer price is a dark cloud worth watching though, as expectations of final turnoff prices are a key factor sustaining the market's willingness to continue to pay up for young cattle," he said.