High pasture harvest is not enough for consistently high levels of profit - a high percentage of pasture in the diet is also required. 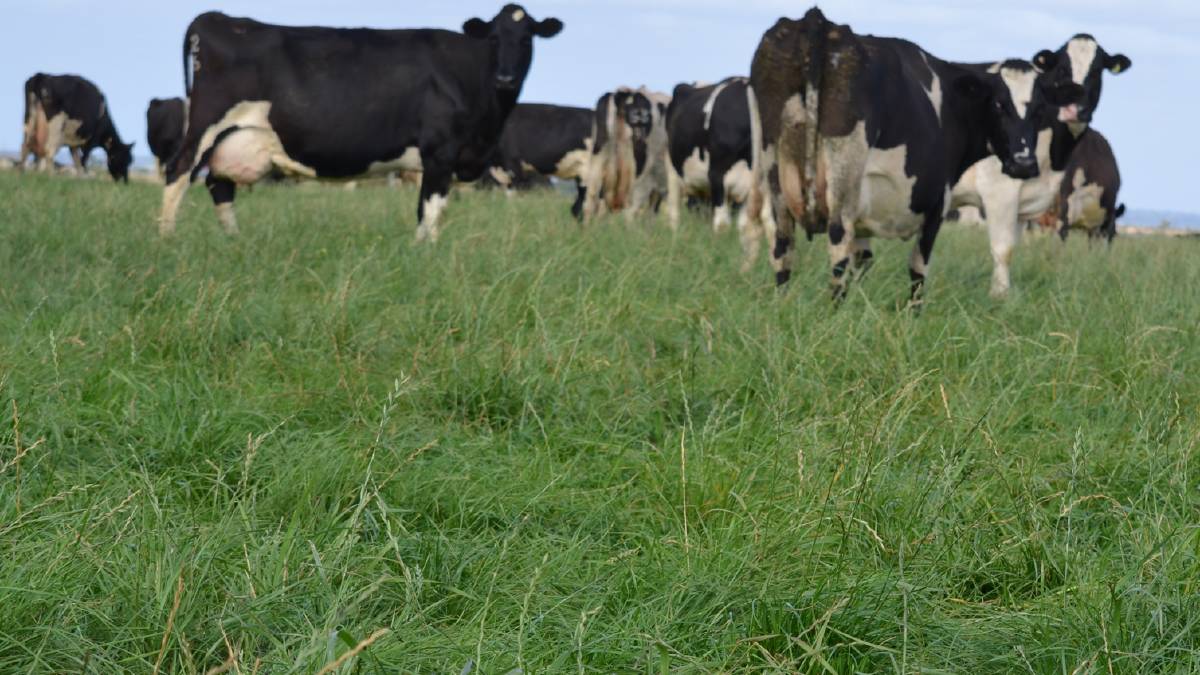 PASTURE: There is strong supporting evidence that pasture as a percentage of the cows' diet correlates with profit.

High pasture harvest is not enough for consistently high levels of profit - a high percentage of pasture in the diet is also required.

A majority of Australian dairy farmers and their consultants can often be heard to make the following two statements:

This trend has been aligned with a strong focus on cow performance, including nutrition and genetics.

In the past two decades there has also been a trend of increasing cost of production and decreasing profit, which has resulted in all regions except Tasmania losing international competitiveness with commensurate reductions in the amount of milk produced from these regions. 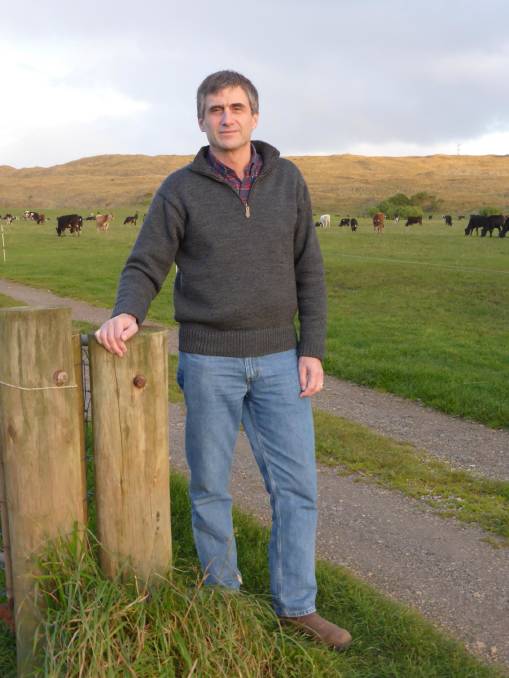 ADVANTAGE: Farm economist David Beca says New Zealand and Ireland are countries that demonstrate the advantage of including a high percentage of pasture in the diet on cost of production and profit.

Although there is not a lot of robust data available on regional changes in pasture harvest, it does appear that Australian dairy farmers on average have maintained, if not increased, pasture harvest for the past 20 years, and Australian farmers have made at least as much improvement, as say, New Zealand dairy farmers.

This can be seen in Table 1, which includes a cost of pasture for all regions in Australia, as well as for New Zealand, compared with concentrates and forages from these regions. Regardless of whether pasture cost is low as in Tasmania and Gippsland (and New Zealand), or high as in northern Victoria, NSW and Western Australia, the cost of concentrate, in particular, is substantially higher than for pasture. 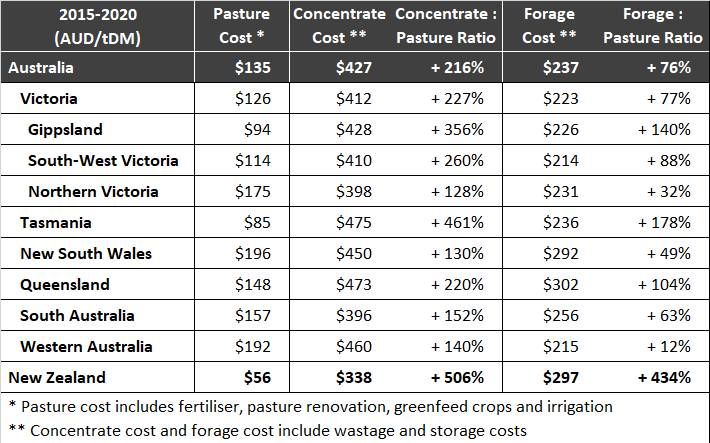 Concentrate cost ranges from about 130 per cent higher than pasture in northern Victoria to about 460pc higher in Tasmania.

So the causal reason why pasture harvest correlates strongly with profit is that pasture is the lowest cost source of feed by a wide margin, and with feed cost comprising 50-60pc of total operational expenses for an Australian dairy business, the impact of a low feed cost is that the cost of production is lower, which has a strong positive causal impact on profit.

The feed cost variances in Table 1 can also be utilised to quantify the impact of differing proportions of pasture to concentrates and forages in the diet.

What then is the impact of pasture percentage in the cows' diet?

The impact can be demonstrated through a simple mathematical equation as outlined in Table 2 for Australia. However, two calculations have been completed in the table; one where the pasture cost is held constant for all options, and the second where pasture cost is more correctly lower when pasture is a higher percentage of the diet.

The variations in pasture cost for differing percentages of pasture in the diet are based on statistical analysis of a large unbiased Australian dataset. Both calculations of average feed cost highlight the large negative impact on the total dietary feed cost as more supplement is added, and as pasture percentage is reduced.

The quantum of the impact of moving from say 70pc pasture in the diet to 30pc for the average Australian farmer is to increase the average cost of feed by about 50-60pc (from $190 to $305 per tonne DM based on a variable pasture cost).

Significantly decreasing the percentage of pasture in the diet, as the majority of dairy farmers in Australia have done in the past 20 years, effectively undermines the advantage pasture can deliver within a low cost of production dairy business.

This can be further demonstrated in Figure 1, which matches the diet average feed cost for Australian regions (and New Zealand) for the period of 2015-2020, with the average cost of production for each region. 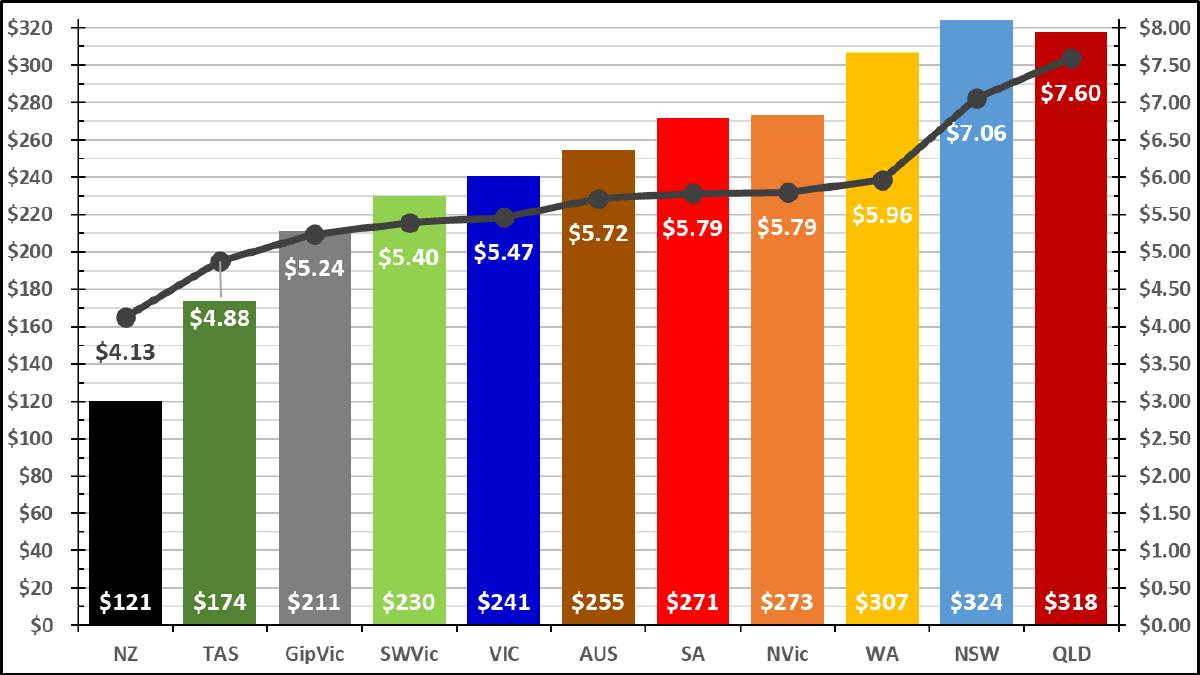 Perversely it can be argued that if farmers are going to have supplements comprise a majority of the diet, and pasture comprise a minority, then there is less reason for these farmers to focus on pasture harvest. Effectively the addition of large quantities of supplement averages up the diet cost and reduces the potential impact of pasture's lower unit cost per tonne dry matter on lowering the cost of production.

This is also why it is inconsistent for farmers and their consultants to argue on the one hand that pasture harvest is important to farm profit, whereas the percentage of pasture in the cows' diet (or the choice of production system) is not.

The causal correlation of pasture harvest with profit, along with the basic mathematical calculations outlined above, determines that any argument must be based on either both pasture harvest and pasture as a percentage of the diet being important for delivering a high level of profit, or both are not.

There is strong supporting evidence that pasture as a percentage of the cows' diet correlates with profit. There is also relevant practical evidence of this within the Australian dairy industry and internationally.

New Zealand and Ireland are countries that demonstrate the advantage of including a high percentage of pasture in the diet on cost of production and profit, whereas Tasmania does this nationally along with Gippsland as the next best exponent.

Another interesting aspect of the combined impact of pasture harvest and pasture as a percentage of the diet is that both have a significant positive correlation with lower labour cost and higher labour efficiency. Labour cost per kg milksolids comprises 20-25pc of total operational expenses for an Australian dairy business, and when combined with feed cost per kg milk solids, they comprise 70-80pc of total operational expenses.

This will also be essential if the Australian dairy industry is to regain its international competitiveness, along with regaining a comparative advantage to other land uses within Australia.