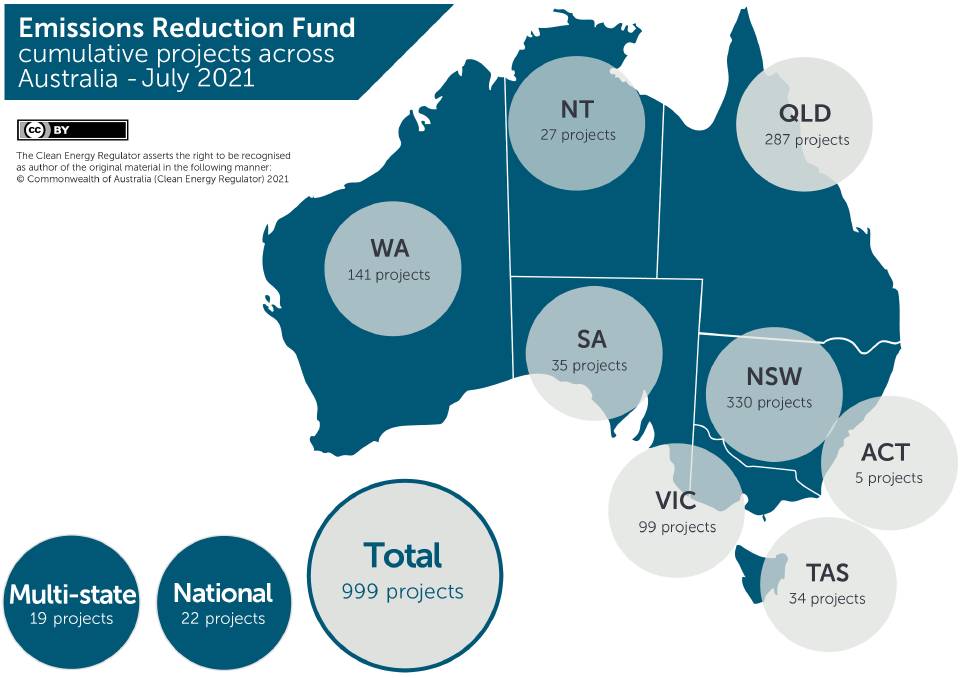 The banking sector has started to come on board with carbon farming in Western Australia.

Both the National Australia Bank and Rabobank said they were lending to customers taking on carbon projects.

STILL an emerging sector, carbon farming has been gaining traction in Australiaand it is now looked upon favourably by most banks.

According to the Clean Energy Regulator (CER), as at July 2021 there were 999 carbon projects across Australia.

What the banks think

Both the National Australia Bank (NAB) and Rabobank said they were lending to customers taking on carbon projects.

"The carbon farming market is evolving quickly, and we are supporting our customers to ensure they are aware of the opportunities and risks," said NAB regional and agribusiness banking executive Julie Rynski.

"Carbon farming can provide farmers with an opportunity to generate a secondary income stream, while they continue traditional farming practices.

"However, contracts often come with long-term commitments so it's important farmers fully understand how they will manage these obligations over the life of the project.

"When lending to farming businesses, we consider the income derived from carbon farming alongside traditional farming income streams in the loan assessment process."

Rabobank head of sustainable business development Crawford Taylor said the financial institution looked favourably on carbon projects as "they bring a separate income stream which adds initial benefit to the value of the property or business".

"We are lending to businesses that have carbon projects on their properties," Mr Taylor said.

"If they are an existing client and are approached by a carbon company, the bank has to agree to the project as the lender and look internally at the carbon credits that would generate from the project."

Established in 2008, it has more than 200 registered carbon projects Australia-wide, of which 20 are in WA, as it has been operating in WA for just over three-and-a-half years.

All of the company's work in WA is currently in the pastoral region and uses the human induced regeneration (HIR) method.

GreenCollar WA development manager Malcolm Gillett, who also farms in the Great Southern, said the project commitments required by pastoralists were different depending on the company they chose to partner with.

GreenCollar works on a 70:30 split, in favour of pastoralists.

While a 30 per cent cut of the ACCUs generated may be slightly more than other carbon companies, Mr Gillett said there were no other initial financial commitments for pastoralists, other than their own legal advice or a property valuation (if required by the bank).

"We carry the risk because we know our projects work."

He said that if a project with GreenCollar was unsuccessful at sequestering carbon, the only cost to pastoralists would be from the legal advice and property valuation they sought in the initial stages, along with the value of any labour they contributed.

"Some carbon companies work on a consulting basis and require a capital input from the landowner upfront, but we don't as the project is in our name," Mr Gillett said.

"Choosing the right provider is critical - look for longevity, how many projects they have and their financial backing."

The Emissions Reduction Fund (ERF) requires sequestration projects to choose a permanence period of either 25 or 100 years.

Obligations under the permanence mean the carbon stored by a project must be maintained for the chosen period, even once the vegetation has reached its full sequestration potential.

Those who chose the 25-year option will incur a 20pc reduction in the number of ACCUs issued for the project, which is to cover the potential cost to the government of replacing carbon stores after the project ends.

This is in addition to the risk of reversal buffer (5pc), which applies to all sequestration projects.

From the start of a contract, to when ACCUs are credited can vary between about 2-2.5 years.

Freehold properties or use of alternate methodologies may generate ACCUs on a shorter time frame.

Any project that is on pastoral land that has a native title determination requires consent from the traditional owners.

Mr Gillett said GreenCollar works with landholders to engage traditional owners in free, prior and informed consent, taking the time to educate all stakeholders.

"We help traditional owners understand the opportunities involved and the positive outcome that the condition of the country is improved by the projects," he said.

Mr Gillett said GreenCollar aimed for stations to still generate the majority of their income from livestock, with carbon farming improving the land and making properties more resilient.

"In two to three years WA has the potential to be the biggest carbon market in Australia," he said.

"It's a third of the continent and I believe that many pastoral businesses have the potential to benefit from a carbon farming project.

"In the long-term future, I believe that carbon farming will change pastoral businesses for the better - there might be slightly less stocking rates in some areas to allow the land to regenerate, but it has the potential to make businesses and rural communities more resilient and profitable.

"Then there's the potential of the broadacre region, which would take a different approach using different methodologies, such as soil carbon for example.

"In this instance it is about having more carbon in your soil, which ultimately benefits your operation by improving the health of the soil which leads to greater productivity."

GreenCollar is currently looking into potential projects in the agricultural region.

"We will partner with people who have agronomic practices that assist in increasing carbon in their soils," Mr Gillett said.

"If they want to improve the health of their soil, then generating ACCUs would be a bonus for them."

The story Interest in carbon farming is on the rise first appeared on Farm Weekly.