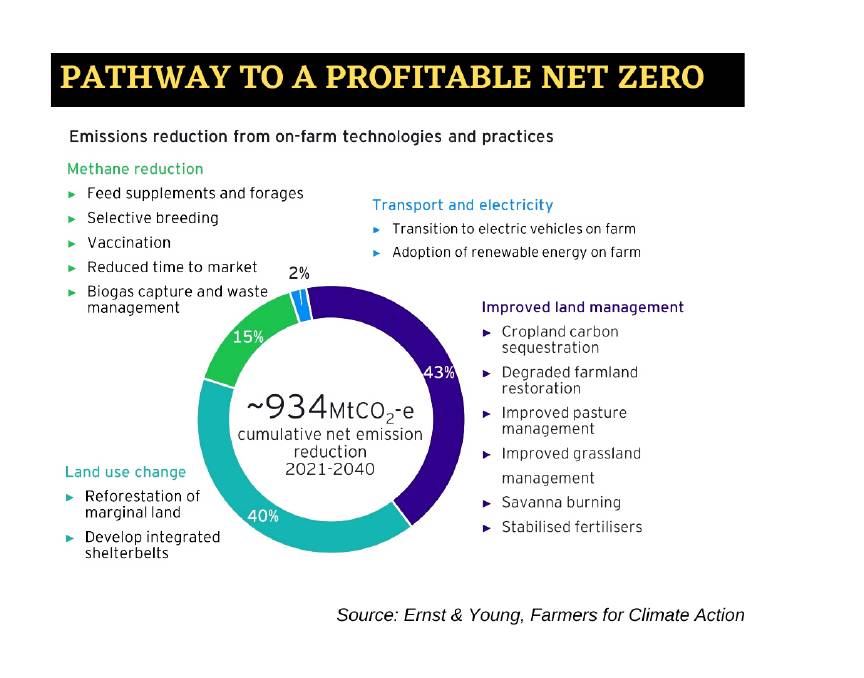 Land use change is the key to Australian agriculture achieving net zero by 2040, according to an Ernst & Young report released by Farmers for Climate Action this week.

In fact, half the emission reductions would come from land use change, another third from improved land management and 15 per cent from methane minimisation.

The report calls for about 3.9 million hectares of marginal farmland, an area more than half the size of Tasmania, to be reforested by 2040.

Rather than plantations, the reforestation would be with mixed native species not intended for harvest.

Another 1.9 million ha would be planted as integrated shelterbelts on productive land for wind breaks, shade and erosion protection on waterways.

But Farmers for Climate Action chief executive Fiona Davis says there is little risk of large swathes of 'lock up and leave' areas on farmland.

"The program is structured in the right way that I think we can feel confident this isn't going to lead to perverse outcomes and will actually benefit our overall landscape, and the profitability to Australian farms," Ms Davis said.

As with any other agricultural enterprise, she said, it was up to farmers to decide which land would be most suited to reforestation.

"There can be instances on lower productive land or by enhancing rangelands for example, with different management techniques that could have an emissions reduction benefit, an offsetting benefit and a production benefit, and that's the happy space for us," Mr Ragg said.

"If you're talking about locking up land, setting aside land planting thousands of hectares to trees, then that's not something we could support."

"Some of these technologies are not yet on market and will become more widespread in the near and medium term," she said.

Most were supported by the Federal Government's Emissions Reduction Fund and allow landowners to generate Australian Carbon Credit Units.

Mr Ragg said the embryonic nature of much of the carbon mitigation science meant it was too early to determine whether the plan laid out in the report stacked up from a practical perspective.

"The only thing we really clearly understand is veg carbon and the returns on those are marginal at best."

The high cost of establishing carbon projects and low carbon price made it difficult for them to compete with conventional agriculture for a place on the farm, Mr Ragg said.

"It's one thing to think about the carbon price, as per the ERF options, but that's a gross price that doesn't take into account the net return to the producer, which is typically somewhere in the region of half that carbon price because of the transaction costs of participating," he said.

Mr Ragg said the NFF itself continues to gather research and information to help producers better understand their options.

"We want to be part of the conversation but, equally, we don't have enough information yet to make those determinations," he said.

"In the context of the EY report, clearly it's a modelled report, and they've made some assumptions, some more agreeable than others, but it's a useful discussion."