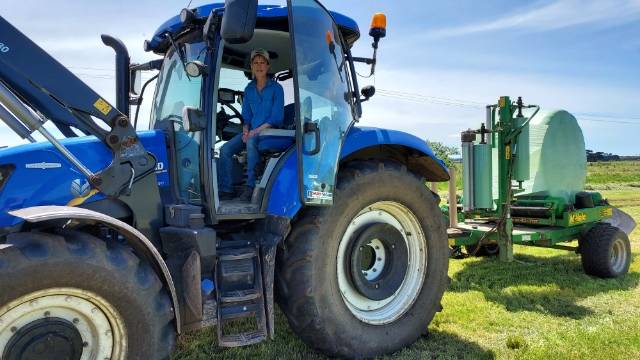 High rainfall is expected to lower the quality of some silage.

A dairy farmer in Victoria's south-west says her silage yields are down by 75 per cent on year-ago levels due to high volumes of spring rainfall.

The soggy conditions are making it almost impossible for some farmers to access paddocks as the clock ticks to harvest fodder at the right time less than a month out from summer.

Purnim dairy farmer Lisa Dwyer said the record rainfall had place a "profound impact" on her silage harvest to date.

"We're mapping out where the wet areas are and avoiding those areas and we haven't had to do that before," she said.

"In short, we're probably a quarter of the way through our annual silage harvest and normally we would be just about finished.

RELATED READING: Can silage be made from wet or pugged paddocks?

The nearest weather station at Warrnambool shows the region has received 800 millimetres since the start this year, including 180mm for spring.

"We've got an older milker who's in his 70s and he said to me about two months ago that it was going to rain every day until Christmas," she said.

"I laughed at him because we all know how quickly the season can turn but here we are in early November and the guidance has proven to be correct so far."

Farmers like Ms Dwyer say they are placing their faith in the Bureau of Meteorology, and harvesting as much fodder as possible in between the rainy days.

"We're still anticipating to do a lot more but we're also very aware that the quality of that silage isn't going to be what we normally have because the pasture is maturing everyday," she said.

"It's beyond its optimum cutting time."

The result of a slow silage harvest will require some dairy farmers to re-calibrate their herd's feed rations, forcing silage to be tested to determine how farmers will formulate their feed plans into the new year.

"It is quite a profound impact," Ms Dwyer said.

"It really comes down to the two critical elements; the energy value and protein value.

"If the energy and protein isn't at its optimum level in your home-grown conserved fodder, then you've got to make it up from other feed options which are typically much more expensive."

"We're not getting much of a spell between showers and while some of the quality is alright, we've also noticed some of it slip back a bit," he said.

"Some of it should have been cut in the last couple of weeks and that will impact quality.

"Usually it needs to dry up but we've only had two and three-day periods where we haven't had rain."

Meanwhile, in northern Victoria it is a different story, according to Tongala dairy farmer and Murray Dairy chair Andrew Tyler.

"We have had some rain events but nothing to stop us for more than a day or two and then we're back into it again," he said.

"I don't think the yields are as big as last year, but on visual appearance I'd be pretty comfortable to say quality is a lot better than last year.

"Last year we had huge crops and the weather was a bit tricky whereas this year we've had more rain events and crops matured earlier last year because we had a fairly strong early break."