Ten years ago, Tasmanian dairy farmer, Denise Suna, worried about the day she could no longer physically milk her herd of 180 Holstein-Jersey, Jersey and two-way cross-bred Jersey-Holstein cows. 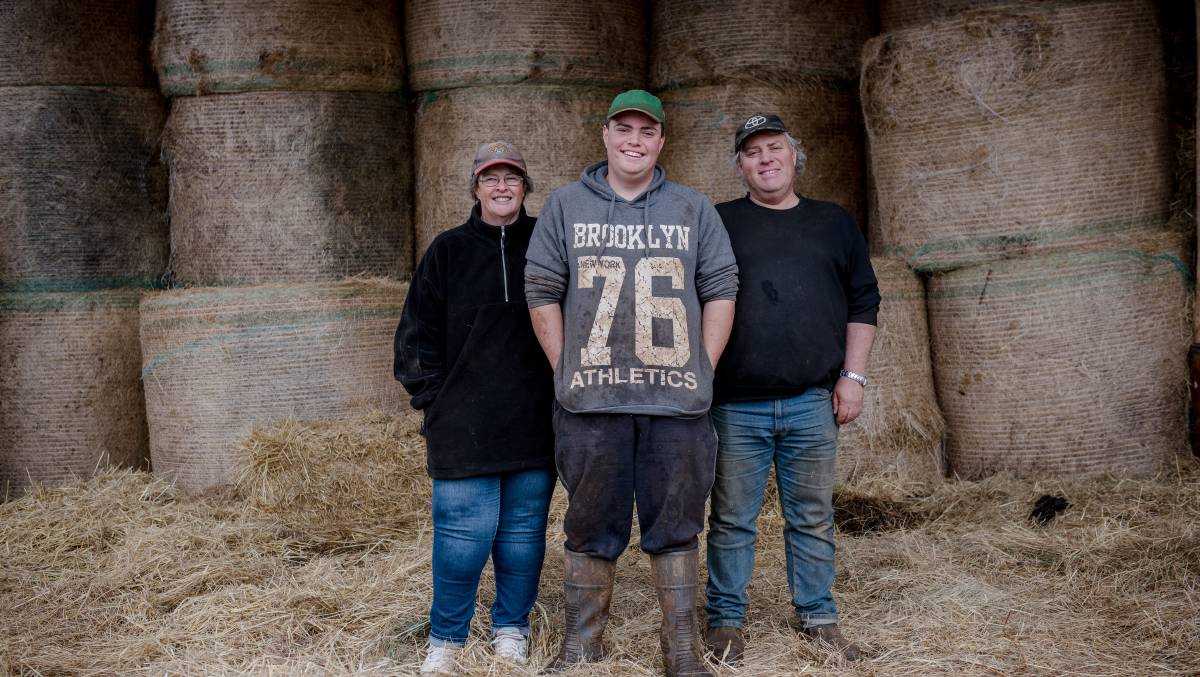 Ten years ago, Tasmanian dairy farmer, Denise Suna, worried about the day she could no longer physically milk her herd of 180 Holstein-Jersey, Jersey and two-way cross-bred Jersey-Holstein cows.

"I was starting to have a lot of trouble from my hands, I was struggling to put cups on and my arms and shoulders ached at night," she said.

"I could see a day where I just couldn't milk the cows any more. We also knew we needed a new dairy."

Despite her deep affection for her cows, Denise wondered if it was time to start considering another way to make a living. Alongside that decision, Denise and husband, Cameron, were facing a lack of succession onto the farm. None of their children wanted to milk cows in the 13-a-side double-up herringbone dairy, built in 1978.

On top of these considerations were the low milk price and, as a Fonterra supplier in Tasmania, additional business pressures.

On a family holiday to Europe, Cameron and Denise toured several automatic milking system farms in Holland. They visited New Zealand farms to understand how AMS worked in a pasture-grazing system.

"We also went to see a robot system at Western Creek (Tasmania) and we were impressed with how the cows used the system and were relaxed," Denise said.

"That's when we got really serious about changing to a robot system."

It required some considerable change to infrastructure and a significant financial investment: $1.2 million. A bonus was their son expressing an interest in working on the farm, attracted by the technology of the AMS.

The farm has a quarry and, using their own machinery, all the earthworks, concreting and cladding could be done by Cameron and their son, Dayne.

"We built a platform for each robot and we had to physically dig out a pit next to each robot so we can go down and look at each cow's udder from underneath," Denise said.

The old shed was 12 square metres; the new shed is 25m2. An underpass was built, at a cost of $120,000 for materials. Again, they used the farm quarry and their own earthmoving machinery.

The remaining herringbone system was taken out and the drafting yard was installed to enable the cows to go through the robots. The automatic drafting system scans the cow's National Livestock Indentification Scheme eartag and, if the animal needs husbandry or veterinary care, it is funnelled to pens or a waiting paddock next to the dairy.

"It means the cows are drafted into pens if they need AI or treatment," Denise said.

"If any one is lame, they are drafted to a paddock near the dairy, where they have pasture to graze and they don't have to walk."

The Suna family graze their herd on hilly countryside near the village of Wilmot in Tasmania. The geographic isolation means labour is limited. As well as Dayne working on the farm alongside Denise and Cameron, their daughter, Courtney, is available for tasks outside her own employment and family responsibilities.

Dayne works alongside Cameron, managing pasture and fodder and repairing machinery. He shares, with Denise Suna, responsibility for cow health and production.

"Dayne wasn't interested in milking cows through the herringbone system, but is very interested in the technology and mechanics of the robot system," Denise said.

"Dayne is very good with the cows too, which I really love."

The Suna farm lies across four properties in the Wilmot district - Brooklands, Bonness, Ormidale and The Valley - located both sides of a country road that is busy with logging trucks and farm traffic. The land is steep on both sides and the farm doesn't initially look like a place where cows might voluntarily walk themselves from far pasture into the shed for milking.

Brooklands is the home farm, where the dairy is located and carries the paddocks where the herd camps overnight. Bonness is the second farm, joined by the underpass. The milking herd walks through the underpass to graze on this farm during the day.

"We built a three-way grazing system across Brooklands and Bonness and we were able to put a single wire up the middle of each laneway to create an efficient system for grazing," Denise said.

Brooklands was bought by Cameron's parents when he was 16 and said he wanted to be a dairy farmer.

Ormidale and The Valley are runoff blocks, to grow out replacement heifers and dairy-beef-cross calves. It's also the country where they grow dryland and irrigated pastures and crops to make silage and hay.

Ormidale was Denise's parents' dairy farm. The total farm area is 250 hectares and the milking platform is 110ha.

"If there's surplus pasture on Brooklands and Bonness, that also gets cut as silage," Denise said.

The herd size was 180 cows when they were milked using the herringbone. To ensure a return on investment from changing to a robot system, Denise and Cameron made a long-term plan to grow the herd to 350 cows, milking with five DeLaval VMS stall robots. Four years after the four robots went in, the fifth has just been added as planned and the couple will have a herd size of 300 in 2020 and, plans going well, increase to 350 cows in 2021.

Production has grown, from 320kg milk solids per cow using the herringbone to 400kg MS/cow in the robot system.

The herd numbers have increased naturally, by keeping every cow and dairy heifer. This year, 90 heifers will come into the herd from August 1.

"We kept cows we not necessarily should have kept, but have," Denise said.

"Next spring, we'll have the heifers to replace those cows we want to sell.

"Some of the cows haven't got brilliant teat placement, so I have to help the robot system attach so she can be milked.

"If the robot is having trouble attaching, you can put the cow's milking time out by about an hour, so her udder is more plump and the teats are pushed apart a bit more. It's a huge learning curve.

"I still spend time with the cows. I still think like a conventional farmer.

"I still go along the laneway and look at the cows. I can identify if someone is lame, or might have mastitis, or isn't milked out properly. I could spend all day wandering among the cows if I had time."

These are issues that can be sorted when the cow comes into the shed for milking.

"I couldn't turn a computer on when we built the robotic dairy, but my son is very good and I can now do what I need to do on the computer," Denise said.

"I can put a track on a cow and when she comes into the dairy, she is scanned and the system sends a message to my phone and I can check on her in the dairy shed."

Decisions are now made using data generated by the robots, allowing for greater precision and accuracy in overall farm management.

The information captured by both the robots and a DeLaval Cell Counter allow Dayne to make cow health decisions often before animals are showing any symptoms of disease. There has been a drop in mastitis rates and the farm has been recognised with several milk quality awards.

The change in the cows' behaviour has been marked and the family has particularly noted how much calmer the animals are in the shed.

"Since we've put the robots in, we've noticed how incredibly clever the cows are," Denise said.

"I knew they were clever but you don't see it as much in a conventional system."

Robotic industry program Milking Edge project leader Dr Nicolas Lyons said there were currently 45 automated milking systems operating in dairy farms across every dairy region in Australia, with another two farms in the process of converting from conventional to robotic milking.

The project is a collaborative industry initiative involving Dairy Australia, NSW Department of Primary Industries and DeLaval. The team is building tools and resources to support industry participants to consider, invest and operate automatic milking systems successfully, as an important part of growing a healthy future for the dairy sector in Australia.

It builds on a decade of successful research and development led by FutureDairy and the experience of multiple commercial farms across the country to introduce proven technology to the industry.