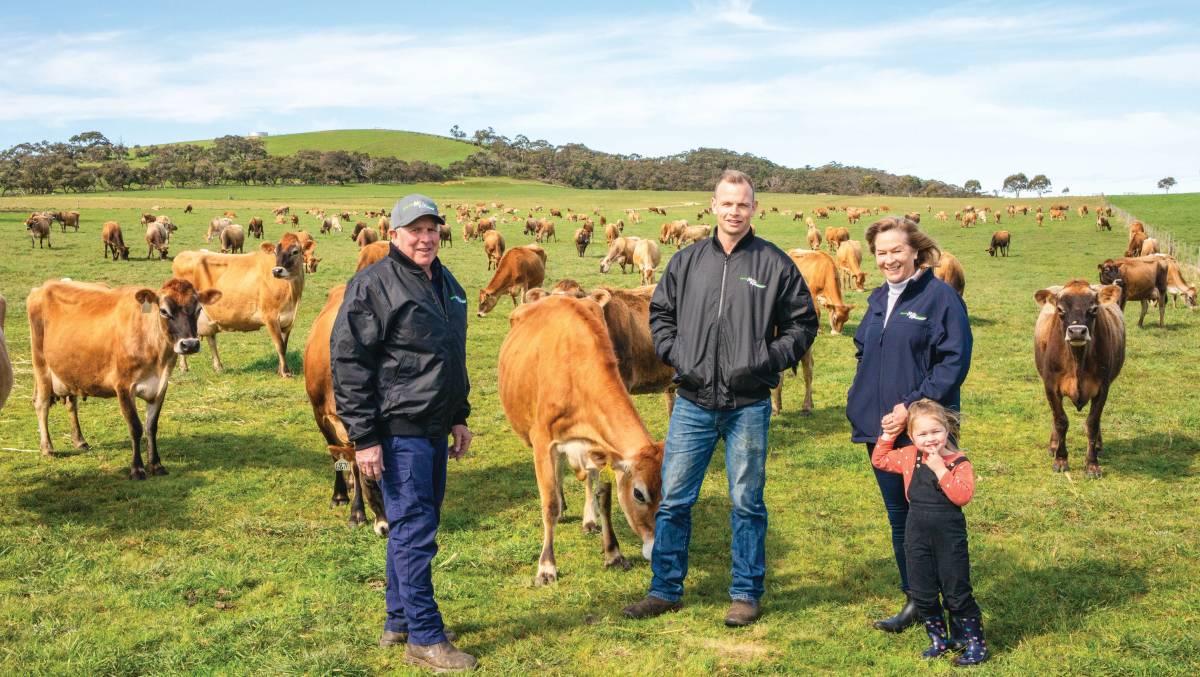 Jersey herds have proven successful for dairy farmers around the country.

Nick Brokenshire has always known the benefits of Jerseys - now his neighbours are discovering the secrets.

Nick milks about 400 Jerseys at Mount Compass south of Adelaide on the Fleurieu Peninsula, continuing a family tradition with his Amdena Jersey stud.

The cows suit his needs and his conditions and Nick has noticed a general shift towards Jerseys in the region.

"Around the area, people are starting to look more at Jerseys or cross-breds," he said.

"They're finding other cows are too big and don't like to walk. Jerseys are fairly agile and fit and they are better converters."

Nick recently disposed of his last handful of crossbreds and says his Jerseys produce what he needs.

"We believe that for their body weight they have better output and have fewer issues than other breeds," he said.

"They're good converters for what we put in," Nick said.

Graeme and his wife Lisa farm in Kangaroo Valley between the Southern Highlands and the south coast of NSW and wishes he had changed earlier to Jerseys.

"I've seen the benefits of the breed and what they bring to the table," Graeme said.

Influenced by Lisa, the swap started about 10 years ago and the herd is now 80-90 per cent Jersey.

"If you're going to be putting cups on cows, you may as well put them on cows that are going to be returning you the most and the Jerseys certainly do that in regards of their fat and protein percentage and their ability to get in and get the job done," Graeme said.

"They don't do 40-hour weeks and have a flexi-day every second Friday; every day 24 hours a day they want to work. I work like that and I want everyone around me and my cows to do the same thing and the Jersey breed certainly does that."

Geoff Heazlewood's farm is land-locked on three sides by the township of Latrobe and on the fourth side by the Mersey River on Tasmania's north-west coast.

With only 50 hectares at his disposal, Jerseys are the only logical stocking option.

Geoff and Anne and their two staff milk 200 Jerseys on floodplain alluvial country, and the river has a history of floods, most recently inundating the property in 2016.

"That's one of the main reasons we are Jersey," Geoff said.

"It's a small farm so smaller cattle suit it. Because it's floodplain, the smaller cattle don't tend to bog up the ground as much as the larger breeds."

Tim farms at Glamorgan Vale, about 60km west of Brisbane, and deals with temperatures from the mid-30s and up over summer, high humidity and low rainfall.

His herd of 160 includes 90 milkers and Tim says the Jerseys are "the most economic breed for our dryland farm".

"We wouldn't be able to justify the input costs of buying feed for another breed because you have to feed them a lot more to make the same milk solids," he said.

It's not just about the production costs; it's how much he gets paid for the milk.

"There are benefits from their fat and protein," Tim said.

"Some factories in Queensland pay a bit more for better quality milk and we're a lot higher than the base price because of the Jerseys."

The base price in south-east Queensland is 57.7 cents but the Beattie farm is getting 72.93 cents because of their high fat and protein benefits and a bonus quality payment.}

Darien Mathews grew up with Jerseys but his current connection to the breed runs a lot deeper than personal choice.

Farming at Dumbalk in south Gippsland on a leased property with wife Alexandra, Darien's 520-strong herd is 75 per cent Jersey along with some Holsteins and cross-breds.

"It's a personal preference because I grew up with Jerseys but we like their efficiencies and with their size, they're a lot easier to handle," he said.

"If I have a cow down, I can sit her up on my own easier than a Holstein, and when we look at the herd test, the amounts of solids they put out considering how much smaller they are means they're definitely more efficient."

"The Jerseys come to you and want to know what's going on, while the Holsteins stand at the back," he said.

However, it's their economic success that drives the connection.