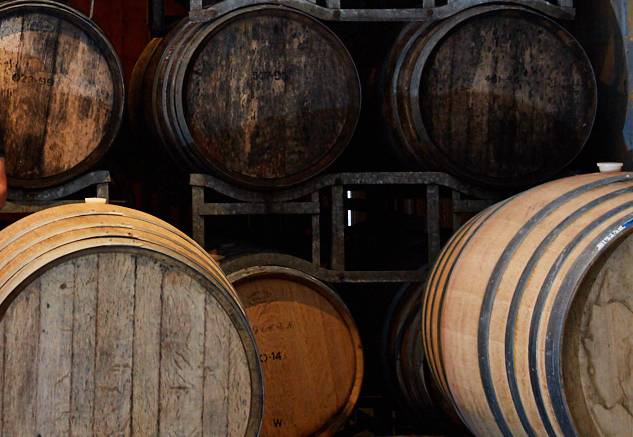 Australia sold more wine than it produced for the third year in a row last financial year, although a significant portion of those sales were to Chinese consumers now effectively banned from drinking our wine.

China's previous preference for our red wine, and an abundance of reds in storage, also leaves Australia with more red wines than white to find markets for.

After several droughty years, 2020 wine production shrank almost 10 per cent below the previous vintage, with the 1.52 million tonne grape crush - the smallest since 2007 - subsequently driving a temporary recovery in wine grape prices for growers.

While the current vintage harvest may change everything, total wine stocks-to-sales ratios fell to their lowest point in nine years in 2019-20.

Sales exceeded the volume of wine and other grape products produced by more than 60m litres.

The inventory of locally made wine at June 30 was estimated at 1.7b litres - down about 70m litres or 4pc on the previous year.

Wine Australia's latest analysis of production and sales data shows total wine production in 2019-20 was just under 1.1 billion litres, or 10pc less than the 10-year average.

Chief executive officer Andreas Clark said it had been a challenging vintage, with drought conditions affecting much of Australia and bushfires affecting a small number of wine regions,

However, quality was generally high in 2020.

Now, as wineries looked to divert exports away from China, which predominantly buys red wine, the challenge was to convert other markets such as the USA and the UK to drinking more reds.

These big export destinations traditionally have a higher demand for white wine.

About 60pc of Australia's total wine sales in 2019-20 went to overseas consumers, but they consumed about 9pc less than the previous year.

Mr Clark attributed the lower export sales to smaller Australian vintages in 2018 and 2019 rather than any notable COVID-19 pandemic related impact on overall sales volumes.

The pandemic's softening influence on overseas consumption was only felt in most countries during the last quarter of 2019-20. 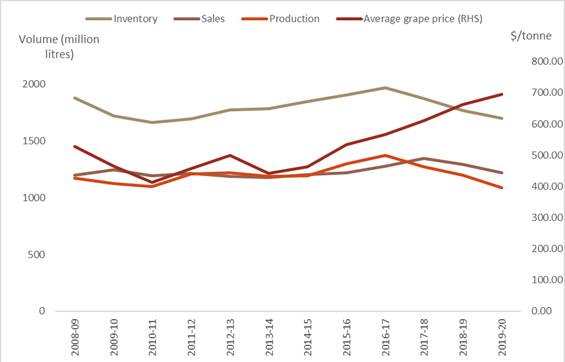 Domestic sales were down just 1pc, which was consistent with long-term trends of moderation and premiumisation in mature wine markets.

He said the past three years had seen generally solid demand clashing with falling production, leading to stronger wine grape and wine prices, "which is good news for growers and winemakers".

However, the reporting period preceded China's imposition of five-year 200pc tariffs on bottled wine exports introduced in November 2020, which has subsequently had a significant impact on the 125m litres a year once exported to that market.

Mr Clark said the survey results highlighted a significant challenge for the sector - balancing supply with the demand opportunities.

The reduction in Australia's overall inventory was mostly caused by a 100m litre fall in white wine stocks.

White wine's share of total sales has exceeded its production volumes for the past two years, leaving white varietal stock-to-sales ratios at their lowest point in a decade.

The total value of Australian wine industry sales in 2019-20 was $6.5b, with domestic consumers paying $3.6b of that figure - 3pc more than the previous year.

The story Aussie wine stocks down to nine-year low after low yielding 2020 first appeared on The Land.