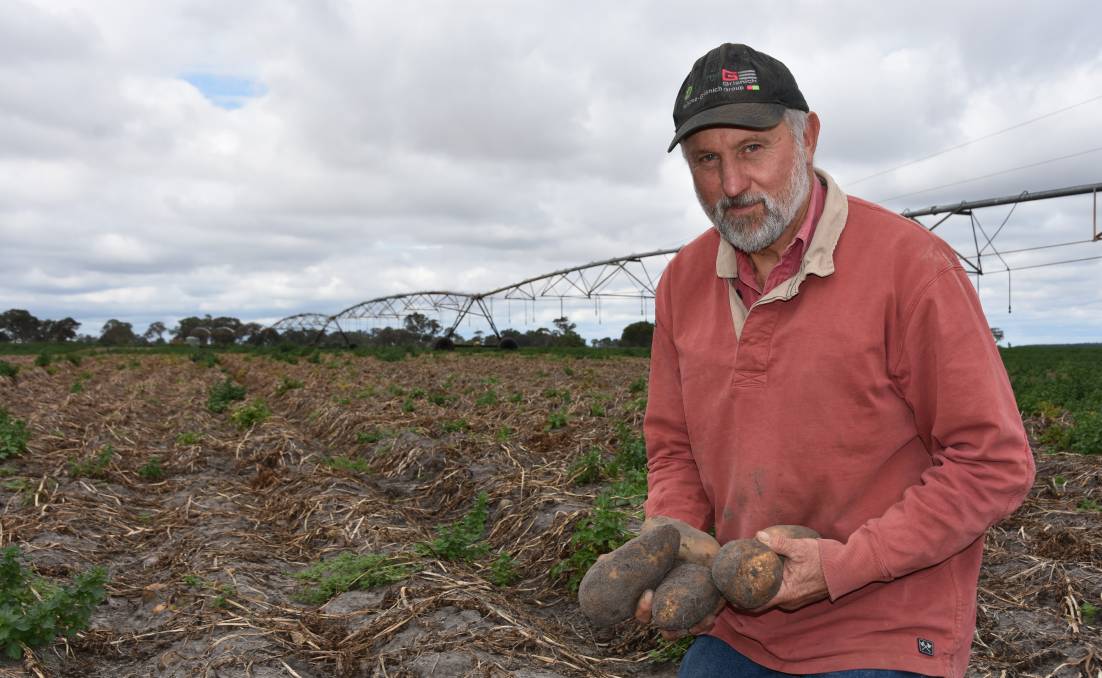 LONG OVERDUE: Mingbool potato grower Terry Buckley says a study into whether water from the SE drainage scheme could be returned to the aquifer is long overdue.

Representatives from the Limestone Coast's forestry, dairy, winegrape and potato industries have come together to see if they can find more irrigation water to expand their industries.

Representatives from the Limestone Coast's forestry, dairy, winegrape and potato industries have come together to see if they can find more irrigation water to expand their industries, or at least minimise cuts in the next review of the region's water allocation plan.

The newly-formed Primary Producers Sustainable Water Group is seeking funding for a Water Saving Strategy, including determining whether a percentage of the estimated 100 gigalitres a year of surface water discharged to the ocean from the SE Drainage Scheme could be returned to the lifeblood of the region, the fully allocated undergound aquifer.

The group says this would have multiple benefits, growing the economic prosperity of the region and also finding more water for environmental flows into wetlands.

The four industries - which collectively pay $4m a year in water levies-are seeking $130,000 -$150,000 to enlist SA hydrologist Glenn Harrington for a desktop study into the surface water flows, water quality and strategic points it may be suitable to put in weirs, wells or drain pools.

SA Dairyfarmers' Association's SE water representative Graeme Hamilton said there were many industries competing for water so they were faced with only two choices, finding savings through improved efficiency or a new recharge source.

"We can't wait any longer. People have been talking about using this drainage water for years, we need to either get on with it and see if it can be done or not, if it is the latter we can move onto finding the next option," he said.

"Because we have a robust water supply here compared to other farming areas, where their water is dependent on the river or dams, we can produce milk year round and keep processing going for short shelf life and the domestic market."

He is optimistic they will receive the funding and support of Environment Minister David Speirs, who has shown "more interest in the region and resource than some previous governments".

Limestone Coast Grape and Wine Council water representative and Coonawarra vigneron Peter Balnaves says some management zones in the Lower Limestone Coast Water Allocation Plan could face cuts into the future, so it made sense to see if they could be minimised while "sustainably managing" the unconfined aquifer.

But without a scientific study, he says it is difficult to say how this could occur, especially with the landscape changing considerably since the SE Drainage Scheme was put in.

"It would be a benefit to all to say where the best spots are to hold the water up and increase the recharge but whatever is done must be done very carefully so farmers are not inundated," he said.

"The total rainfall amount for the year is not that far off 20 to 30 years ago but when it falls is changing significantly, there is more summer rains and a lot more falls of 12 millimetres rather than 25mm or 30mm events."

THE Limestone Coast produces nearly half of the state's potatoes, but Mingbool grower Terry Buckley says the tonnages could be much higher if more irrigation water was available.

But he acknowledges other agricultural industries are all in the same predicament.

"There is no magic pot of water that can be divvied out to someone - for anyone to have more water someone must have less. We have to look at what we can do to increase the production or at the worst reduce the reductions," he said.

He says it is critical the Primary Producers Sustainable Water Group works together on water saving measures, including whether some of the drainage scheme water could be conserved at certain times of the year..

But, Mr Buckley believes it may not be as simple as drilling holes in the ground at strategic locations in the area and water may need to be pumped back in.

"It (the study) is in the interests of everyone in the region and for the public good so it should be public money finding it out," he said.

"Even if the economics don't stack up now it is still good baseline information to have for 10 years' time when food prices may have doubled."