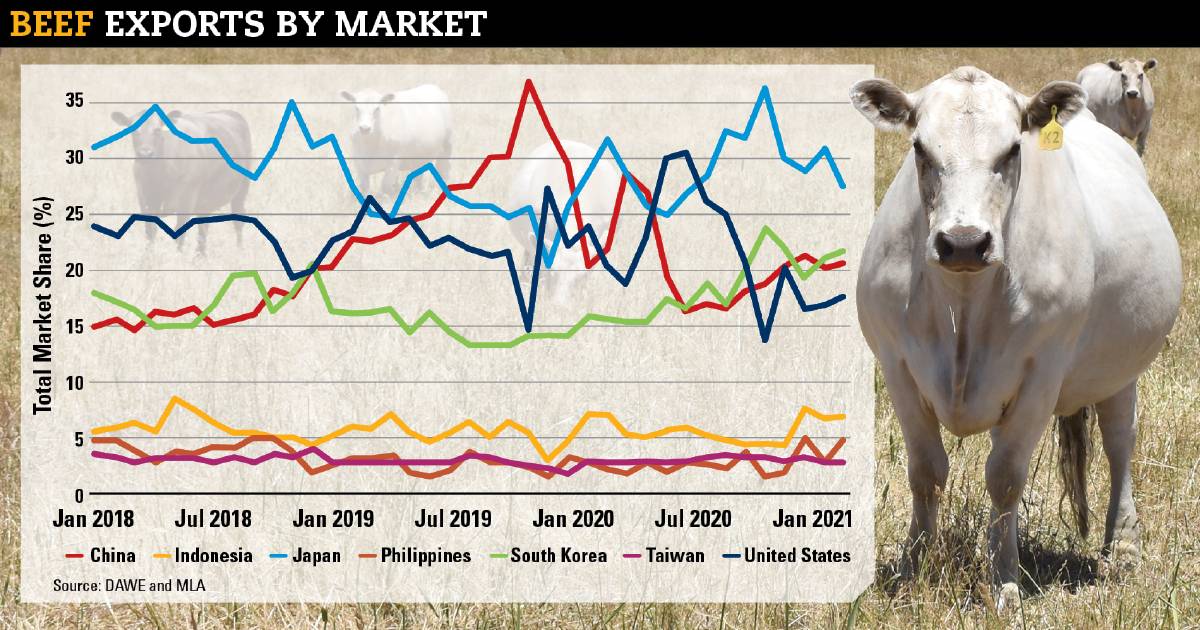 THE story with China in terms of beef exports is now more about expanding market share rather than simply regaining ground.

So says global meat market analyst Simon Quilty, in the wake of economist discussion around the idea that China's aggressive trade tactics have not affected Australia nearly as much as anticipated.

Despite the fact eight red meat processing plants remain shut out of supplying the Chinese market, for various reasons ranging from COVID-19 outbreaks last year to labelling issues and residue detection, volumes of exports being shipped are only running 36 per cent behind year-ago levels.

That's not as significant as the decline in Australian beef exports to the United States, which are down 44pc.

In fact, it is considered a solid result given the huge production decline due to the herd rebuild.

Furthermore, while volumes were down to China last year, chilled exports actually increased by 9pc.

As Australian plants were banned, others stepped up and doubled shifts and the end result was strong utilisation of what capacity exists to supply China, he said.

However, having more plants that are approved for exports to China needed to be the game plan going forward, according to Mr Quilty.

"It's clear that China is going to be absolutely critical to global meat exports for at least the next 20 years," he said.

Indeed, bids from China on the global meat market were now starting to move up, Mr Quilty reported.

"The losses appear significant from the second wave of African swine fever moving through. Some say this wave could be worse than the first one, which saw 50pc of hogs in China lost," he said.

"The dynamics are all pointing to the need for all protein from China being very high for years to come."

And while the US has indeed displaced Australian chilled grainfed beef in China to some extent, that was not necessarily detrimental, Mr Quilty argued.

"Today, it's roughly split 50:50 between us and the US, where once we almost entirely had that market to ourselves," he said.

"However, at a time when Australia's supply is limited, US product is helping to grow this segment, and Australia will be a beneficiary of that in the future."

All the Australian plants that have been suspended have provided documented evidence to Chinese officials of measures taken to overcome concerns and are awaiting a response, according to peak representative group the Australian Meat Industry Council.

AMIC's Patrick Hutchinson said all the suspensions were run-of-the-mill occurrences in global beef and sheepmeat trading but what was different was the time taking for the process to be worked through.

Rabobank believes exports of chilled product to China are likely to increase in 2021.

The big agribusiness bank's latest Beef Quarterly says even as pork production picks up in China, beef will feel less impact than other proteins given increasing consumption and restricted domestic beef production growth.

Most analysts believe Australia's overall beef exports to China will still be back this year, given the low turnoff of cattle, although Queensland's Ken Wilcock points out China imports of Australian beef nudged 15,000t in March and need only to average 16,500t per month across the year to better the 2020 volumes.

Meat & Livestock Australia's in-country manager Joe Zhu said the decline in volumes from Australia last year was consistent with other countries and more likely the result of the supply side here.

He said last year, China's total imports of meat grew at 60pc and that trend was expected to continue given the country has recovered strongly from the pandemic and imports were trending upwards in first couple of months already.