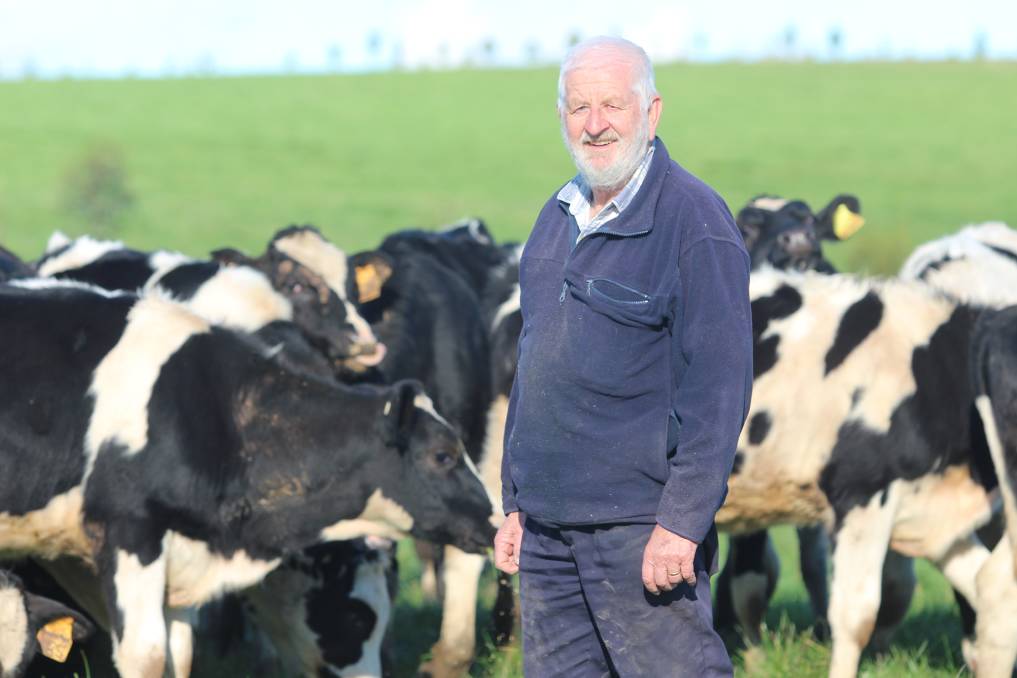 Les White uses genomic results from young calves to confirm their parentage and make early decisions about which calves (male and female) to keep and which to sell.

Les White has used genomics to cull the bottom 10 per cent of his family's dairy herd for the best part of the past decade.

Making accurate breeding decisions doesn't have to be hard work.

The Leongatha South dairy farmer has used genomics to cull the bottom 10 per cent of his family's dairy herd for the best part of the past decade.

He also uses the technology to verify the parentage of calves - to avoid any "mix-ups" in the calving paddock - and to also accurately identify sires used in the family's artificial breeding program, as they always inseminate embryos with two semen straws, from different sires.

For Les, the information generated by the DNA derived from a calf's ear-notch has taken any guesswork out of breeding decisions.

"It makes things so easy to keep improving your herd," he said.

"The decisions are easier; they are virtually made for you, or they are staring you in the face. All you have to do is make it happen."

This past year, the Whites used genomics to decide which heifers to export.

Those with the lowest Balanced Performance Index (BPI) - an independent breeding index developed by DataGene - are targeted for sale first, followed by heifers with the lowest breeding values for udder traits and fertility.

Picking heifers to sell hasn't been an easy task though, with the White family's Dilee Holstein herd improving all the time thanks to genomics - and their increased use of sexed semen means they have more to choose from.

It's a similar story with choosing herd bulls to retain for sale to local farmers.

Les said genomics has enabled them to choose bulls earlier and with greater certainty about their future potential.

Holstein Australia requires all Holstein bulls sold for use in dairy herds to be genomically tested.

Although many of Dilee Holsteins' clients don't ask for the genomic results, according to Les, having the information reassures him that he's selling quality animals.

"The good ones on genomics, they will be good once when they come in the herd," he said.

The Whites are particularly excited about the prospects for two heifers who have the highest BPIs their herd has ever recorded.

The heifers were born in January and March 2021, both Pembertons out of a Silverline.

According to genomics, one has a BPI of 489, and her full sister has a BPI of 501, putting them in the top 1 per cent in Australia.

Les, his wife Dianne, son Russ and his wife Amy were early adopters of genomics.

According to Les, the decision to implement the technology nearly 10 years ago has made some on-farm jobs easier.

Especially since the herd has grown to 340 cows.

It's now a routine practice on the farm, to sample calves at a few days old.

"Although we don't really need to know who a heifer is out of for a while, same for a bull as we don't sell them until they are 18 months old, genomics picks up the parentage quickly," he said.

"In the calving paddock, you always get mistakes, but we didn't realise how many parentage mistakes we made until we did genomics."

A big game-changer for Les has been the move from using animal's tail hairs for genomics, to taking an ear-notch sample.

He first saw the new way of taking a DNA sample while on a Holstein Australia sub-branch tour.

"The punch-hole is the best thing ever invented," he said.

"We do them when they are born, so a group about every four to five days, it's extremely easy. It's much easier than an ear tag because it is a lot smaller hole."

After more than 60 years of milking cows, Les remains impressed with the rate of technological and genetic gain available for farmers willing to invest in the newest science.

He said industry breeding has evolved considerably - particularly in the past 15 years.

While these improvements have helped the bottom-line of his family business, he didn't want to guess what the future would hold for his 22-year-old grandson Rhys who recently joined the family business.

Rhys is the sixth generation to milk cows in South Gippsland, and Les said his grandson had stepped into the industry at a time of huge progress through increased knowledge and technology.

"I really don't know what the future is going to be, the number of changes that's happened over the last 20 odd years, what's going to happen in the future I wouldn't want to guess," he said.