ANYONE who’s ever organised a wedding will appreciate just how much work is involved and even more so when the event is being held on an isolated property 125km from the nearest shop. With not a wedding planner or function coordinator within a very loud coo-ee, everything from hairdressers to coldrooms has to be shipped in for the occasion. 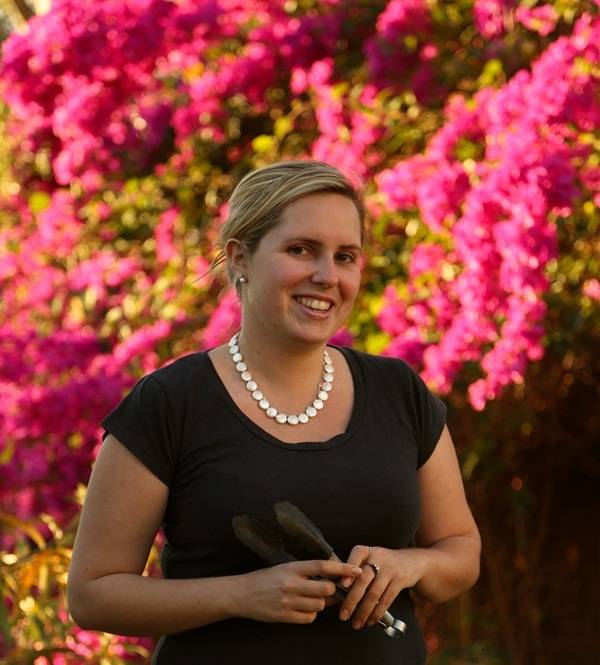 Sally Watts, the food magician at the centre of Chilli Peacock.

ANYONE who’s ever organised a wedding will appreciate just how much work is involved and even more so when the event is being held on an isolated property 125km from the nearest shop.

With not a wedding planner or function coordinator within a very loud coo-ee, everything from hairdressers to coldrooms has to be shipped in for the occasion. The only thing that didn’t need to be imported when Angela Atkinson married Alex Stirton on Saturday September 29, was the backdrop.

Veiled by a curtain of mulga trees, the garden at Armoobilla, Cheepie, the home of Alex’s parents James and Susanne, is a peaceful palette of colour splashed green; an oasis in the surrounding red landscape.

Such an undertaking is not for the faint hearted but it does strengthen the ties between family members and friends as everyone hops in and helps.

Lots of aspects at any wedding can and will be managed well ahead but the deal breaker is the catering.

Assuming the bride looks beautifully relaxed and happy (she did) and the guests have plenty to drink (they did), fabulous food will ensure a successful event.

Thanks to Chilli Peacock, so it was, at the wedding of Alex and Angela.

Sally Watts is one of the fifth generation of a well known, Quilpie district pastoral family and despite venturing east for schooling and to undertake her chef’s apprenticeship, her heart is firmly planted in the outback.

While she has been governessing for a local family in recent years, she has also been offsiding for her parent’s, Anna and Duncan Watts, as they have catered for a variety of functions around south west Queensland. Sally has now taken over the business, rebranding it Chilli Peacock.

Sally and her partner, Andrew Hughes, live on a sheep and cattle property 110km south of Quilpie.

While Andrew is steadily building himself a reputation as a photographer, Chilli Peacock is Sally’s foray into off-farm business.

“I just love cooking” she said, explaining her decision to launch into her own catering venture.

“I need to work and it makes sense for me to expand this business. Just because people live in isolated locations, shouldn’t mean they can’t have access to the best services. That’s what Mum and Dad provided as caterers and I want to build on that foundation. They live on another property east of Quilpie so we all understand the logistics of catering a long way from town. It’s not easy; you just have to be really well organised and keep very good lists.”

For the Stirton wedding, Sally had several conversations with Ange in the months before, offering a wide range of choices before they settled on a Mediterranean theme for the mouth watering canapés which were served on the western lawn in the glow of a glorious sunset.

As darkness enveloped the garden, the 120 guests meandered around to tables set on the tennis court where Sally and her team quickly served up platters of piping hot roast meats served with crispy, roast vegetables and warm roast pumpkin and baby spinach salad.

Choosing to source the bulk of her raw material in Quilpie, about 850km west of Brisbane, Sally buys all of her meat from the Quilpie Butchery and most of her grocery items from Paulsen Bros Supermarket.

“There are a handful of specialist ingredients that I have to get from Brisbane but most things Paulsens can and will get in for me. I just need to make sure I have the orders in to both them and the butcher a couple of weeks ahead of the function.”

Andrew was the official photographer for Alex and Angela, precluding him from helping Sally but her parents were happy to pitch in.

“We generally know someone in the area we are going to so I will ask them to help me find people who can help on the ground. We were lucky at Armoobilla to have friends who could help as it was quite a busy weekend. There was a race meeting at Quilpie and camp drafting in Charleville so a lot of people had other obligations. In future, if Andrew is free he’ll help me but,” she adds, eyes twinkling, “if he’s taking photos, I’ll call on Mum and Dad.”

Considering her location, one might imagine she’d stick to south west Queensland but she’s determined that people in the outback should be able to access fabulous food and service for special events.

“Distance is not an issue. We have the infrastructure to go anywhere and we’re used to long distances.”

She grins, “You know; have oven, will travel!”