THE first steps towards commercial production of the carbon-fixing soil improver, biochar, have been made through a joint venture involving a NSW mixed farming enterprise and a Queensland energy equipment manufacturer. 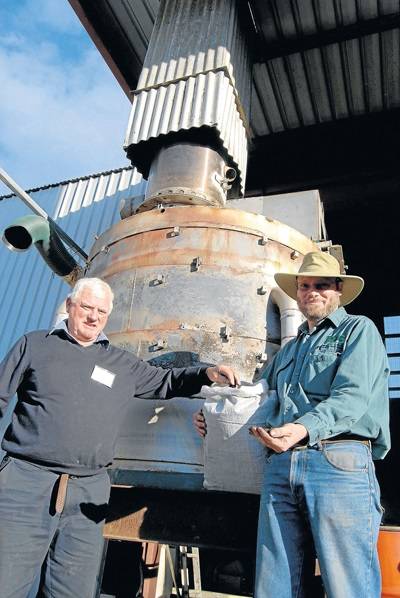 THE first steps towards commercial production of the carbon-fixing soil improver, biochar, have been made through a joint venture involving a NSW mixed farming enterprise and a Queensland energy equipment manufacturer.

The Larsson family’s Mara Seeds west of Casino on the North Coast, and Mackay-based BiG (Black is Green) will run trials using materials such as crop residues, timber plantation thinnings and green waste from councils to make biochar for application to crops such as soybeans, winter cereals and pastures.

Mara Seeds wants to establish the cost structures of biochar (charcoal) production, identifying inputs that work best and are readily available and whether large-scale production is economically viable.

“Biochar will be applied to crops at various rates on a broadacre basis for the next few years and the results collated in an attempt to establish its worth in a cropping and livestock system,” said Mara principal, Stuart Larsson.

Three tonnes of biochar is equivalent to approximately one to two tonnes of fixed carbon, according to BiG’s James Joyce, whose company is also committed to supplying biochar to a big fertiliser distributor.

“When applied to the soil each tonne of fixed carbon can lock up the equivalent of 3.7 tonnes of carbon dioxide for hundreds of years,” Dr Joyce said.

It takes waste products and creates a beneficial product for farmers that at the same time locks carbon for a very long time,” Mr Larsson said.

“That’s the simple part. What is more complex now is pinning down the product’s value – physically and financially – to farming systems and whether producing biochar is commercially viable.”

Markets for the product would be determined by the price at which it could be offered and the uptake of sustainable farming practices based on soil health.

The project will be based at Mara Seeds’ industrial site near Bonalbo, where BiG has set up one of its biochar processing machines, a continuous retort it believes is capable of turning off biochar at a rate of 200 kilograms an hour.

BiG’s main focus has been on the technologies which take waste products through to energy, but it was already producing significant amounts of biochar as a “commercial demonstration”.

Dr Joyce said there were thousands of potential commercial uses for charcoal, but his company focused on its use as a soil improver and fossil fuel replacement.

“Given Australia currently emits 450 million tonnes of CO2 each year, we could offset all our emissions by applying about 300m tonnes of biochar to 500,000 square kilometres of agricultural lands,” BiG’s website argues.

That statement represents an extreme example and would require virtually all the biomass Australia generates to be turned into biochar, but according to Dr Joyce it demonstrated the potential of the product.

“In our project, Mara Seeds will source a variety of feedstocks so they can crunch the commercial numbers and determine what is possible and what is economically viable,” he said.

Mara Seeds has long been at the forefront of sustainable farming practices, using a self-developed method of “softer farming” to produce grass seed, oilseed, cereals and organic yearling beef.

In recent years, the business has offered for sale organic compost and compost tea and opened a distribution outlet in Sydney.

Mr Larsson said collaboration with BiG evolved because he had tried to obtain biochar for use on-farm only to find he couldn’t purchase it in quantities he required.

He also saw further commercial potential from producing biochar himself through harvesting gas emitted from the biochar making processes.

“We could use it for drying hay.”