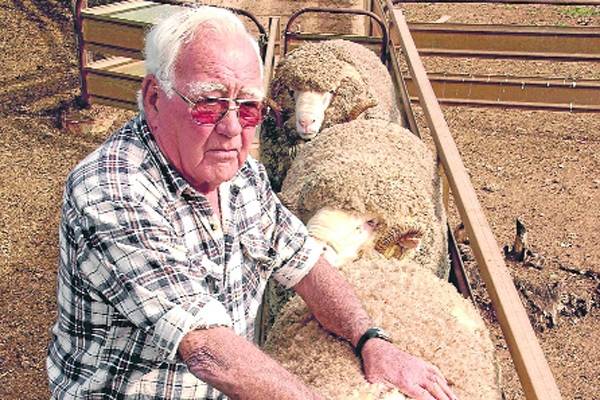 John Coy has left a “wonderful legacy of knowledge”.

IN THE fiercely competitive world of Merino sheep breeding and classing, there are few men who enjoy the universal respect of their clients and peers. John Coy was one such man.

IN THE fiercely competitive world of Merino sheep breeding and classing, there are few men who enjoy the universal respect of their clients and peers. John Coy was one such man.

Mr Coy, who has died at his home at “Montrose”, Dubbo, aged 79 after a stroke, was one of Australia’s best known, most influential and widely travelled sheepclassers.

He was also a born educator, communicator and thinker, who was expounding his often radical views about wool production and sheep breeding decades before they became mainstream.

In the words of Lou Armstrong of “Pemcaw”, Dunedoo, president of the NSW Stud Merino Breeders Association, Mr Coy was a man who will be “sadly missed, but he has left us a wonderful legacy of knowledge”.

Although retired in recent years, he retained a core of long-standing stud clients and was often to be seen at ram sales, tendering advice.

Mr Coy’s father was incapacitated by gas exposure during the First World War and on his return drew a block at Beckom, where his son spent part of his childhood.

John Coy later attended Sydney Grammar School before starting his Merino career at Haddon Rig stud at Warren, where his father secured him a job as a jackaroo.

Here he came under the tutelage of the legendary Haddon Rig manager, Sir Alex Ramsay, whose instructions from John’s father were to “keep him there until he learns enough to get a good job” – and this would be as an overseer at “Bairnkine’, Walgett.

In the late 1950s Mr Coy got his break when he was appointed stud sheep advisor for the wool firm, Winchcombe Carson, and began honing his skills as a classer.

He soon persuaded the company his time would be more valuable to it working in a classing race than driving a car, so they provided him with an aeroplane.

So began his long association with aircraft that spawned a host of stories often retold by his white-knuckled travelling companions.

A former workmate, Stuart Hodgson (who delivered the eulogy at Mr Coy’s funeral in Dubbo last week), told of the time a client quizzed the pilot about a coloured patch on the aircraft wing.

“John replied nonchalantly that he had hit some gum suckers up at Claude Bowhay’s place at St George (Queensland) which had made some nasty holes, so they got some tea towels and tape and patched them up. They were doing the job, so he left them there.”

When Mr Coy gave up flying in 1982, having “worn out” five light planes, he took to the road in a Subaru Brumby which became his trademark, helped along by a Subaru advertising campaign.

He was best known for his partiality for big, bulky sheep with soft-handling wool – a type he first saw, and made his beau ideal, at “Wonga”, Jerilderie, where he came under the spell of one of Australia’s greatest studmasters, Tom Culley.

In an interview with The Land in 2007, Mr Coy named Culley as one of his Merino industry “heroes”, along with Wilf Pennefather (Wonga classer), Ramsay of Haddon Rig, Art Collins of Collinsville and Claude Bowhay of Buckinbah.

All these men, he said, had that rare ability to “read” animals, and an instinct for mating one to another to get a desired result.

As well as learning practical skills from gifted sheepmen, John Coy took on board what science he could from CSIRO researchers whose views he respected.

He also read widely, and often put his theories into practice with experimental matings on his own farms: first, “Pine Glen” at Wellington, and in later years, “Montrose”.

At a time when the mixing of Merino bloodlines was considered little short of heresy, he introduced outside strains to many of his clients’ flocks if he saw need for directional change.

He earned the opprobrium of some of the best-known NSW studs by introducing longer-stapled, plainer-bodied South Australian rams to many western NSW and Queensland flocks.

He also predicted rightly, as far back as the 1960s, that wool would one day become a by-product of the meatsheep industry, and never neglected frame and carcase traits.

An enduring genetic legacy is the Manderley Purple family that found its way into so many stud pedigrees from the former Manderley stud of Ted and John Williams at Cooma, which Mr Coy set up in 1957 on a Wonga base.

He is also credited with having introduced through client studs in the 1970s the concept of on-property ram sales to NSW, having seen their success in West Australia.

He had an engaging, laid-back manner and droll sense of humour which belied to some extent a lifelong passion for his industry.

Mr Coy is survived by his partner of 10 years and lifelong friend, Enid Capell, sons David and Robert, and a daughter, Mary-Jane (Seaman). His wife, Margaret, predeceased him in 1998.