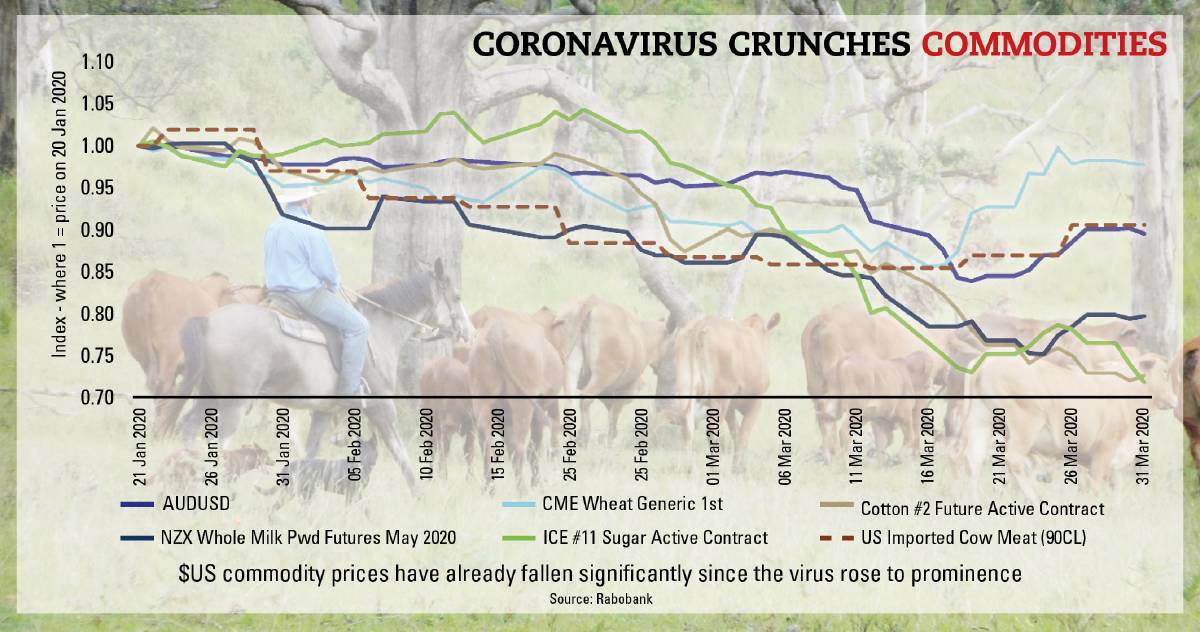 Despite being well positioned to weather the COVID-19 storm, Australian farmers should brace for a likely demand slump as local and overseas consumer incomes fall

Despite being in a good position to weather the COVID-19 storm, Australian farmers should brace for a likely demand slump as local and overseas consumer incomes fall and market disruption leads to commodity stockpiles and price uncertainty, according to global agribusiness lender Rabobank.

"Australia's agricultural sector is overall positioned for a profitable year, but we expect US dollar prices of most ag commodities to fall further between now and July," said Rabobank's research head, Tim Hunt.

Although panicked shoppers and recent rain had triggered a five per cent jump to a new high on Rabobank's Australian Rural Commodity Index in March - about 30 percentage points higher than a decade ago - agribusiness prospects faced "significant challenges" from a global economic downturn and pricing pressures.

Fortunately, wine's hit was not as bad as first feared, wool processor activity was reviving and tumbling sugar prices should also regain ground.

At the same time favourable seasons and strong producer demand were pumping up domestic beef prices, while the global grain trade was experiencing its own "toilet paper rush" sending forward prices for APW wheat above $410 for late 2020.

The trade was responding to nervousness about key ports in Argentina and Brazil being disrupted by coronavirus consequences, and export restrictions were mooted in the Black Sea region after dry and frosty weather setbacks.

Mr Hunt said the farm sector was lucky to have several other factors in its favour, cushioning the negative economic impacts of the pandemic in coming months.

These included a low Australian dollar, which Rabobank tipped to sink as far as US55 cents by June and to remain lower for longer than it did during the global financial crisis, even with a "partial recovery" in the second half of 2020.

The currency's export-friendly trend, down about 11pc or four cents in March, would be welcomed by most farmers, particularly as it was also lower against most of our farm export competitors.

The Aussie dollar had also tracked along similar lines to the Trade Weighted Index, which suggested export buyers continued to afford our products.

Although oil import costs would lift because of the low exchange rate, historically low global demand for oil was expected to keep fuel prices under pressure.

Meanwhile, after several years of drought had diminished grain stocks and sheep and cattle numbers, local farmgate prices were being supported by upbeat seasonal expectations.

"This is ensuring strong competition in the local market from processors downstream," Mr Hunt said.

Our biggest export consumer, China, appeared to be in the early stages of recovery, too.

However, the rest of the world was now falling ill.

"Global demand will likely weaken significantly in coming months as panic buying for food and groceries fades and the negative impacts of reduced incomes across most of the world come to the fore," he said.

"In global ag markets, supply typically fails to adjust quickly to negative demand shocks, resulting in a build up of inventory.

"We expect this will see significant US-dollar price falls as a result, given the size of this demand shock."

The current weather outlook also suggested Australian farmers would have a decent production season this year.

In dairy, Mr Hunt said a dry end to the 2019-20 season in New Zealand would reduce global supplies, but a significant global consumption pullback was still expected and production in many key export regions was leading to a slow build up in exportable surpluses.

Lower oil prices and slower economic conditions were likely to have a large impact on Australian lamb exports given its premium market status and its key export buyers were in the Middle East, the US and China.

Food service disruptions in China and the US could be significant, with total export volumes sold to China down almost 30pc in January and February and sales of lamb into the fine dining market in US likely to continue to struggle after an 8pc demand drop across the US market in March.

Other downside risks from COVID-19 disruption on several fronts included the availability of crop chemicals and farm labour as well as the continuation of operation of packing houses and processing plants.

Mr Hunt said the potential of re-infection in China, a global economic downturn that was much worse than the global financial crisis and high virus infection rates in regional Australia were also potential pitfalls for the sector to be prepared for.