Matthew Coddington from Roseville Park thought he was posting a pretty mundane video and one that would be lucky to get 30 'likes' on Facebook, he soon discovered how wrong he was.

In what Matthew Coddington from Roseville Park Merino stud thought was a pretty mundane video and one that would be lucky to get 30 'likes' on Facebook, he soon discovered how wrong he was.

On May 12 this year, as he had done every six months for the past 12 years, he was grading the internal roads of his 3200 hectare property "Glenwood" 30 kilometres south of Dubbo in NSW and decided to take a 20-second-long video through the back window of the tractor of a converted old bull dozer track being towed along the dirt roads to smooth out the track to reduce the wear and tear on the farms' vehicles.

It had been a couple of days since he had posted anything on the Roseville Park's social media sites, and being in one of the few spots on the farm that had mobile phone service, he decided to upload the video and added a short comment, "grading the road at 7.5km/hour with these old dozer tracks."

He posted the comments and video on Facebook, Twitter and Instagram and did not think anything of it, not expecting to get much reaction to the video, or the comment and continued on grading the roads on the farm.

Roseville Park's Facebook followers jumped from 3000 to 5000 in one day.

Matthew was contacted by a US based company called Viral-Hog who wanted to licence and manage the 'viral' video and collect royalties.

The Australian representative of Viral- Hog, Dave Stevens had to admit that he did not understand what all the fuss was about and said that he had scrolled through the video when he had first seen it.

Nevertheless, he had to admit that Australian and American farmers could not get enough of it.

Comments from Americans came in like, "He's an Aussie farmer! He probably lives in the outback. Anything goes out there!" and, "Darn, my dozer has rubber tracks!"

There were also recommendations to Matthew to patent the idea, but the original idea was copied from a set of dozer tracks set up just the same when he was buying an Angus bull from the Noonie Nyrang Angus stud in 2008 which was then owned by the Homes family and now owned by fellow Merino stud breeders, Tony and Penny Inder who own the Allendale Merino stud at Wellington. 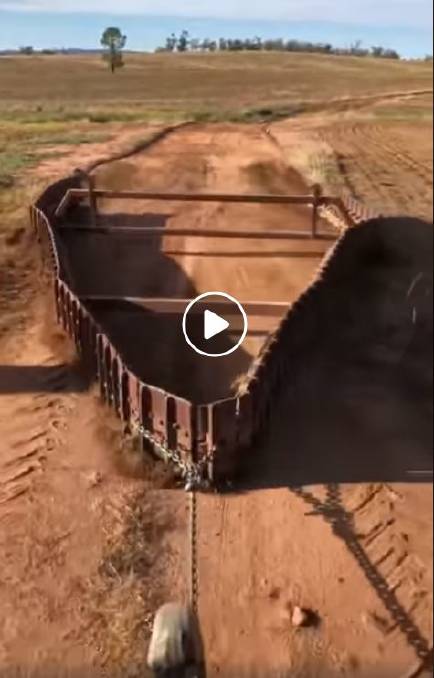 A still from the video

When Matthew asked the Holmes' where he could get a set of used bulldozer tracks, he was told that he could buy them next door to "Noonie Nyrang" at the Wellington soil conservation depot.

With that he loaded up his new Angus bull and drove next door to the soil conservation depot and bought a set of dozer tracks for scrap steel value and put it in the back pen of the truck behind the bull.

The bulldozer tracks were offloaded when they arrived back at Roseville Park and copied into a grader and rock windrower made to the same specifications as the one seen at Wellington.

"It works remarkably well for tidying up the roads around the farm in a quick and simple way," Matthew said.

"But you can only grade the road when it is very dry as the heavy weight of the tracks can take quite a bite and dig a channel down the road."