The long haul from Queensland paid off for two dairy farmers when their cow took the Illawarra grand champion award at International Dairy Week on Tuesday. 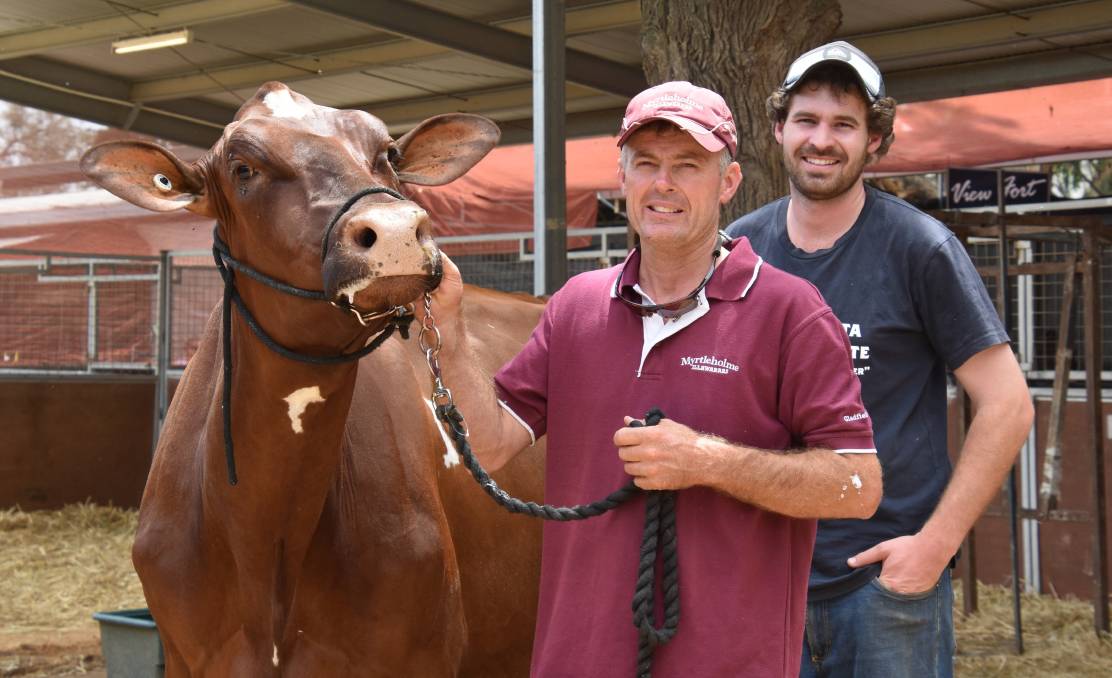 The long haul from Queensland paid off for two dairy farmers when their cow took the Illawarra grand champion award at International Dairy Week on Tuesday.

The pair - Matt Henry, Hodgson Vale, Qld, and Shane Bourke, Gladfield, Qld - have attended IDW for many years but not exhibited before.

"I've always come and helped the Hayes family (Llandovery Illawarras), and we always sit around after judging and say we should have brought a few down, then you go home and never do anything about it," Mr Henry said.

"This year Shane was keen, he was the driving force behind it."

"It's obviously made the trip worthwhile.

"We said before the show we'd be happy if we got one blue ribbon, so to win champion at our first crack is pretty pleasing."

Mr Bourke said it took 18 hours to transport the four entries the pair had in the event.

He was keen because he thought the champion cow, Ovensdale Pearl 534, which Mr Henry and he bought in partnership at last year's Ovensdale dispersal sale, looked in form.

Mr Henry said they chose the cow after inspecting the herd when they were in Victoria last year for IDW.

"They were all dry at the time - so it was a bit hard to tell how they were going to turn out but we thought she was the best type cow there, and we decided she was the pick of them and the one we would buy," he said.

The cow was from one of the oldest and most successful families, the Pearl family, in Rob Newton's Ovensdale herd.

"They are pretty well known in the Illawarra breed," Mr Henry said.

"They are one of the families he rates as his most successful - from a well-established herd that's been breeding for a long time."

Mr Bourke milks 600 cows, about 80 per cent Illawarra, and likes the breed for its placid, high production, calving-ease cows.

"We've always milked Illawarras - they suit the way we farm," he said.

Mr Henry milks 150 cows and likes the Illawarras for the mix of production and management traits.

"They are hardier sort of animal and go back in calf," he said.

"It gets hot and humid in Queensland so you've got to have something that forages well and goes back in calf."

"This is the reason we all get out of bed every day," he said.

"She's got that bloom in udder and seam through the udder."

"She's so special because we bought her as a heifer, as a young calf, and just have developed and worked with her," Mrs Gavenlock said of the cow that was a gift from her husband for her birthday four years ago.

The Gavenlocks' animals are housed with different breeders and Angelina is housed at their neighbour's Ben and Jim Pedretti's farm, where Mrs Gavenlock sometimes milks, so she gets to keep an eye on it.

Mrs Gavenlock said they hope to show Angelina at IDW next year and had already flushed it with the embryos due in a few months.

"We hope to get some heifers from those," she said.

The calf came from one of the herd's foundation families, the Fredas, Zoe Hayes said.

"We don't show many of them.

"She's such a sweet stylish calf; I think she has a good future ahead of her."