A Gippsland bred cow, owned by a Gippslander, was judged grand champion Holstein cow at IDW. 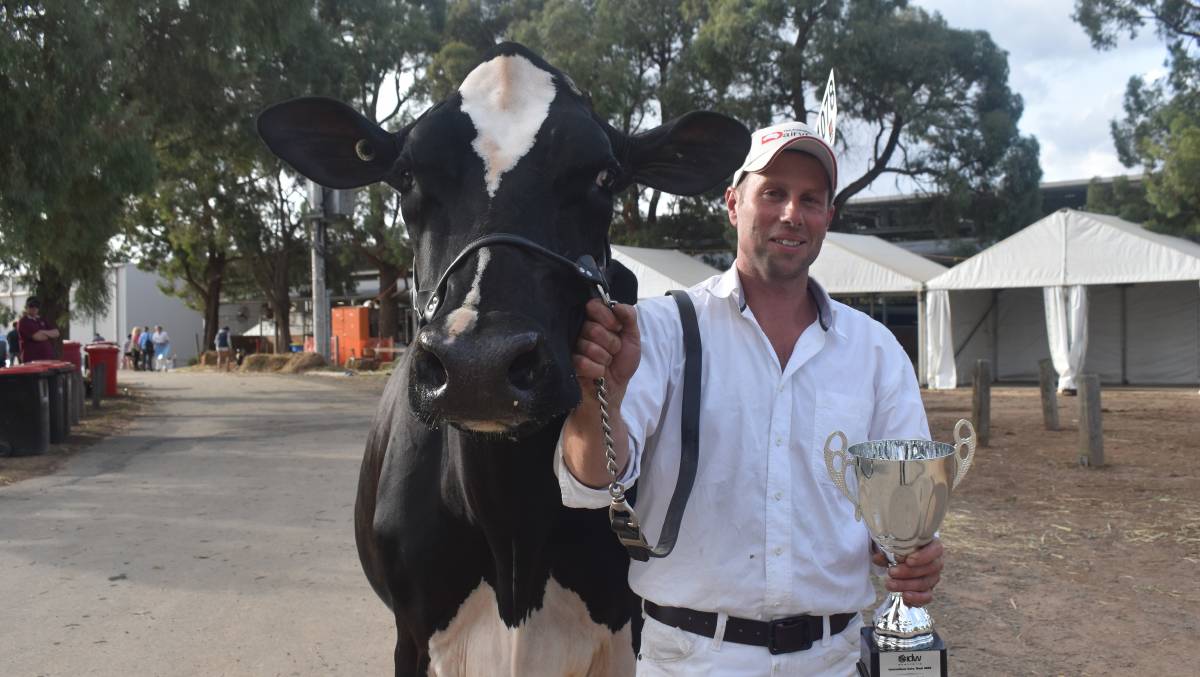 A Gippsland cow bred by the renowned Avonlea Holstein stud and owned and exhibited by fellow Gippslanders, the Templeton family, came away with top honours at the National Holstein Show at International Dairy Week.

Matt and Nicola Templeton and parents Bruce and Jan, Tarwin Lower, were the proud owners of Avonlea Reginald Jacobonia, the senior champion and grand champion exhibit.

Nicola Templeton said they had purchased the cow in 2019 after husband Matt spotted her at IDW in 2019 in John Gardiner's team.

"Matt was walking around and saw the cow and she really took his fancy," she said.

The cow was "very youthful" and had a lot more to come, she said.

"IDW is the number one show. It's absolutely amazing to win because it's an internationally recognised show," Ms Templeton said.

"The judges spell it out every time about how astounded they are at the quality of the animals.

"To stand at the top of the line in all breeds but also in the Holsteins because there are so many great cows."

The Templetons milk up to a peak of 250 and brought five Holsteins and a Jersey cow to IDW.

Ms Templeton said they didn't employ people but did all the show preparation themselves while Bruce milked the herd at home.

"We don't necessarily breed show cows, we breed for good, functional cows. They have to produce milk, that's how we make money," she said.

"We have a very commercial base. It's been ingrained in me that we have to make money from milk.

"We won the pen of three cows which was nice to see the representation of our cows."

Breeder of the cow, John Gardiner, said she was from the Jacobonia cow family that went back 30 years.

He said when he was approached to sell the cow, he knew what Matt Templeton could do with a cow like that.

Judge Brent Walker, Guelph, Ontario, Canada, said there was a fair bit at stake when judging.

"You just want to do a good job and everyone thinks they had a shot," he said.

"She (the champion Holstein) is a complete package. She's not a young cow, she has calved multiple times, she's really good uddered and strong - just a really good cow," he said.

Mr Walker had previously judged the junior youth show, the Holstein show twice and the Jersey show once.

Steven Hore said it was the two-year-old's first show.

"We concentrate on showing in-milk cows," he said.

He said the cow's mother Elmar Goldwyn Jessica 11, was champion Holstein cow at IDW in 2018 and supreme cow that year.

Mr Hore said the Jessicas were their strongest family and had been "very successful" at IDW.

"The show team is nearly all Jessicas," he said.

"We hope we can bring her back again. She was 5th in the state in the Semex on-farm competition.

"We've been showing for a long time. We had a small team of milkers this year. We try to show quality and look after them."

The cow was bred and shown by the Cherrylock Cattle Co, of Brad and Jessica Gavenlock, Tallygaroopna.

Judge Mr Walker said in the class judging that the eventual winner "comes to the top, she's is a very clean heifer, open rib, beautiful leg - she's a heifer that's pretty hard not to like".

Brad Gavenlock said the heifer's grandmother was a Schottle-Chassity from the United States, known as the $1.2 million cow.

The Gavenlock's purchased the dam, Chassity Atwood, in the US and imported embryos to Australia, producing the winning junior.

He said the heifer was due in April, "hopefully for the Winter Fair".

"She has never been beaten at any local show."

He said the win was a "special feeling" with the heifer's breeding background to take the ribbon.

Nine years ago they visited Butler View Farms where the grandmother was and had their photo taken with her.

"We said one day we would like to own something out of her. We bought the daughter and now have the Chassity heifer," he said.

The Templetons also had an interest in the intermediate champion Red & White Show Holstein along with Menzies Farms. The cow was Cairnsdale Absolute Red Delight. The reserve was Bluechip EV Shesaawesome Apple, shown by Cherrylock Cattle Co.